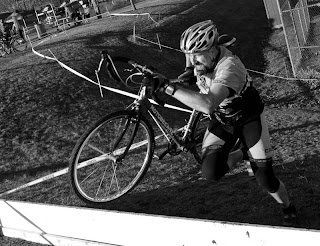 I think that racing is super fun, but it would probably be a whole lot more fun if I could just get a little more "oomph," a little more Eye of the Tiger..

I've got a plan to do just that, but that's for NEXT season... 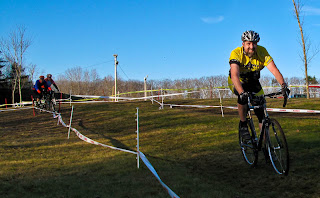 Focusing on this season, this past weekend's BayState 'cross race (full name: BayState Cyclocross, Round 12 of the Verge New England Cyclocross Championship Series, UCI Cat 2, Presented by Spin Arts/Stevens Cycles, Gear Works Cyclery, and The Mid State Cycling Club) was another opportunity for me to push the limits of human athleticism. Instead, I found myself pushing my bike up a sloppy, muddy hill. But, I'm getting ahead of myself (something many of the people I raced against also did... get ahead of me... that's almost a pun).

I was originally signed up to race both Saturday and Sunday-an ambitious agenda, my wife thought. She's right, Anyway, due to a confluence of factors, not the least of which was the torrential downpour I heard as my alarm went off dark and early on Saturday morning, I skipped out on Day 1. Ironically, by the time I did roll out of bed, the skies had cleared and I heard that the start of my race was bone dry. D'oh. That's okay. I had a little more time to get my stuff together for Sunday's race (Sunday, Sunday, Sunday!), so I was able to get to bed at a decent time and hopefully be well rested. 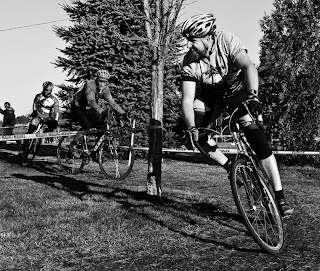 Sunday morning came early (as almost all of my mornings do), and G-Roll (AKA G-Money, AKA G-Rad, AKA Glen) arrived at my front door so we could carpool to the race. We had our directions spot-on this time and didn't waste any time on any wild goose chases. In fact, thanks to Glen's driving tip, by taking a few extra turns-we shaved about 10 minutes off the drive time. Bizarre!

Glen's race was much later in the day, so he had plenty of time to chill. I, on the other hand, had to sign-in, get my number, and take a quick warm-up spin. I don't typically warm up before a race, and I think that's going to change...Anyway, this time around, I did a half-lap of the course and found my way to the BACK of the staging area. 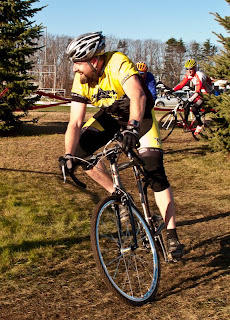 My primary goal with any race start is to avoid any crashes or mishaps, and I was able to do that once again. The course started on a fast crushed stone track... we went around about 1/2 of the track then made a tight hairpin turn onto the grass. From there, it was a typical 'cross course, with plenty of tight turns, grassy straight-aways, a couple of run-ups. One of the "run ups" was sort of a "slog-up" as it was a slick, slippery, muddy hill. SOME riders were able to ride up, but most did not.

Overall, the course was fast and fun. Unfortunately, I was neither. Oh, who am I kidding? Of course I was fun! It's the "fast" I've got to work on. Although, depending on how you look at the results, I didn't do that poorly. I did CRUSH five other racers. And, in my class, I was the top finisher from Massachusetts' "North Shore" region. It also appears that of all the men's classes, I was the highest placed racer with a hyphenated last name. I can only imagine that the sponsorship offers will be rolling in any minute now... 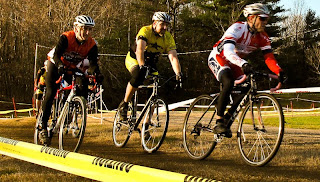 Thanks to Glen for documenting my efforts photographically. I look fast, don't I?

After my race, it was time to hang out and watch Glen get ready for his race. I ran up and down the course shooting my trusty Canon G10 and I'll be posting a little slide show once I sort through the pics and eliminate the crap...

With this race done, it appears that there is only one more race on the calendar for this season that I can get to-the Ice Weasel! See ya in Wrentham!
Posted by David Alden at 7:25 PM