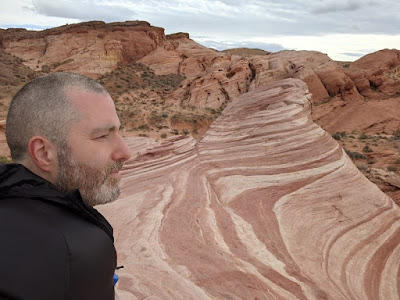 Yes, Yes I know.....another post on the Southwest, but hear me out on this one. In my previous article, "The Goose and the Hoodoo," I highlighted Jesus and I's adventures on Zen, Gooseberry, and Thunder Mountain, but it left me incomplete. Was it more exposure? More climbing? or more cowbell that I needed?
Read more »
Posted by Jason Fitzgerald at 4:30 PM No comments: 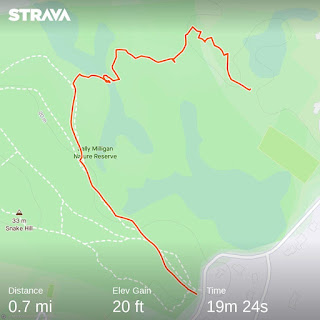 Check out my walk on Strava.
https://strava.app.link/yQwjKaoqPlb
Posted by David Alden at 2:52 PM No comments:

Ok, so this is only a few months late...we had a baby and stuff!

In December of 2019 I entered the Leadville 100 lottery on a whim…and got in.  Little did I know, that was going to be the start of over a year and a half of training, race postponements, more training, pandemics, expecting our first child, moving and a whole bunch of other stuff…

After getting the notification that I ‘won’ the lottery in January 2020 I started training.  I’d never done a ride or race quite like what Leadville is all about.  My plan was to do the Wilmington Whiteface (Lake Placid, NY) race which is a qualifier for Leadville.  Since I was already in the race, a good performance would have moved me up in the starting grid and been some good experience for a race of that type.  By all accounts, Whiteface is the qualifier that is most like the Leadville course.  Needless to say pandemic happened and it got cancelled.  I was still hopeful that Leadville was going to happen but not surprisingly, it too was cancelled in 2020 (along with pretty much every other amateur bike race in the world).  I was able to defer into the 2020 race at the cost of a donation to one of the charities that the race supports.  2021 rolls around and my plan is the same:  Tons of training and Whiteface to get my starting position moved up.  Well, Whiteface again got cancelled (well moved to the fall) and Julia and I had some ‘life events’ i.e. expecting a child and moving.  Needless to say I had a busy spring and summer…

So, we arrived early enough to pre-ride the course, over grass, some roots, through a barn or two, a corral thing, ups and downs. I thought it was a super fun course, and it is not like any kind of riding I have done before.

I was, of course, in the Men’s Cat 5 heat, I felt special at the start area because mine was the last name called! In the back row naturally.

The start signal goes off, and we are off, I’m trying to keep in contact with the second group, mostly failing, until we got to the corral thing, I mashed it thru that to catch them, almost ran into another guy, slammed the brakes, now I am in the wrong gear, and the pack motors off into the distance.

Most of the race I am kind of alone one the course, keeping ahead of at least one guy, trying to get better at my dismounts, my remounts remained abysmal and slow! That jumping and landing on your seat looks possible, feels impossible! At some point in my second lap, a guy comes out of the pits and pulls in behind me, I pass another guy who stopped on the course, no idea why. So, now I am trying to stay ahead of these two, racing right? Cross the finish line at the end of my second lap and the bell guy looks me in the eye and rings the bell with vigor! Last lap, can I stay ahead of these two guys? Well, the answer is no, on the long start straight, down in the drops, pedaling as hard as I can, those two breeze by me, racing right? Well, I finish my last lap and “blast” past the finish line in the drops, going fast-ish.

Whew, I finished, no crashes, did not ruin anyone else’s race, third from last!! I will do this again, I might not ever be “good”, but it is super fun on two wheels!
Posted by David Alden at 9:29 AM No comments:

With the race happening in my proverbial back yard, I had to do it, lack of training or semblance of fitness be damned. In fact, the entirety of my "training" for the race consisted of the one-lap pre-ride I did shortly before the start.

If you want to skip past my ramblings and see some pics of my teammate/work colleague/bro, scroll below, but if you want to subject yourself to a tiresome description of the course, read on.

Read more »
Posted by David Alden at 9:21 AM No comments:

It's 2021, we're hopefully moving past COVID and moving towards some return to normalcy... more to come!
Posted by David Alden at 7:22 PM No comments: