At the front... for now. photo by Jamie Ryan-White 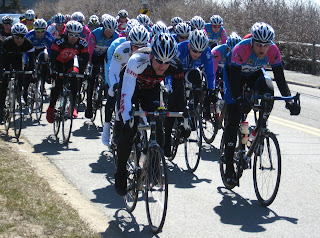 Oh hell it was cold out. Jumping out of the car to run the 20 meters to the registration table made me cold. I hadn't warmed up from loading the bike and gear into the car anyhow - but still. 9:00am and 26 degrees. Are you kidding? Throw in a side-ways wind, right off the ocean - and bam! It was cold. That's all I'll mention of it, and relay my billy-bad-azz "Harden the f#@& up" approach, right-quick.
The short version / back story about me and road racing is this: I got really into mountain biking. and racing out west - like from beginner to expert in two seasons, and to train for expert, I needed some road miles. A lot of them. Hard, fast, long. Then what happened? I grew to really like road riding too! Nothing sharpens the top end like fierce training rides on the road - and racing is even more decidedly evil / brutal / awesome. So there you have it. I do enough road races to know how to be careful and handle myself - but as a 40+ year old guy, I'll not ever try and contest a bunch sprint finish. Hanging with the main group is an achievement for me, and was the goal for this weekend. A guy can dream, right? 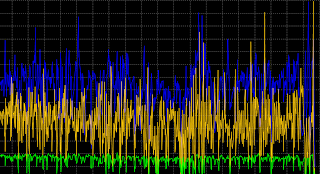 The power / truth hurts! (click for full data)
I've got no clue about basketball - but know that with temperatures climbing into the 40's and above, it's damned nice to be back outside on the bikes again. This last week I had 3 solid rides; 50 miles last Saturday, 38.5 miles on Wednesday Evening, and then today just shy of 60 miles - and well into New Hampshire to boot. Mix in a few morning road bike / rollers sessions in the basement, and it feels like 2011 is off to a good start. 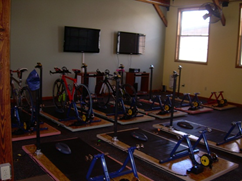 Who's in? It's paid for already - so just show up and get ready to throw down.