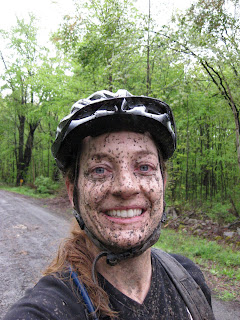 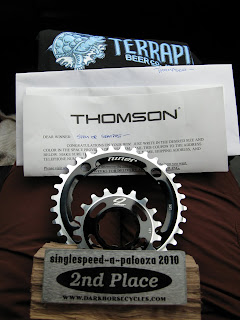 This past weekend I tried my legs out on the Singlespeed-A-Palooza Race in New Windsor, NY. Yup, a single speed only race with 250 one gear, mostly rigid racers ready to tear up the 25.5 mile course. We showed up the day before to pre-ride the course and found it fast, fun and swoopy...just what a single speed course should be. Too bad the rain came in over night and turned the surface into a thick greasy mud! Thankfully, I played it conservative and changed my gear ratio from 32:17 to 32:18 to fight through the muddy mess. Anyway, here is the play by play:
When we woke up on race day it was steady rain and in the 40's. UGH. With faint determination we made it to the race and were ready to go for the 9:00 start time. 8 Minutes after the Expert/Pros took to the course, I was off! Rosy, a cool girl we met on the pre-ride, had the hole shot and took the lead (or so I thought...more later.) She was riding a 2:1 gear ratio which gave her great advantage on flat terrain, but eventually caught up to her on the muddy climbs. After a few encouraging words, she let me take the lead (or so I thought) and I managed to get into a groove in spite of the slick course. With dirt in my belly and mud in my eyes, I finished the first 12.75 mile loop feeling pretty good.
Starting my second loop I could feel a "fullness" in my legs on the climbs. Uh Oh...the cramp monsters! I stopped, stretched, downed a TON of fluids and ate two GU's. Unfortunately I think it was a bit too late. For the remainder of the race I had to take a couple of quick stretching breaks to keep the monsters at bay, but at least they stayed at bay! Anyway, I came up to a girl along the second loop and thought, "Hmmm...am I catching an expert here or was there someone I didn't see?" Turns out she was an expert and let me know that I was actually in second place and the first place sport was WAY out ahead. Wow, that sucks. Oh, well...onward! I caught a second girl fairly quickly and thought that maybe, just maybe this was the sport girl, but it was another expert having a bad day with crashes. Pretty soon after, with more dirt in my belly and mud in my eyes, I was done! Second Place Sport Woman!
I'm still baffled that I missed seeing the first sport girl take off, but it isn't all that unusual for me to be oblivious to my surroundings. She was probably with us ladies at the line-up the whole time and I just didn't see/talk to her. But a mystery remains for me because Rob is sure he passed her early in the first loop. I have to admit that the start was confusing because we were told via email to start with the Sport North men, but there was a small sign at the starting line-up that actually put us behind them.
No matter! I came home with a new Thompson stem, cool trophy, t-shirt, water bottle, and a belly full of hot dogs, beer and dirt! Good times!
Posted by Renee at 7:21 AM