Sunny and dry out? I'm riding!

I nearly wimped out of what turned out to be a great ride this morning. Damned weather forecasters make any weather sound menacing, unforgiving, and somehow hazardous. It was fine outside. The only 'real' wind I encountered was off a big pond / small lake over in Boxford. Otherwise? Perfect mid-winter day for a ride! 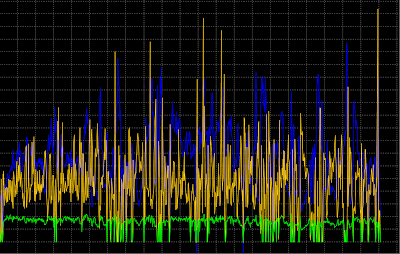 With Tour of Battenkill approaching fast (and the Michael Schott Circuit Race in Marblehead, MA) I need hills work. I need speed work. I need fitness, power, endurance, and and and... well, and everything. At least I didn't gain too much weight this winter (yet?). Battenkill is hard in a few ways - mainly that there are a lot of steep / power climbs, but most are not too long. Three of them are, however, and the only way to train to climb is to climb, right? Oh - and two of those three are DIRT! Nothing I can do about that quirk - as they aren't too loose or gravelly, but may be this year. Who knows.

Anyhow, today I stayed sort of close to home. I ventured north to Georgetown to spy on a house Dave and Jean were to look at, then headed back to the local loops and hills here in Topsfield and in Boxford. There is an AWESOME climb in Goergetown on Rte. 133 - but it's rather a busy road to ride on mid-morning or daytime in general. Oh how I forgot how deliciously painful it is though! Long, steep, and hard. The route I followed brought me to the top of it on local roads, where I then rocketed down into town, and made a quick 'lollipop' loop through the neighborhood / street the aforementioned house was on - then? Right back up this beast! At the top I turned back onto local roads (Baldpate Road, I believe) and disappeared back into the rural environs I snuck out of.

All alone on the road... 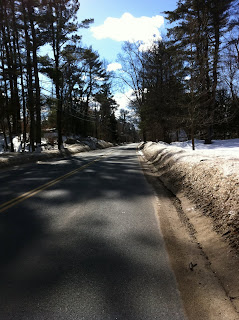 On the way back towards Topsfield I started riding some of the harder / looser / rougher climbs in the area, which never seem to get any easier. When I post up here that I can hammer these hills, I'll know I've accomplished something. Winding up and down and through these lovely areas it was hard to feel too much pain as it is striking - even in mid-winter gray tones. Classic old barns and tasteful New England farmhouses abound. Spring can't be far because the maple tree sap guys are out setting up collection spots already! Mmmm.... maple syrup - which I have a real weakness for - especially the grade B stuff, as it's darker, richer, and less refined and aqueous than that over-rated ubiquitous 'grade A' stuff.

I digress. This day also marked the maiden voyage on the spankin' new KHS frame and full carbon Alpha Q fork. God - even with my heavy PowerTap training wheelset this bike felt light, fast, and snappy. Just the right amount of dampening through the carbon seatstays but quite stiff on the brute climbs. I'd say the ride is 98% dialed - just need to tweak the saddle position a touch, and center the stem/bars over the front wheel. This is a problem I've had for decades - an eyeball that's awry in terms of getting the stem parallel to the front wheel and frame. No idea why, as I'm an orthogonal addict in all other areas in life... none the less, the ride was great and she'll be an absolute ROCKET with my race day day wheels on her.