J-Rock and G-Roll get it done! 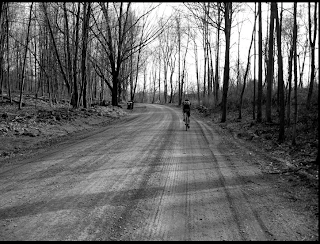 If this is what real road racing is like - then mountain bikers take note; it was bad-ass. I have never, ever, never been so worked over after a race - any kind of race, except perhaps my one and only 24 hour solo effort in 2006 - an effort that netted 215 miles and about 16,000 feet of climbing. That was also Mr. - Thirty - Six - Year - Old - No - Kid 650+ hours a year training Glen. The current, 41 year old 200+/- hours a year training full-time Dad version seems to have a harder time making repeated hard efforts without blowing up.

Team Racer-X / The Nationals Project rolled out of Salem, MA on a lovely spring afternoon and headed west. Destination: Skellie Road / Battenkill Region (It's a river) pre-ride, and packet pick-up. Skellie Road is the new section they added this year. No surprise it was more hard dirt road climbing, more beautiful farm lands, and more sick, fast, white knuckle drool and eye drip inducing descents. Felt like it would add some time, though little to no distance - to last years course.

When we got to Cambridge, NY where the event was staged out of, it was jam-packed with racers and families doing their thing. It had a great festival atmosphere and a huge vendor / expo area in the downtown's historic Railroad Park. Registration was a snap, numbers and computer chips were gotten, and off we went to pre-ride some of this southern Adirondack goodness. Found a parking spot right across the river from where we'd be turning off the "main highway" onto this newly added stretch of farm roads. Rough old pavement and smooth gravel were the surfaces we saw - no surprise, and there were two medium scale mom-and-pop dairy farms out en route as well. And a lot of racers pre-DRIVING the course *cough cough* perhaps at a higher rate of speed than was necessary. Thanks! Sure enough, after all of a half mile of flat road, the race route markers pointed left. They should have pointed at a diagonal - up and left, as we soon were climbing a steep little kick. Crested the top and pedaled along for about 25 minutes, then turned around and headed back to the car via a slightly easier route. My comment was that the whole race felt like the section we had just ridden - so now there was simply more of it!

Headed back to Bennington, VT via a wild goose-chase of a GPS navigation screw-up, found motel, left dome light on in car, and hit the hay. Sure enough, woke up and car battery was DEAD. I roll-started the trusty Subaru but she was not happy. Chug-chug-chugging and lacking all power. Oof. I took a leap and shut her down, counted to ten, and re-started her. Presto! Worked like new again, thankfully. Drove the 25 minutes back to Cambridge all suited up and ready to race, parked the car, and dropped off spare wheels for the chase car. Our 150 person Master 30+ field looked huge - but paled in comparison to the thousands of other racers. 2 CAT3 groups, 2 CAT4 groups; 2 CAT4 35+ groups, and so on...

The race had a neutral 1km start, and off we went - right at 9:30am. Weather: Perfect. Bike: Perfect. Legs: Good. Within 5km a 3 person break went off the front and everyone seemed to let the break-away team-mates slow us all down. Ridiculous. A few of us started yelling about said situation, and folks started NOT letting the Corner Cycles (CC) guys simply get on the front and choke us down. Not many takers at first, but eventually the pace lifted and the break held at a maximum of 1 minute 20 seconds or so. The CC guys were relentless for a while, letting the pace rise, rolling up the outsides of the peloton, then easing across the front. One just had to keep an eye on them, and the pace - and all was status quo this first 45-50 minutes or so.

When we hit the left, right, right that signaled the new Skellie Road stretch - we could see the lead car and a fading break-away just ahead. Within the next 5 km I think we reeled them all back in and had a race on our hands. I'd say about half of the 150 person field was till together here, including myself and J-Rock - but then as hour 2 approached, there was some attrition. Crashes, flats, and implosions equally took their toll, and with 20km to go - there were maybe 50 of us left. On the second to last climb, on a STEEP, painful kick - I was grunting, bobbing, weaving, and yanking those pedals around in squares when I heard a high-tension PING/TICK sound. As soon as we hit the next descent, the follow-up to that oddity was a wicked pssht-thwack, pssht-thwack, pssht-thwack coming from the front wheel. As was a nasty wobble! Broken spoke or two, it'd seem. Oof. I babied it for a while and eased back to the back where I could keep an eye on the wheel truck. Made a front wheel switch and chased like the devil to catch back on - but never did. Ahhhh - what a relief! I felt like hell and was all the sudden sort of dizzy and wired and had zero juice left in my legs, just as I headed up the last climb - and put the last nail in my coffin; Stage Hill Road. This beast is brutal. Starts steep, stays steep, eases off to medium steep, then stays medium steep and then eases off to a false flat - all the while draining every last drop of one's soul right out. 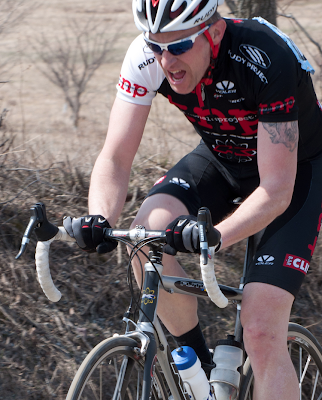 I crest this hill in no-mans land. I pass folks really hurting, but get passed by folks who still had something left in the tanks - but otherwise descend to the flat roads into town, spin on in through the lumpy bumpy finishing km, and finish it up. God I was wasted - between the repeated insane efforts and a slight mistake under-feeding, I was almost incoherent. The finishing chicane presented a wildly complex set of problems to solve to exit, and then I started riding in the direction I thought the car was - and at the edge of town realized it was on the other side of town - so headed that way, the whole time challenged by pedestrians, cars, and of course - gravity. I finally find the giant field of cars and start the chattery traverse to ours. Water. Chocolate Milk. Vanilla Milk. (2) Fruit bars. (1) Clif Builders Bar. More water. Rinse off, change, and sit down / recline in the front seat. About 10 minutes later I'm able to rally the necessary oompf to pack the bike, gear, clothes, and all that other crap into the car, and head over to the wheel-dump area to return my borrowed wheel, pick up my broken one, and retrieve the un-used rear wheel.

Then I slump back and recline that drivers seat and sort of doze off.

About an hour after I return, a gaunt, thrashed, almost super-humanly tall figure approaches the car ever so slowly. Jamie too has survived! I hadn't realized how much time had passed and started getting angry - assuming he had finished the race, chowed down at the expo area, chatted with other cool-dude racer buddies, grabbed some (non-alcoholic) beers, and THEN returned to the car. Alas, mechanicals and demons were his demise this fine day - but riding through to the end despite the enormous challenges. Long live J-Rock! This is one for the books - and I'm so stoked we survived it intact, and together.

So here ends chapter two in the 2011 season; Marblehead: Done. Battenkill: Complete. Next? Off-Road at the epic EFTA Weeping Willow Race at Willowdale State Park. Then I think 2011 will wind down the majority of G-Roll's short but sweet racing career - where I'll make a far more occasional, fun appearance. If it's local (i.e. I can ride to the race) I'll do it - especially if it goes by my house (like the Topsfield Circuit Race in August). In the meantime, Easton is sending me some parts for my wheels and the mighty KHS machine will be ready for the rest of the summer fun: Salem and Beverly Crits, the aforementioned Topsfield Race, the informal ECV TT series, and perhaps the weekday-evening "Working Man's Stage Race" early in the fall. Otherwise - if you follow me on Twitter, my iPhone Ride Tracker App posts a tweet at the start of every ride that allows you to watch my ride progress real-time - both on and off road. Cool, eh? Look for me @glenzx over in the TwitterSpere. Anyhow - looks like I was officially 49th place - which was the slowest of the fast / lead group, or - the fastest slow guy in the race ;-). To have only been 9 minutes off the winning pace after the wheel problem and the implosion, I'm ecstatic. Only a couple minutes ahead was none other than Johnny Bold - a multiple National CX Champion!