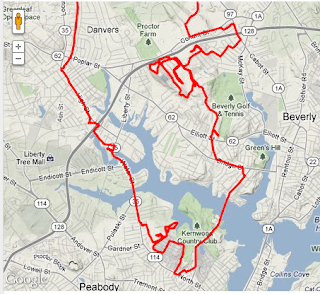 In an upbeat mood, I suited up and went for a mixed-bag sort of ride. Trails, roads, and indeed - some minor bushwhacking. The weather reports made a whole lot of noise over nothing, as it was 40 degrees outside and barely, I mean barely - precipitating.

Goal was to get 2.5 hours of miscellaneous efforts - tempo, hills, mud, grass, easy cruising on the road portions that connected the fun parts, all on the 'cross bike. Jamie had plotted some fun routes these last few weeks - also with plenty of bushwhacking (and poison ivy), and on my own today I connected up some northern sections to add to his pretty well established connectors.


Starting out from Topsfield, I meandered down towards secret training grounds location No. 2, waved at our friends on King Street on the way - and headed back through Danvers to Beverly and eventually home in Topsfield. Favored steady-state / hard mud sections were included - as well as a spooky abandoned neighborhood - Nike Village "the 1950s-vintage Nike missile base" that is now mostly abandoned, aside from maybe 8 or 10 nice houses on the other side of the fence. Here's a site with some photo's that show a section of it - though fall short, in my opinion - of communicating the feeling of the place

Anyhow - here's the route, and when Jamie and I get a real gem of a ride cobbled together, let's plan on a bigger racer-x group ride when the weather gets better. In the meantime, feel free to peruse the data - though the wattage coming out of this here 180 lbs. cottage is far higher than what Strava estimates: