Burlingame Had a Battle. Too Much Work to Find Out If It Was "For" "At" or "Of".

I went to the Battle this past weekend and had mixed feelings.  The people that put it on really put it ON!  There was a finish chute  and a crowd and a bunch of volunteers that looked like they enjoyed what they were doing.  I don't know if they did, put they certainly put on the attitude of sharing in a good time even though they were trapped behind a registration desk, standing in the woods, or stopping traffic at the crossovers. There were tons of kids cheering when you came out of the woods and a fair amount of NBX guys willing to trade one sentence conversations with you out on the course.  In the end, I believe it's how you feel about a race the next day that really decides if you'll do a race again and on Monday I was sure I'd go back next year.


For my part I followed the website's advice and decided to camp at the park.  I got out of the house with my family on Saturday morning and after spending some money on some newly minted Providence College gear for my newly minted Providence College fresh(wo)man daughter we rolled into the Burlingame campground in the late afternoon.  The park itself is beautiful, the people who work there are really cool, and the weather was awesome for camping. 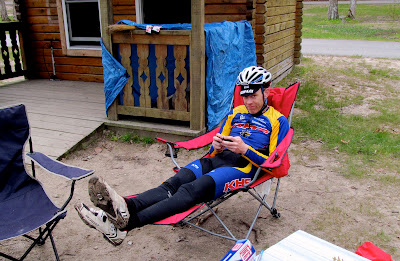 I headed out onto the course to check it out and was kind of disappointed but also kind of excited.  I was hoping for something like the Burlingame TT course but quickly realized (as I lay on the ground in pain) that many sections would require me to run the bike.  Which sucks because I have the back of an eighty-two year old. 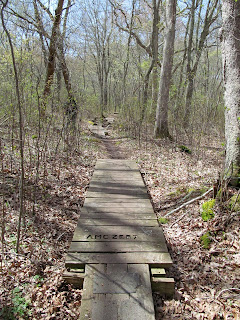 At first glance, I thought I could ride the bridge section. 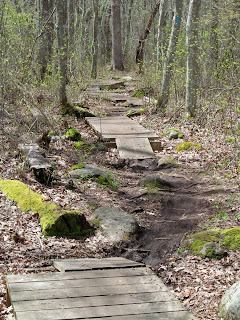 I was overly optimistic.

I knew I couldn't ride any of the rocky ridge section.  I was right.  Plus there were trees all across the trail, some I rode, some I dismounted and scampered over.  Some were on descents which just seemed in poor taste to my non-mtbing self.  However, if that's how you guys roll then so be it.  I will say there were not a few riders out there not happy with it.   I reasoned that if this is what I had to go through to get to the enjoyment of riding the sweet smooth ascents then well, it's not like I was there to win anything or cure cancer. 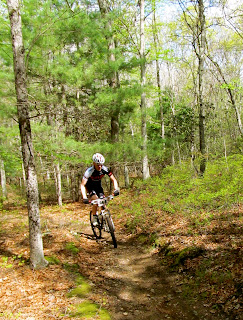 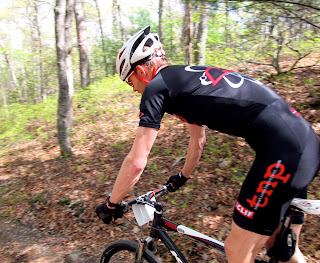 Down, down, down, meh, I guess some people enjoy it.

My only real complaint is the hard left corner that wasn't marked on a downhill so I went flying by it on my warm up lap Saturday.  As did the guy behind me. 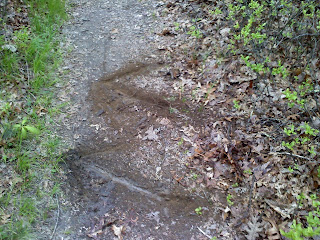 Did I have to mark the course with a stick and some, errrr, recycled water? I did.

Like many spots on the course the turn was completely counter intuitive. I went back up and marked it but then missed it on the first lap of the race on Sunday and came across a ten year old girl who missed it too.  It's one thing if I get lost but you can't have little kids out in the middle of nowhere because the course wasn't marked properly.  A piece of pink tape tied onto a tree branch doesn't do it. To the credit of the race crew they were out there marking it with tape across the trail and some arrows when I came by on my second lap.  Perhaps after a mom or dad got in their ear?  Doesn't matter.  If you make a mistake, you own it and then fix it and that's what the race crew did so job well done. 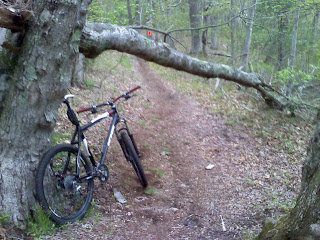 Luckily this obstacle (to anyone over five foot five) wasn't directly after turning onto the trail off a mad-fast slightly descending fire road.  Oh, wait a minute . . .


My race itself was actually pretty awesome.  I felt really solid and in control for 99% of it. I ran negative splits by over two minutes for my two laps and didn't crash at all.  If I hadn't missed my start time by half an hour I probably would have done pretty well.

The drive home was uneventful until a backpack came flying off the roof of our car.  We went back a couple hours later and managed to pick everything up off the I-95 except a pair of shorts and a pair of socks.  I really wanted those shorts but the sucking wind vortex created by an eighteen wheeler is very persuasive the third time one goes by at 75mph.   Let me just say, a four lane highway is a lot wider than it looks while you're driving down it. 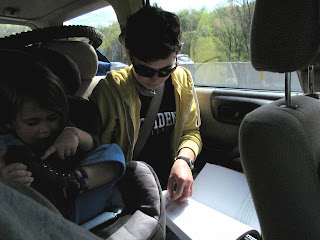 The big one suffers from acute and debilitating senoritis but is STILL studying for her AP exams.
The little one is counting her toes INSIDE her boot.
More impressive?  Discuss.