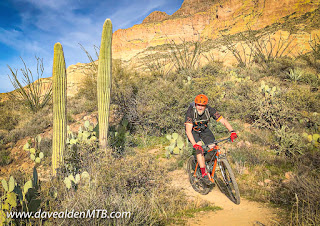 I’ve never been one to shy away from biting off more than I can chew, so when Glen tossed out the idea of a one day epic 100-mile ride along the very remote Arizona Trail, I was in. I even started to train for it, but then, well, life got hectic, and “training” turned into drinking lots of coffee hoping that it would be a suitable replacement for proper sleep, diet, and exercise.


I flew out of Logan airport bright and early on a Thursday morning. My 6am flight required a 4am wake up and the early morning’s snow and ice erased any wiggle room I had in my schedule, and I boarded the plane without being properly caffeinated. Six and a half hours later I was getting my bike and gear from the baggage carousel, getting my rental van, and heading to the hotel to meet Glen who arrived a day in advance. 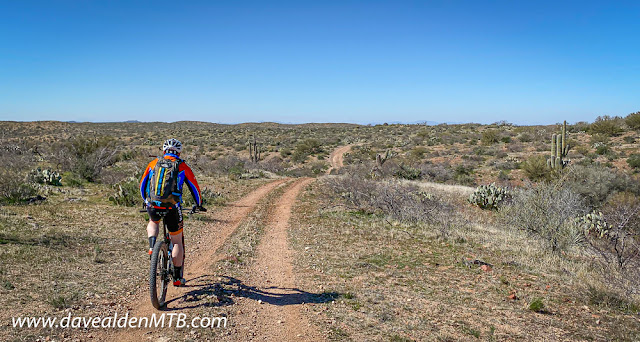 Sadly, I’m a bit out of practice when it comes to re-assembling my travel bike, and it took me a bit more than an hour to be mostly up and running. I did need to pick up a new quick link so we headed to a local bike shop before hitting the trails. Yeah, up at 4a, 6.5hr flight, build the bike, and get out there for ride. We made the hour drive to the Picket Post trail head and... realized that Glen had left his shoes back at the hotel. We cruised out for a few miles, but to be honest I was fairly delirious at this point, so a slow 5 mile ride was perfect in my mind. I had spent a total of about 10hrs in planes and cars so I was one beer away from passing out. 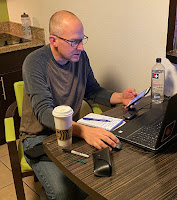 When I woke up Friday morning, Glen had already been up and out on a coffee run and was plotting our rides.

The original grand plan was to ride a portion of the Arizona Trail, from south to north, starting at Tiger Mine and ending at Picket Post. There was also a “race” going on on the same section of the Arizona Trail, the Gila 100, but starting and finishing in the opposite direction.  Glen’s meticulous calculations had determined that the northern direction would be more fun.

With a loose plan in place, there were still some logistical challenges. First, because we were out there without a “support team,” we’d need a car at both the start and end which would involve driving to the end at some point and then driving to the start, riding 100 miles, and then at the end of the ride driving back more than 100 miles to pick up the car at the start all before then driving back to the hotel. That’s independent of the fact that the start of the ride was about a 2hr drive from the hotel. So, presumably, if we dropped the finish car off ahead of time, and we wanted an early start for the ride, we’d be looking at getting up at about 3am to be up and on the road and ready to ride by about 6am. My eagerness for this epic was starting to wane. 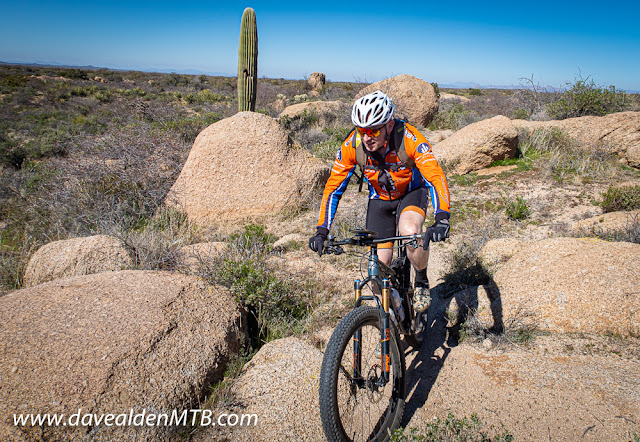 The next obstacle to consider was the “pull the plug” option. Let’s say, for example, for some reason, I wasn’t in good enough shape to do the whole ride, and 60 miles in, I was crying next to a cactus. The trail is REMOTE and in a “best case” scenario, it would be a ride of several miles (10? 20?) to get to “civilization.” I had planned on being prepared by bringing an emergency sleeping bag and updating my Spot… As I was putting together my bike pack, and including things like a trauma tourniquet and quick-clot gauze, Jean was making sure my life insurance policy was up to date. 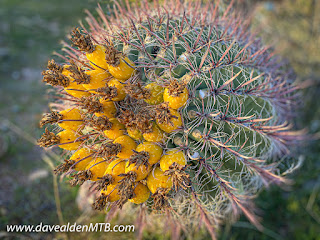 All that being said, I was still willing to make a go of something. We thought maybe rather than a 100 mile ride, we could logistically make a 60-ish mile ride more simple. So, Friday we drove to the Kelvin Bridge trail head dropped off a car, then drove down to the Freeman Road trail head. Glen connected with his cousin and was able to get some supplies that he had mailed to himself ahead of time, and while he remembered his shoes this time, he did forget his riding jersey. (#rookie).

We took off and all I can say is that the Arizona Trail was awesome. The riding was remote, beautiful, fun, challenging, and everything that mountain biking should be. We rode just under 30 miles of amazing desert single track under perfect blue skies. 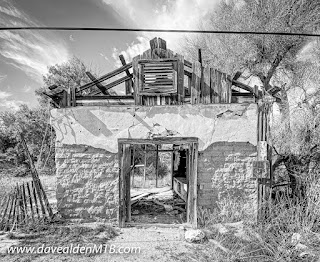 The post-ride beers were delicious and the only thing left to do was to drive back to the start to get the other car and then drive back to the hotel… In total, that was about 5.5hrs of total driving time for the day… And, unfortunately, I got back to Phoenix too late to connect with Jason Fitzgerald who was also in the area for some riding, but was flying out that night.

Anyway, for Saturday, we decided to stay more local and check out some of the trails at McDowell Mountain Park in Fountain Hills. The park has a dedicated “competitive track” for mountain biking at “speed,” and consists of a Long Loop, Sport Loop and Technical Loop, all starting from a huge parking lot with shade tents and rest rooms. 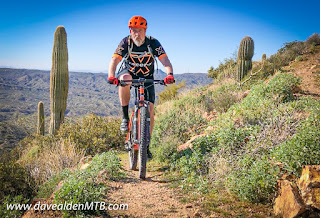 The trails were fast, flowing, and fun. With more time, I’d love to check out the rest of the park, as the competitive track is only a wee portion, but for someplace to ride that doesn’t require any planning, this was awesome.

Our post-ride discussions got back to how we could possibly make the big ride happen, and we came up with a solution. The first key was that I wouldn’t attempt it, and would instead do logistical support. The next big step was that Glen would stay at his cousin’s house near Tucson and he’d get a ride to the start at Tiger Mine. I’d drive to the Freemen Road and Kelvin Bridge trailheads and then finally to Picket Post. That way I’d be on hand for whatever was needed along the way. Based on our ride on Friday, it seemed that cell service was pretty strong and if Glen didn’t show up approximately when I anticipated, I’d be able to go out to identify the carcass. 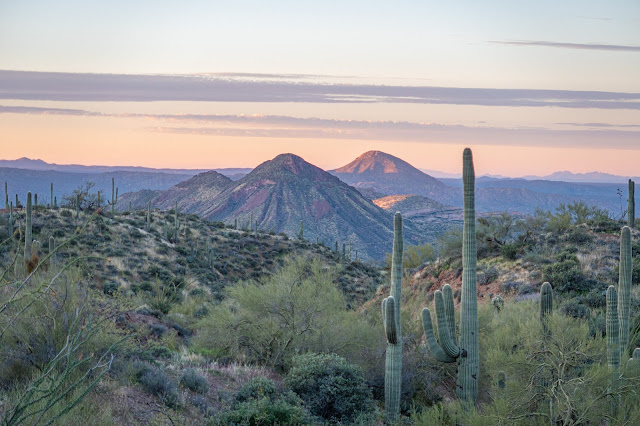 With that settled, I drove Glen down to Tucson and then back to the hotel, which resulted in another 5hrs of driving… I should note however, that the Dodge Caravan I rented was a great van, and if I didn’t need a vehicle that could tow a large trailer, I’d be all over the mini-van. Sunday morning I got up and headed out to Freeman Road to await Glen’s arrival. I honestly had no problem spending a leisurely day cruising around Arizona. I took some pics and really just chilled. While waiting for Glen, I (we) experienced quite the sonic BOOM from a fighter jet that flew by at well over the speed of sound… I did get a bit antsy while waiting and cruised out for what I hoped wouldn’t be a search and rescue, and fortunately, Glen rolled around the corner and completed the first leg without a hitch. He said the sunrise from the trail was amazing, and I’m sure it was. 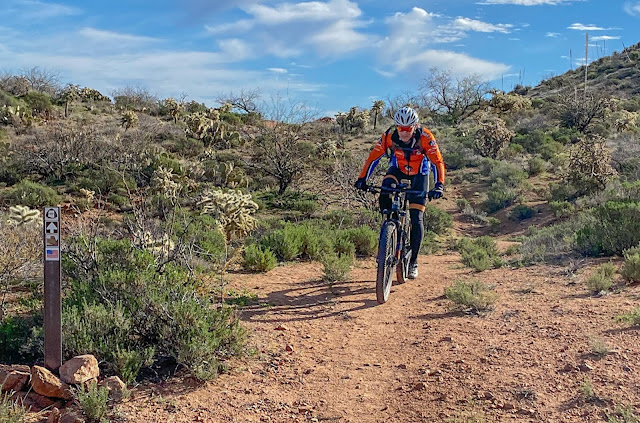 He headed off for the next leg and I drove to the next intersection, while stopping and taking pics along the way. I might have even taken a nap in the van while waiting, but sure enough, Glen rolled in to the Kelvin Bridge trailhead at about the anticipated time. 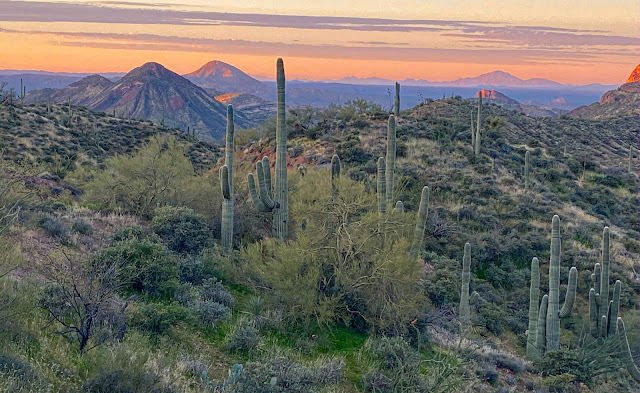 At that point, he was 9hrs into the ride, and decided to pull the plug. Nine hours in the saddle, 50+ miles, and more than 6K ft of climbing was more than I would have done for sure. Maybe he (we) will attempt this again in the future. 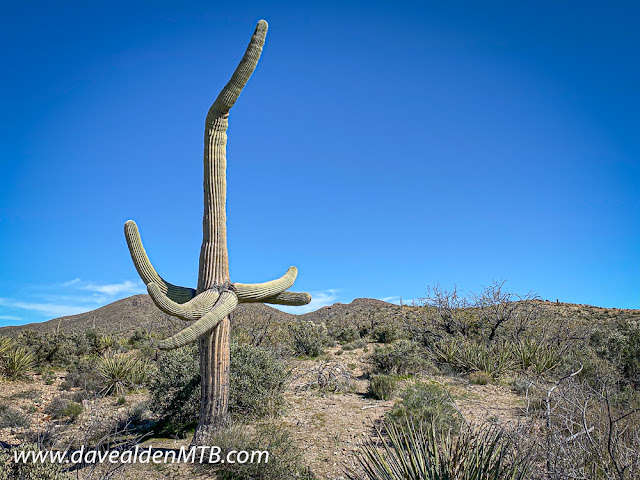 With some daylight still available, we headed back to McDowell Mountain Park so I could bang a quick ride out before packing up to head home. I wanted to grab some “sweet footie” with my GoPro too, so this was very important. Yeah, this was another day of more than 5hrs of driving, but everything was so far in Arizona! 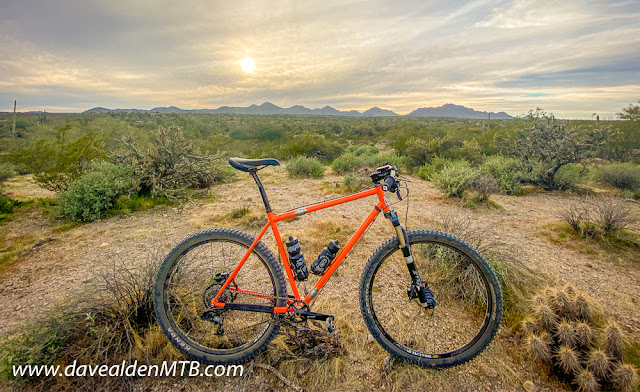 All that was left was for us to disassemble and pack our respective bikes and prepare for the journey home. I was lucky enough to switch to an earlier flight while Glen was stuck on his red-eye.

I posted some pics here.

I’m doing some major housecleaning in iMovie, so stay tuned for my video to drop soon! But for now, it's back to work and back to dreaming about the next trip… 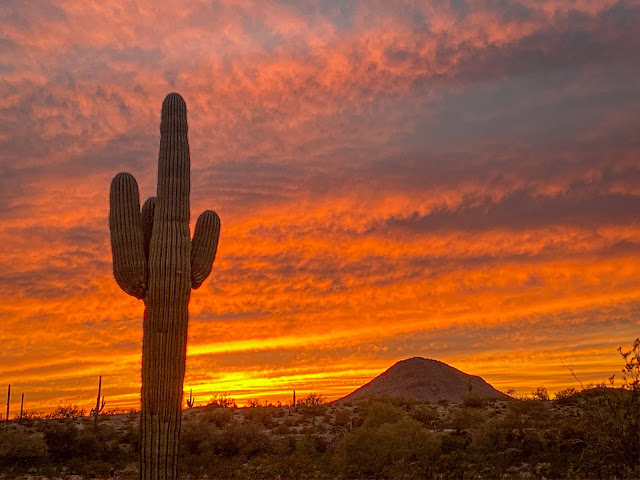