Giving Back Never Felt So Good 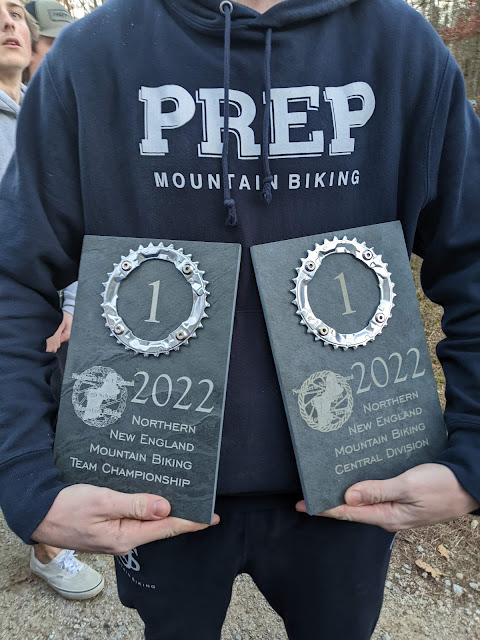 First...a little background. Sometime around the Spring of 2018, I was finishing a ride at Willowdale State Forest when something very peculiar caught my eye. Pulling up along the Ipswich River were two white buses and trailers loaded with mountain bikes both emblazoned with the name of an institution that had given me my best academic years. St. John's Prep. Naturally, I had to investigate further so I got talking to one of the coaches Vin Miserandino. Turns out one of the Prep students who was already an accomplished individual racer, Jackson Heath, wanted to start a team for the school. With the aid of his father, Parker Heath, also an accomplished rider and racer, the school's first-ever mountain bike program was born. After our discussion, I knew immediately that I wanted to join this party.
Maybe a week or so later, I joined the team for their weekly training ride at Willowdale. All I kept thinking was how fast these kids were and how hard I worked to keep up with them. But I loved every minute of it, especially when the kids were chatting about Prep life along with all the changes the campus has seen since my time back in 1990. A few times I sounded like that "back in my day" kind of guy sharing my own Prep stories.
Somewhere in downtown Lynn, I connected with Parker for some burgers and beer to discuss a potential future with the team. It just so happened that due to its success, the Prep was discussing the idea of a middle school development program to groom racers even earlier and they were looking for someone to launch it. The timing couldn't have been any better! I sealed the deal and shook hands with Jameson Pelkey, the Prep's new Athletic Director, and left the campus feeling like I was now part of something much bigger than myself.
Let me speed things up here and get to the point of the article...I launched the Middle School Program in the fall of 2019 with a really fun and energetic group of kids. We worked on fitness, which was also a huge benefit for me, practiced skills, simulated race scenarios, and occasionally enjoyed an episode of Friday Fails. By all accounts, the program was a hit and remains intact to this present day. Then that virus crossed the pond and we all know what came next.
It wasn't long before the Spring season was scrapped and the team would not be racing. To make matters worse, my job in healthcare took a very unexpected turn and forced me to step away from the team for the foreseeable future. I was angry and sad at the same time not knowing if I would have another chance to coach again.
Spring of 2022, I was back in the saddle volunteering my time with the middle and high schoolers. I was brought back on as a full-time coach this Fall working primarily with our high school team of over thirty racers! Coupled with the middle school team, we now needed three buses and three trailers to attend races. Our mission: to repeat as Northern New England Champs. 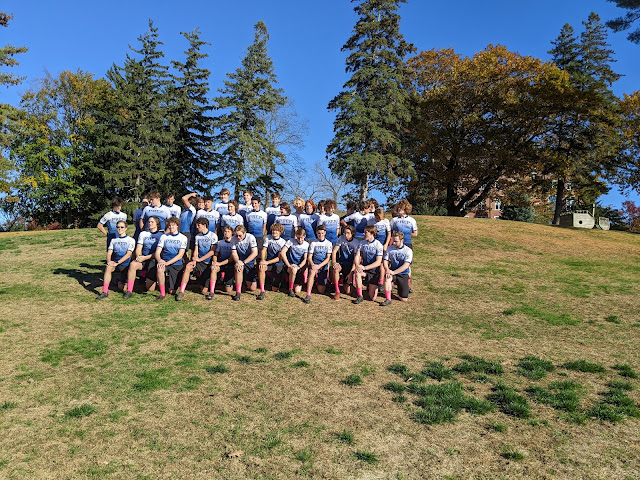 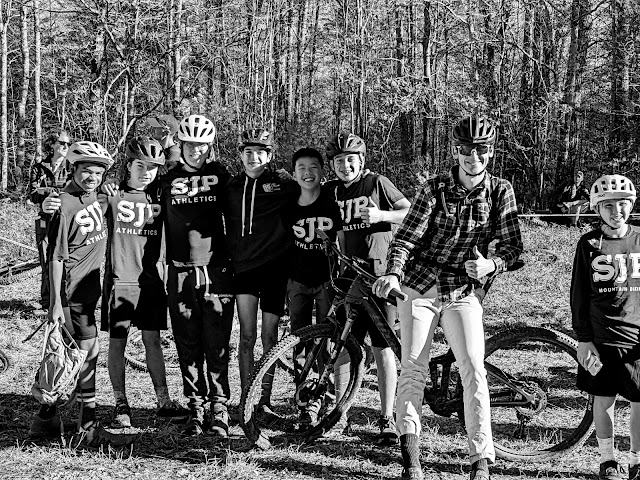 Coach Jackson Heath and his Middle School Team
All in all, it was a short season, but we hit the ground running...or riding I should say. Mondays were tempo days; Tuesdays were skills simulation, Wednesdays were hill repeats, Thursdays lower key with race starts, and Fridays were our Willowdale ride. The team worked incredibly hard to push their fitness boundaries as we knocked off win after win in the division races. By season's end, we were poised to do well in the Northern New England Championships in North Conway New Hampshire.
We had our final team meeting and photo shoot, seen above, the Friday before race day. Each coach had something distinctly different to say to the team to get them ready. Coach Heath (Father) spoke of race day logistics and reminded the team of all the hard work they'd put in since September. Coach Heath (Son) took the team through the race lap by lap and emphasized race techniques and the mental requirements needed. Coach Miserandino used the pneumonic W.I.N. (What's Important Now) to guide the team on the importance of preparation and sacrifice. All I could offer was simple..." before you go to bed tonight and as you wake up in the morning truly envision yourselves winning this race and cordially remind everyone out there watching why we are the defending New England champs."
As you saw at the beginning of the article, St. John's Prep did in fact win the Central Division and Team Championships for Northern New England. It was a grueling race with adverse conditions and tons of climbing, but those kids took the win holding off the competition by a narrow margin. I couldn't have been more proud. I still get choked up by the numerous thank you's from the parents and racers. It truly means the world. 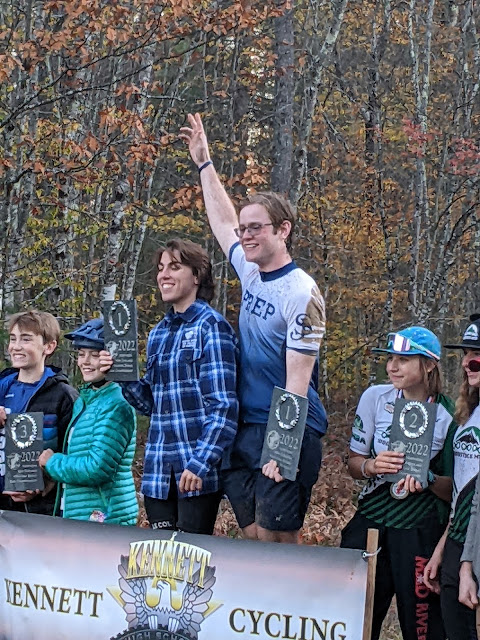 And this is why giving back feels so good. See the easy thing to do is just get on your bike and go ride trails, and if that's all you want or can do that's perfectly fine. Perhaps you live a busy life in that being a weekend warrior is your only option, but if you have the opportunity to give back in any way then I say yes.
Just look at a few members of our Racer-X community. Our fearless leader Dave Alden-St. Pierre not only continues with his journalistic and photographic offerings but remains an active member of the City of Beverly's trail maintenance and development committee, working towards connecting numerous networks so that all citizens can get out there and enjoy the outdoors.
Fellow Racer-X'er One N Glen Gollrad is also a major contributor to the sport. Much like myself, Glen coached a local school program called the Chainbreakers for several seasons. We have Glen to thank for the tireless hours he puts into maintaining and creating new trails in the Northshore, most notably Willowdale West and Boxford State Forest.
I, myself, have picked up a rake and leafblower. I've spent time with NEMBA repairing and building new trails. I plan on coaching for as long as the program with have me and I will continue to write these long-winded articles because...giving back does in fact feel good. 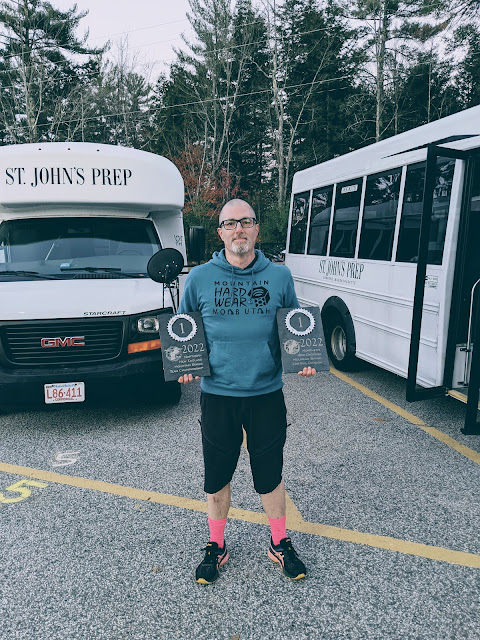 So girls and boys...get out there and enjoy mountain biking, but don't forget to give back to the sport that gives us so much. Make a contribution and leave a mark in some way because there is someone out there who will benefit and might even thank you for it.  Until next time my fellow Racer-X'ers...
Keep It Classy and Keep It Real,
Jason (J-Bone) Fitzgerald

Posted by Jason Fitzgerald at 9:42 AM