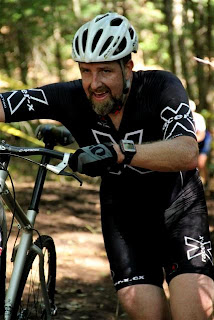 Well, it's been nearly a week, and I'm sure you're anxious to hear about my first 'cross race of the year. To be honest, I was waiting for someone else to write about my race, as it seems, if you're truly an important person, other people write about you.

But alas, no one from Cyclocross magazine has called to get any quotes, so I guess it's up to me.

My goal was to have fun, and I nailed it. A full summer of training to have fun has paid off, and I'm hoping to carry this fun fitness all through this year's cross season. Because, really, isn't all about the fun? 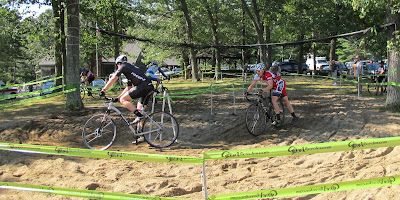 Course? Super-fun. Grassy flats, a short sand-pit (why can't anyone ride through sand?), a long dirt road downhill with a quick jug-handle that actually kept you going straight, at the bottom of the hill was a hairpin turn followed by a great singletrack section which included a VERY bunny-hoppable (word?) barrier at the bottom of a short steep hill. Some more quick turns before being out of the woods and it was time for another downhill. At the bottom of this downhill was a short rise that I swear I wanted to launch off of. Just flying down the hill and hitting the approach of the little embankment fired every memory fiber in my mind of jumping and riding skateparks. The sharp 90-degree turn immediately following the little up section made me grab some brake instead. Another grassy flat section, a quick double barrier, a tight set of "S" turns (off camber) and next thing ya know, you're heading off for another lap. I really liked the layout! 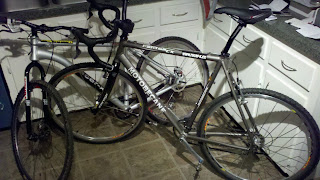 Bikes? The A-bike felt great until I flatted on the last lap. I was able to hit the pit and swap bikes, and my B-bike brought me home. Being able to swap bikes in mid race confirmed my decision to run flat bars instead of drops. By the next race, both bikes will be flat bar equipped. My A-bike is actually a 29'er MTB frame (Access… fancy, huh?) with a rigid steel fork (Kona), set up with a 1x9 gearing and disc specific 'cross wheels (5mm rear hub spacing difference be damned). 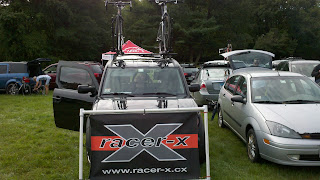 Community? Great to see many familiar faces from 'cross seasons past. There was even a Jamie White sighting, but this is unconfirmed and may have been a mid-race delusion. I did, however, run into a buddy from PA school that was at his first 'cross race--small world! I car-pooled with Jason Matulewicz, chatted with Dave McCrimmon and was otherwise gregarious as usual.

All in all, I was feeling good, and must have been "in the mix." As mentioned, I flatted on the last lap and had to run (lurch?) the great singletrack section until I could get to the pit, I was passed by probably 10 riders (what, no courtesy?) yet rolled across the finish line in 21st place. Mayhap I could have seen a top 10 finish? Like the fish that got away, I'll never know, but I'll be giving it a go at Suckerbrook, and this time with a little more psi in the rear (that's what she said). 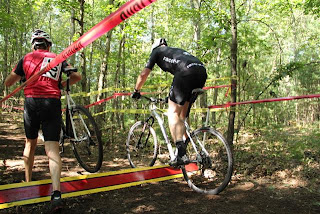 Thanks for some of the pics! http://www.velophotosbyjoe.com/
Posted by David Alden at 7:38 AM