Earlier this fall, when November Bicycles introduced its new HOT BUNS cyclocross frame, instead of wasting tons of money on glossy ads, trade shows, and sponsoring a pro squad (though maybe they’d consider a non-pro squad with complimentary black and white kits...) - they turned to something better: social networking. To encourage the spreading of the message for ‘free’ (saves them money / keeps prices low) - they came up with a nifty sweepstakes. It’s like a raffle - except instead of paying money for an entry - one simply Tweets, posts to Facebook, or otherwise spreads the word to gain entry.

With the sweepstakes, the company is giving away a HOT BUNS Original Recipe Build complete bike to one lucky winner – or at least that’s what they hope to do. Each entry in the sweepstakes increases the value of the prize by $1. At 42 entries, the winner would be eligible for a set of November’s 43g DoubleSecretUltraLight titanium skewers. At 485 entries, a $485 FSW 23 alloy wheelset are in play. Once the entry tally hits 745, the winner takes home a HOT BUNS frameset, which sells for $745. If they reach 2345 entries, someone will get a brand new HOT BUNS Original Recipe Build complete bike (a $2345 value). It’d look great adorned with Racer-X stickers - as we’ve got the same high tech ‘color scheme’ that they do.

The structure of the sweeps gives entrants every incentive to tell their friends and teammates, as each new entry increases the value of the grand prize. After entering, contestants are given some ready-made links to share the sweepstakes on Facebook, Twitter and by email.

To date (December 14 at time of typing this) the tally is over 1100. That means at the very least, the winner gets a set of RFSC 85mm carbon clinchers, or any prize of a lesser value that he or she wants, including the HOT BUNS frameset. If it were myself I’d have to get a set of the 50mm RFSW Carbon tubular’s. 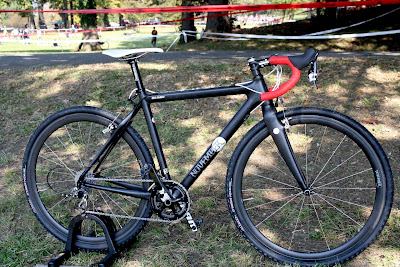