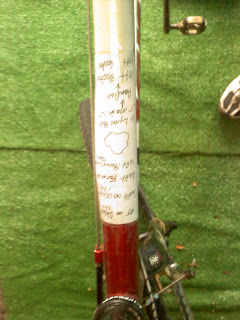 It ain't Garmin but it'll get me there and back.
Tape and paper:  8 cents.
Not having to be associated with anything Jonathan Vaughters related: priceless.

The spring classics are upon us so it's time to once again strike out for adventure!  I put out the all points bulletin for adventure seeking riders hoping I would get a couple hardcore guys.  When rain and snow rolled in I figured it would narrow the field further.  Sadly, the Nookinator was working (boooooo!), Glen is struggling with his road biker/mountain biker split personality illness,  2N Glenn doesn't like to get his bike dirty, and evidently DASP has been having some injury issues.  So as the temps hung around 40 degrees and the sky was drizzling it became a solo operation.


After waiting for ten minutes to make sure nobody was coming I headed out of Salem on some slick roads.  Since I was on my own I switched over from the road bike to the 'cross adventure bike so I could do some fire road exploration along with maybe checking out a trail or two.  The plan was to head over to Great Woods, take the fire road around the reservation, cut up and over to Braveheart, do some climbing, go down and over and back up to Lynn Woods, complete the outer loop, and head back to Salem. 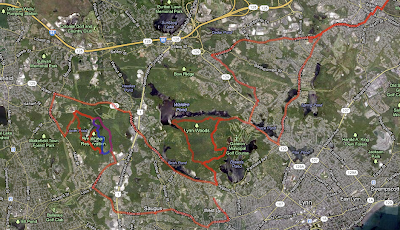 Due to the adventure status of this ride it wasn't exactly like the map since side roads and hills which I see out of the corner of my eye are to me what a shiny penny is to three year olds:  distracting.
That being said, the loop is awesome.   And hard.  There was a fair bit of rain and the roads were wet to varying degrees but the pavement was good and the roads wide for most part.  Traffic was light.
The ride opened at a calm eighteen miles an hour and stayed there all the way to the first dirt section.  The trip through Lynn Woods was harder than I thought it was going to be.  I dropped the hammer immediately on the first climb and was +/- 5% of LTH the entire way.  There are some serious rollers in there I had not counted on. 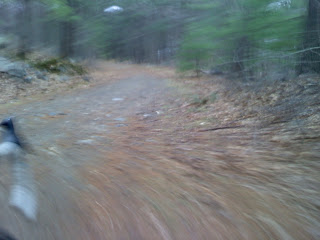 Coming out of the Reservation the roads to Braveheart were nice and wide with a shoulder that could be ridden two across a lot of the way, hint, hint.  The one prolonged climb was fun in the rain but I slipped a wheel on an oilspot heading down over the top and that was a tad bit scary.
I wouldn't take the power line trail all the way again.  Toward the end was basically unrideable on the 'cross bike (unless you're Glen or Renee) and out of the question for a road bike.  The last part was beyond my ability even on a mtb and I ended up walking the last hundred feet down to the path in Braveheart.  Next time I would enter in one of two places.  On a road bike I would just go in at the High School. 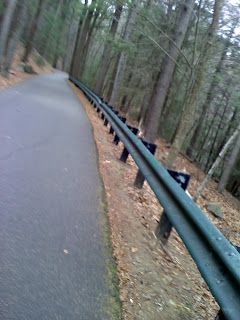 If my plunging descents don't have wet roads and a guardrail I don't feel pro.
(Note the wiggly out of control skid mark headed for the dent in the rail.  Sucker.)

On a cross bike I would go in off Spruce path halfway down the powerline road.  Also, I would start the big loop clockwise.  I started counter clockwise and the immediate descents were tight, wet, and had that slimy green mold on them.  The map really doesn't do it justice.  It was tight and steep and rolling.   It seemed the bigger climbs were hit going clockwise which gives your legs and brain a chance to switch from open road big gears hammering to technical stuff without just diving in.  Literally. 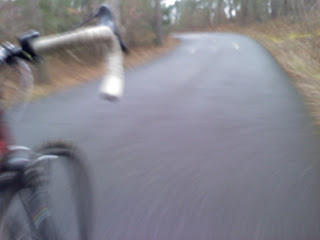 Dave, I found your climbing.

I tried a couple different loops but really want to get back there not in the rain and check it out.  One nice thing about the rain was being able to go apex to apex on the descents since the rain kept other people away.  Also, a fire road off the outer loop looked promising so I want to get back and scout it up.
The road ride back to Lynn was the worst of the rain and some tiny hail but the roads were in good shape so no worries.  I eventually hooked up with the route I used to take commuting to and from work in Boston so that was really cool.  Ahhhh, memories of having a job . . . 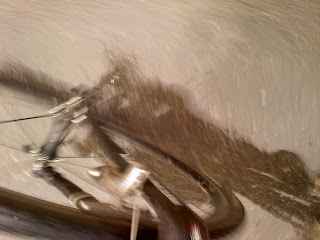 The rain got heavy a couple of times.


Finishing the loop in Lynn Woods on Dungeon Road was stiff as it's mostly a climb.  I ran a 34x26 just for the purpose of getting up that loose rocky climb and it worked despite my weary legs which were feeling as though they had been getting punched for a day and a half.  On a road bike I would instead retrace my steps coming in and avoid this climb. 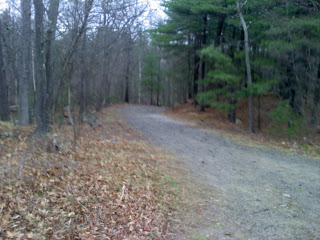 That was about it by way of adventure.  Looped home the longer way and was pretty knackered from the climbing, the bone jarring, and the cold wetness.  Luckily some Immortal Technique came on the pod three miles out and got me home.  All in all, a great day out.  A fan of the Belgian classics I love riding in the rain so the wet wasn't an issue.  Off-roading on a road bike is also my true love born of railing the dirt roads in New Mexico.
Let's all get together and do it again.  As much fun as it was, it would have been even better with some peeps to hit the headwind now and again!