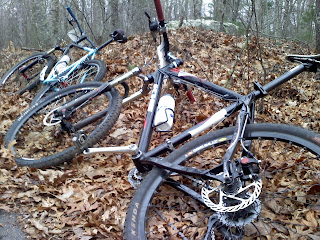 These days I choose my mtb races by watching their helmet cam videos on-line and if it appears I won't kill myself I put it on my to-do list.  Burlingame looked good and it was a time trial so I reasoned I wouldn't be holding too many people up with my constant dismounts and running.  All good until . . .
I have Sirius/XM radio in the car and frankly I don't understand how everyone doesn't.  I have my usual presets I roll thru at the start of every road trip:  Hair Nation (80's metal), Backspin (80's rap), Outlaw Country,  ESPN, etc.  I usually get stuck on one or the other for most of the trip after my initial hunting and pecking around.  This trip down to Charlestown, Rhode Island, I settled on Shade 45, a station supposedly under the musical auspices of Eminem.  The thing is I didn't stay there because the music was good, I stayed there because the music was pathetic.  Call me a grumpy old timer if you will, but autotune + talking does not = rap music.  Don't get me wrong, rap music is in essence talking over a musical background.  I get that.  I get why some don't consider it music.  The sad thing is I would have to agree if this is what now passes off as modern rap.
As someone who has slapped hands with Chuck D, bobbed and nodded to Nas live in NYC, and been confused by my closeted enjoyment of Snow I feel I can make certain judgments.  I judge modern rap as bad.   Just about every song assured there was a party up in there but the more I listened, the more I doubted this assertion.  It seemed as though a more appropriate refrain would have been "There's an overly indulgent producer up in here y'all!"  What happened to the days of Black Steel in the Hour of Chaos with its shrill feedback loops over punch in the face lyrics?
The other thing I noticed was all the 'collaborations'.  Stop already.  Please, just stop.  You can't, and won't, recreate NWA for a one-off single.  The other problem with these get-togethers is they keep inviting Nas.  I understand you want a big name on board but you're trying to showcase your skills.  Why would you bring in someone way beyond your skill level, in essence making you sound bad?   Anyhoooooooo,  maybe some day the desire to create club mixes instead of rap will end.  As Eric B & Rakim made clear:
... we don't have a band, it's just my voice and his hands
That's what hip-hop was, it still standsThe records we use are from mom's and pop's collectionFind a break from a dope selection.
I switched to Hair Nation around the time I got to Providence and then it was smooth musical sailing all the way to the race and home. 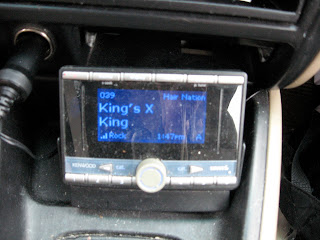 An X-er listening to King by King's X on the way home from The King of Burlingame !?!?! Seriously?!
I was in a good mood for the race and got out on the course to ride the first couple miles before my start.  It was cold but I opted for the bibs and shortsleeve jersey because I'm super-hardcore like that and I wasn't effin' around.  I questioned the decision for about two minutes after the start  as I about froze to death.  But then the fever I had developed over night kicked back in and it was all good.   I got some good riding in then dismounted for an extended run down a rocky hill much to the amusement of the photographer at the bottom.  He had been there when I warmed up and we had discussed at length the best line for me.  A little more riding and then it opened up into a big gear throwdown on smooth trail up and over some hills with chattery roots thrown in.  I had purposefully left the 42tooth off to make sure I was turning easy gears this early in the season but I really could have used that 42.     Maybe 15 minutes into the ride my handles bars slipped and then just came completely loose.  I was forced to stop racing and just started looking for someone who may have a 4mm.  It took me a mile or so until I was directed to someone who might have one.  He did, but not on him.  It was back at his truck so we rode back the way I came and up a hill while I held the faceplate on with my hand so I wouldn't lose any screws.  Big Thanks to the guy who helped me.  I don't remember his name but it was short like Tom or Peter.  So, thanks short named guy!  I got fixed up and rode back to my point of exit from the race which now became my point of reentry. 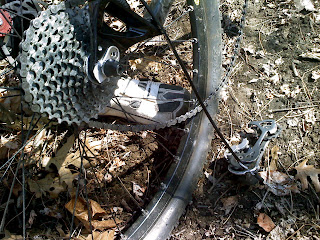 My only other mtb ride this year.  We'll call it mixed results.

So back to racing it was.  Fifteen or so minutes lost but whatever!  I've been doing some super secret training* this winter/spring with minimal bike time and I was happy my legs felt good as I was a little concerned I had been fooling myself into thinking I was in shape.  Working my way through the back markers and some of the guys I already passed was steady progress.   I was dying for the road section because I could see a group of four in front of me I was closing down.  I executed a sweet flying dismount at the road's edge, took a couple huge strides to the yellow line, nailed a flying remount and hit the biggest gear I had.  Mmmmmmmmmm, road.  That was four more behind me and a couple more in view.  I was running out of room to make back anymore time but did a good job riding the bridges which was a skill set I'd worked on, so all smiles.    The finish line kind of came out of nowhere at the top of a climb and I was pretty bummed the race was over.  I think that's good though.  I've put so little time in on the bike I was sad to get off at the end still feeling fresh.
The people who put on the event were super cool and though I didn't have it on my schedule I'll go back for their race in May.  Maybe some Xers will be in tow?
*Does anyone else have a problem typing words that end with 'n' or 'in' followed by 'ing' ?  For some reason my brain will type traing instead of training, explaing instead of explaining.  Is it a coordination issue?
Posted by jamie at 2:23 PM