France:  So my girlfriend Julia had some work stuff in Nice, France back in September.  Rumor has it that the Tour de France and Paris-Nice roll through there, and allegedly, there are great beaches there, so I thought maybe I should tag along.  We ate awesome food and hung out on some really fantastic beaches but about that bike stuff…

I had rented a bike from this company we-rent-bikes.com (because I figured they would have bikes) for two days when Julia was doing most of her work stuff.  I had two great rides planned with huge climbs right outside of Nice.  Unfortunately, my first ride day also happened to be the only crappy weather day we had and I got rained out.  So on the second (first?) day of riding, I chose to do the ride with the famous climbs, the Col d’Eze (rhymes with ‘fez’) and the Col de la Madone.  The Col d’Eze is very frequently used in Paris-Nice and will be in the Tour de France this coming year.  The climb starts in a random Nice neighborhood and ascends to the village of Eze. 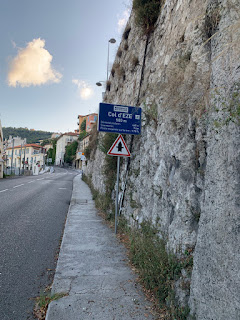 It has also frequently been used as a professional time trial or as a ‘mountain top’ finish.  The start of the climb is only about 1-2mi from the Mediterranean, but it is a 1650ft climb.  It’s not overly steep and relative to the big climbs in the area not too long but there was a very cool “wow, I’ve seen this on TV before” factor.  The ride then headed west, parallel to the coast.  It travels along the hills above Monaco which was really a cool thing to see.

The amount of money in Monaco is indescribable.  I got to hang there for an afternoon later in the week, it was a neat experience.  Then came a long descent into Menton, which is the last large town in France prior to hitting Italy.  From downtown Menton, you take a turn inland and hit the Col de la Madone.  So the Col isn’t used in any races but it was made famous by a certain Texan, 7 Time Tour de France winner who liked Epo and blood transfusions.  It was his big training climb and it was how he gauged his fitness prior to the TdF.  It’s a 6mi, 2300ft 7% average grade climb.  In the first 5 minutes or so, I hear a rider come up behind me and I think “wow this guy is moving.”  Turns out it was a pro from the Astana team and he was flying, passed me like I was standing still.  Never figured out who it was, but he had the full team kit and team issue bike.  About half way up, I see a guy descending, and he was wearing the Italian Championship jersey, turn out it was this guy:

He was moving at about 30mph and talking on a cell phone, I guess you can do that when you ride 12,000mi a year.  Climb took me about 48 minutes.  It was absolutely beautiful, it really was what road cycling should be.  It’s a mountain pass, so it’s a narrow road but there are very few cars on it (maybe 7-8 the whole climb).  Ran into some Americans at the top who had just done the Ironman 70.3 World Championships (they were in Nice the prior weekend).

Did the descent and rode back to Nice with them.  On the descent, I got stung by a bee, glad I didn't crash but ended up looking like this: 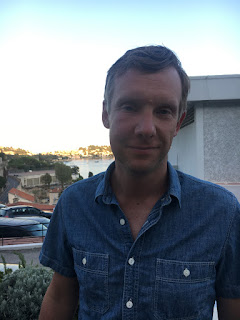 Since I missed riding the day prior, I added some mileage on at the end. 61.6 miles in all, check the ride here:

Kingdom Challenge:  So the plan was to do CircumBurke but that went and got cancelled.  I had already put in for the time off and Glen was still planning on going so of course we signed up for the 100k ride.  We met up at KT the day before and got some riding in.  For those of you who didn’t get up there in the second half of the summer, they’ve made an awesome trail that connects the main portion of the trails with the new Moose Haven trails called Flower Brook.  I’ve got to say, the KT team really nailed this trail.  It’s got some flow, some tech, and some small climbs, all much better than taking the road over to Moose Haven.  We got about 20mi in and then hit the Tiki Bar and Public House 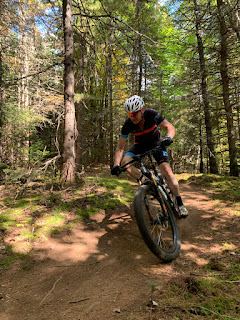 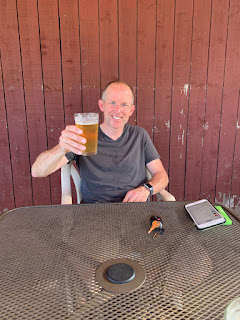 We got up early to go start the Kingdom Challenge which was an awesome event.  They had a spread of donuts (yum) and their headquarters/start of the ride is right in the cluster of buildings on Darling Hill, right across from the bike shop.  Glen and I set out on our own, hoping to stay ahead of the ‘fast group.’ (with some cheating, we did!).  The ride was an awesome tour of Kingdom, it hits every major area and just about all of the marquee trails.  I won’t bore you with the exact route but it started at Heaven’s Bench, hit most of the trails on the ‘town side’ of Darling hill (Beat Bog, Pines, Kitchel).  We missed about 1mi of trail here, because GPS is stupid, that is how we cheated.  Went through town, and hit some trail neither of us had been on before.  Right behind the Kingdom center/Public House/Tiki bar is a trail that takes off out of the parking lot, and ultimately makes it’s way up Burke Mountain to the bottom of J-Bar.  Big climb, but awesome reward.  We made our way over to Moose Alley and from there to Flower Brook.  One lap on Brown Bear and we got a rest stop.  They had plenty of drinks, candy, maple syrup shots, etc.  Next was a dirt road transfer back to the main section of Kingdom, did Good n’ You, Skydive, and a roundabout way to Ware’s Davis.  That put us to East Darling Hill Rd and up the hill to Harp and Coronary Bypass.  Last rest stop and then down to Troll Stroll, Tody’s Tour and Cat Box Hill.  Down to the southern portion of Darling Hill, got all the good stuff except Sidewinder.  Crossed the road and took a meandering route back to the top of Heaven’s Bench for 100k…Unless you are Glen and your GPS had it short.  So I went to the bike shop with the bar and had a beer while Glen went and added on mileage, because he is insane:-P  Kingdom Adventures had brick oven pizzas, beer and snacks on the top of Heaven’s Bench afterwards APRES PIC.  All in all an awesome day!