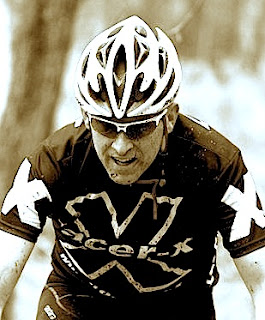 Or more importantly - where's my fork seal? Oh - it's gone! That's why the fork is bottomed out and the race is about to start. Uh-oh. Here's my story:

Setting: Massively jammed start area staging / promoter doing final countdown to our Single Speed race group...
Glen: "DAVE!!! Can I use your other bike to race on?" (nice that Dave rolls in style with multiple steeds)

Dave: "Sure - it's locked to the roof rack, and the keys are hidden. And the seat will have to come down."

This is the conversation I had, just seconds prior to the 2011 Weeping Willow race start. With my pathetic, oil-soaked and bottomed out front end, I sprinted the 1/4 mile or so up to the parking area - then over to the car - while the rest of the SS start wave took off, on course. I found the keys to the car / rack, and quickly tried to unlock the Thule upright rack to free my 'plan B race machine'. Insert Thule key into Thule lock and - nothing. Try again. And again. Step down and look through the keys again. Yup - one of them clearly says Thule on it - so I try it again. And again.

Aha! One of them looks sort of like a Thule key - and it works. How I got the towering bike off the 17'-0" tall roof without breaking anything I do not know. My adrenaline soaked common sense was left back at the starting line... but we're in business now so I lower the seat from it's stratospheric heights (Dave is tall, and apparently made almost entirely of legs. I swear his seat sits at my chest-height!) and hop on and clip in and start racing back to the race.

I race back up to the car and my oil soaked bike to retrieve the number plate which I'll need installed on Dave's bike to (re)join the race. Got that - and oh yeah - those water bottles too (!!!), and blast off. 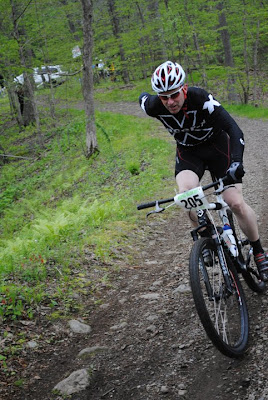 Dave's ultra-swanky XL Gary Fisher SuperFly Carbon is one sweet ride - aside from the fact its about a foot longer than I'm used to. Unfortunately it's gearing is a bit shorter than I'd have liked - so there I was, spinning 150 rpm's up the rolling gravel road to try and catch the back-end of the SS field. Ooof. His fork, however - was functioning perfect; thankfully it's a carbon rigid fork that helped get that enormously long front end up and over obstacles was light as all get out, so I was quickly adapting to the 'cockpit'. Thankfully, Dave's bike seemed to work!

Did I mention the brakes on Dave's bikes are all moto-style - i.e. reversed? And they are (gasp!) mechanically actuated disk calipers which felt clunky and under-powered on such a stylish bike. Thank god they weren't too grabby, as I'd have killed myself on the first technical section of trail. As it was, I was not riding all that smooth - but as I fought and flew this Boeing 747 of a bike up the trail, I saw the back of the field ahead! Hey - it's another Racer-X'er at that, Mr. "Two 'N' Glenn" struggling with his vintage little-wheeled steel framed single speed concoction. I said "Hey Glenn - what's up?!?" as I pedaled by, and he shook his head and muttered something about gearing. He had mentioned running a 42t X 16t or some such insanity a few weeks ago - so I wondered if the punchy technical trails were a bit much for such studly gearing.

In a short bit I could see the crew ahead - spread out along the sinewy singletrack. Folks were really cool, allowing me to pass without much hassle and always friendly. I missed having my bike - if only for the handlebar mounted bell, which as hokey as it sounds I now am addicted to. Just ahead I saw another Racer-X'er, Mike! Woohoo - now I knew I was making headway, but still wondered how far ahead Dave was. Mike gave me the mid-pack analysis and noted that we were in a cluster of mid-pack hammers, but there was a gap and a group up ahead. As I had not seen Dave, I assumed he was up the trail having an awesome day.

Well sh*t! I've got to re-double efforts and chase him down, I thought to myself. In a ride Mike, Dave, and I did a few weeks ago - Mike and Dave were pushing a good pace, so I thought Dave must really be laying it all out on the line and somewhere up ahead, vowing now to catch up to him, or collapse trying.

About mid-way through the first lap I heard the familiar cowbells of the Gollrad / Doyle clan and got excited; the weather was nice enough that my wife and little guy were out on course cheering and bell-ringing! That lit up the turbo-charger in me and put a smile on my face - just in time to hit a gnarly steep little kick of a climb. I peeled off my arm warmers and tossed them to her and hollered in joy, heading back into the deep dark woods.

As I cleared the merry mid-pack gang, I started hearing the messy, clanky sound of shifting gears behind me once out on a mid-course stretch of dirt road. Sure enough, two geared experts came by me and shazam! I doubled my pedaling cadence and got in their slip-stream. Beggars can't be choosers... They were a pair of Bike Barn team mates, and fast. I held on for about 2 minutes, then as we approached the next stretch of singletrack, I backed off a bit to save some energy for the rest of the race. Damn, spinning that silly high gear hurts more than low-rpm climbing.

The race progresses, and here and there I find a few more SS'ers out there and make my way by them - and a few more expert racers come by me as well, thankfully NOT passing me right before climbs at any point. One guy came around me on another fast / flat section and I stuck his wheel for a while, then again eased off prior to the singletrack climbing. Good thing, as he bogged down but got to the side just in time for me to motor past - and then I heard him behind me for a good long while. I'd open the gap up on climbs and technical sections, and he'd come back on easier terrain - but stayed back, just behind me. When we hit the next dirt road section, he came around and was complimentary - as was I, thanking him for not getting in front of me and then popping.

The rest of the race was relatively uneventful - aside from an odd encounter with a small tree, two other racers, and myself performing a trick we used to call a 'CandyBar'. Laughs ensued, and off we went. I was cracking towards the end, and just about crashed into a guy on the last descent who was man-handling his bike with a flat front tire down some sketchy terrain. The last odd item of note was this weird guy who appeared to be some sort of flight-controller type at the approach to a slick, rooty, rocky section that made a right turn onto a wood ladder bridge. He was jumping around like a crackhead on the F train Delancy Street Subway platform in 1986 - yelling something about "stay right" and pointing at the trail like a cartoon clock animation - hands spinning and gesticulating wildly. 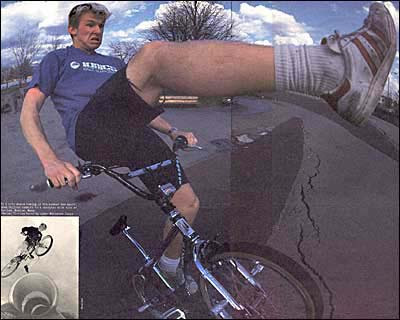 I went around the line, to the left - I've ridden a few dozen times - and proceeded on with the business of racing. Such an energetic young man... Later, at the after-party, Maggie (Andy Nook's wife and on-course racer-X pro photographer) noted that the guy was all bent out of shape, and said to her:

"huh - I guess he didn't want to listen to my advice..."
(or something like that) to which Maggie replied:

"I guess he didn't need your advice".
Boo-Ya! Take that junior.
The end was just a few minutes away, so I kept pedaling and such to the end - but geez, my legs were tapped after only 2 laps out there. I think that over-adrenalized start really whacked me out and now, 48 hours later my quads still hurt. I never did catch Dave, and went back to the cars to find him. Huh. He wasn't up there either. Mechanical or wrong turn on course? Or what? I get changed and rinsed, thank my honey and little guy for being out there, and we wander around looking for the crew. We find them - and Mike explains that no, Dave was right with him (er - behind him) most of the whole race, and I just must have missed him?!? Seems impossible, but then again I was a bleary eyed snot-bearded nut that first lap and not all-together "there". But to miss Mr. 6'-4" tall Dave is almost unimaginable, but so it goes.

Maybe it was all the after-party beer and standing around too - though more likely my lack of real training and fitness so far in 2011 - but this race cooked me. Time to re-boot the season, as I've been slacking since the Tour of Battenkill and gained a lot of weight (somehow...). I'll edit this report with some race photo's as they become available. Next up? Fun rides in VT this weekend! And some TT practice too...

Near the end (photo by Maggie Garcia-Nook): 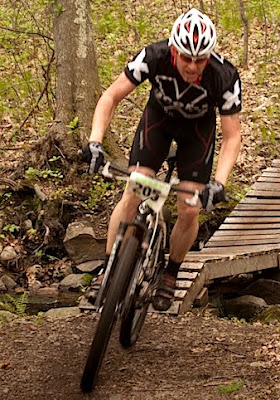