Jamie and I had a fun ride last week - where instead waiting for "everyone" sipping on sports drinks, nibbling on treats, and sucking on CamelBack hoses while chit-chatting every 10 feet, checking our various GPS receivers and such - we drilled it for a lap. The wrong way. From the wrong side. 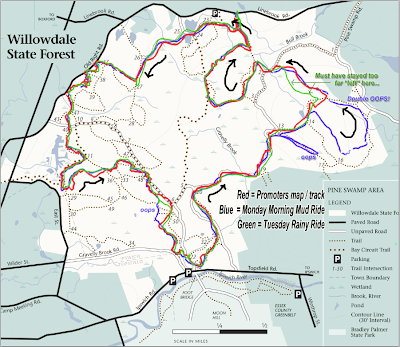 Riding essentially the same route the race took last year was a nice refresher. Of course, I found it totally useless in terms of understanding the course for THIS year - other than generally working on trail riding. I got to think a lot about a lot of things while not sipping on sports drinks nor snacking on energy bars and gels. What was I doing standing around so much?

In the last few days, in the gloomy, misty - at times really rainy - weather, I've embraced the unchangeable and made the best of what we've been given in terms of weather. Tire pressures and tactics on the gloopy terrain play important roles - as does paying very close attention to traction, low hanging branches, and slippery bridges. With a home-made map in hand, one in which I took the promoters gps track, opened it in Google Earth, took a screenshot, opened it in PhotoShop, clipped the course track off the Google Earth screenshot - then dropped it onto the DCR Willowdale Map. 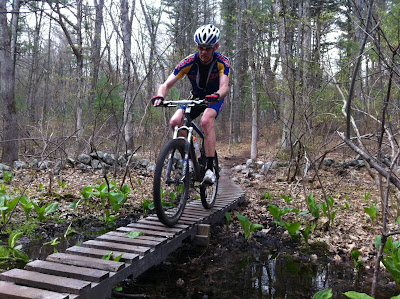 I was tired after all that procrastinating - so the ride on Monday was tough; faster than the wrong-way ride with J-Rock, but still not all that peppy. Lot's of map checks and back-tracking (see map and purple line labeled 'Monday Mud Ride') but fun. And hard. I decided after that to get a dang iPhone App that I could load the promoters track onto, on a background map, load it locally to the phone, and refer to it anywhere out riding without a data / cell connection. I found said App and loaded the route, saved it to the iPhone, and headed out for ride #2 yesterday.

I was tired after all that technical research and such - but felt better anyhow with my new-fangled set-up. And a paper map too, to refer to in case of confusion. I parked, started "tracking" and blasted down the first mile or so of dirt road, right by the first turn. Oops. Back-tracked and found the very obvious right turn onto single track, and was on my way. It felt more natural this time around - so I made good time despite a few minor corrections, but got pretty confused up around marker #14 on the DCR map and on the actual trail.

For some reason it felt way more single-speed friendly this time, and I had the thought that 34 X 18 was not tall enough! Then I remembered I'd be driving from Maine the morning of the race, and then would have to do THREE laps. On a hardtail single-speed bike. And I may have screwed up (read: went the easy way) around the top end of the course / aforementioned Marker #14. We'll see race-day. I'm focusing on exploring that side of the course this evening, if anyone is interested - and will be nicely warmed up pre-riding the front-side 3/4's of the course anyhow. If anyone has insight into what's up with the course by Marker #14 - do tell. There are a number of factors at play; my map, the DCR map, my GPS receiver, the promoters GPS receiver, and so on - but I bet we stay north of the ridge after climbing up onto and over it - not just south as I rode it yesterday. On Monday I rode WAY around this "backside" north end ridge, but need to find the middle-ground.

Or not. During the race everything will work out and feel totally different anyhow, right?
Posted by Glen Gollrad at 11:26 AM