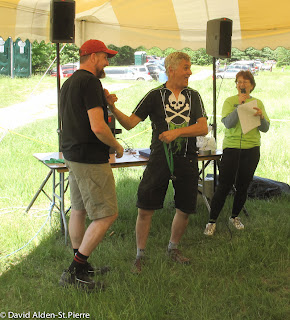 I'm going to share a little secret with you; I'm tall. No, I'm not freakishly tall, like an albino Manute Bol, but I think I fall into the "above average" height category. Every bike I've owned has been XL, and my legs go all the way down to the ground. It's not very often when I have to look UP at someone. At 6'2", even if someone is a bit taller, up to 6'4" say, it's only my eyes that have to gaze up a bit (such as when I gaze in Jamie's beautiful eyes). So when I have to actually look up, with my head, it's a weird, weird feeling.

This is what happened when I lined up for the Clydesdale race at the Big Ring Rumpus. I was amongst giants. One rider, a recent expatriate from Down Under (who's name I forget), was riding a custom "Megabike" built by Lennard Zinn who specializes in bikes for tall people. Another rider, at 6'7", was riding a 23" Trek, which is larger than any of my XL bikes (they usually measure 21"). And there were more tall people as well. It was bizarre indeed. 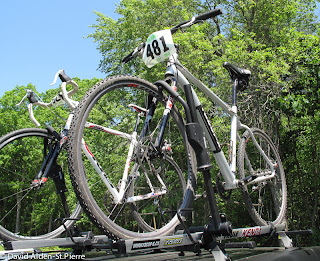 We all lined up for the start, looking down on everyone else, and when we got the "GO," one dude, of average height, took off like a rocket. My suspicions that this would not be a successful attack were tipped off by the full-face helmet. Anyway, a few of us caught up and passed the rabbit and fell into a paceline. Pacelines and mountain biking don't usually go together, but this course was FLAT, non-technical, and FAST; essentially a road race on dirt. Hence my 29'er MTB with 'cross tires. I was pulling for about 1/4 or so of the first lap, and I wasn't sure how many riders were right behind me. I asked if someone behind could take a pull so we could get farther ahead, when a shadow passed by me, blocking out the sun.

A guy named Brett, the aforementioned rider on the 23" Trek took his turn on the front, and for the next 15 miles, he and I rotated positions, while we pulled farther ahead of the other riders in our class, and worked our way up through everyone else that had started in front of us.

As the course was entirely non-technical, it was simply a matter of pacing and planning the attack for the last lap. With each lap, I mentally marked where I'd make my break, but when we were on the last loop, Brett attacked first and I was left chasing. At first, I couldn't respond. It was too soon for what I had planned, and at another point I got bogged down by some trail congestion. Brett was out of sight, but slowly, I started gaining ground. I was getting closer and closer, but the finish chicane, a twisty, tight section of taped off grass, was looming ahead. Brett hit the chicane a couple of seconds ahead of me and that was it. He took the win, and I was the first loser. Despite the fact that I was, at most, 5 seconds behind, the official time had me at 47 seconds or so behind, so perhaps time was bent somehow in the chicane.

Anyway, Jamie smoked his class, and I'm sure he'll tell you all about it, but I've also got to give "mad props" (as the kids say) to Terry Cowan for killing it with fastest time.

The race was a total blast. I would have liked SOME technical sections, but overall it was super fun, and great to work with someone for almost the whole race. Throw in some perfect weather, and a well-run event and what more could you ask for? I'll be back next year!
Posted by David Alden at 9:01 AM