The Willows Weren't the Only Ones Weeping 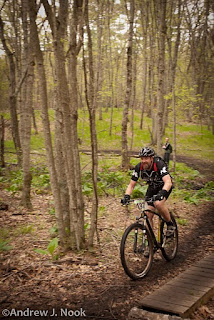 Ah, Weeping Willow. It's hard to resist a race that's nearly in your back yard and on killer trails. That was my mindset when I signed up for the Open Singlespeed class. I had no delusions of fitness, no false ideas of grandeur. But I did apparently misconstrue the word "friend," as someone I thought was a friend left me to die.

I would change the name to protect the innocent, but there was no innocence, just pure malfeasance on the part of Michael F. Lawless.

Mike had been lamenting his lack of training and lack of fitness. I told him that I was in the same, sinking boat, and that he should register and participate, just to be there. This is a big race for our team so it's good for us to show up in numbers. Finally, after much cajoling, he relented and said that he'd enter. He even convinced me to sign him up, that morning, so he could languish in bed and roll up when it was *convenient.* Hmph. 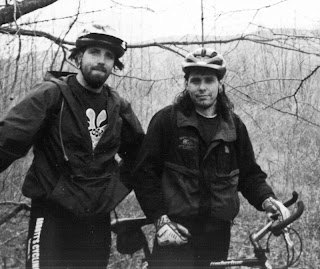 I figured, it would just be a ride, two buddies who have been banging handlebars together for 20yrs. Little did I know that he would be the Brutus to my Cesear.

I'll get back to that in a moment… but first, a big thanks to Riverside Cycles for giving us the green light to put out our team tent--THANKS! It's much appreciated. I wish more race venues would allow for "team parking" areas. I think it would add so much to the atmosphere of the race if Racer-X and ECV and Toro Loco and NEMBA and everyone else could have a tent up, rather than having the riders spread all over… but, I digress. 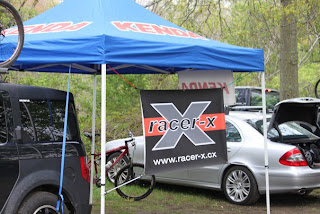 Next, I'm thankful that I have many bikes. I brought two, only raced one, but Glen was able to kick my ass on my other bike. With my own bike mind you! I guess that's two people that stabbed me in the back. Anyway, the Specialized Rockhopper came through for me.

And, thanks to Toro Loco Cycling and Maggie Nook for the pics!

The race started like so many other races, aside from Glen's frantic, last-second bike switch (he tells it better than I can, but barring that incident, I think he could have won). We rolled out for an 8.5 mile loop of some of Willowdale's best trails. It's fun, flowing, and a blast to ride. 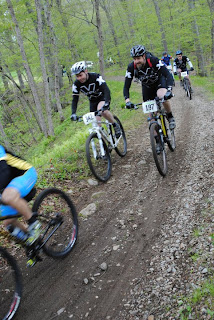 Mike and I rode together, except for when I had to actually stop (yes, I stopped) at the top of a hill, and wait for him. Then there was the time I stopped AGAIN to wait for him while he fixed his back wheel. Why would I stop? Because I thought we were just out riding. Mike had different ideas. The number on the front of his bike turned him into an evil man. How so? When he had the chance, he turned the ride into a race. Sure, it technically was a race, but it didn't have to be. It could have just been a ride. But no. He repaid all the favors I've done for him by riding away from me and taking the coveted 18th place position, leaving me to wallow in 19th.

It wouldn't have been bad if that was all, but then, he very quietly says, "I beat you." 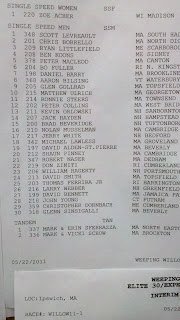 Then, he says: "To find your name on the results, find my name, then your's is below it."

And the final insult, when, as a courteous rider, I sent him a photo of the race results, he says "Yah thats right, you just cut that out and tape it to your visor till the next time. Bitch."

Aside from knowing now that Mike is soul-less and inherently evil, the race was fun. Sure, I was suffering, but I like to suffer, that's why I do these things. Truth be told, I wouldn't have minded a little less suffering though. My second lap was a cramp-fest (which Mike took full advantage of), and it seemed like someone sprayed my front tire down with olive oil because it was sliding all over the place.

Nevertheless, it was a good time, and it was cool to hang out with Glen, GlenN, Andy, Maggie, Mike B., Steve, Ron, Todd, Doug, Tim, Lauren, Leslie, and, I guess Mike L.

Many were able to come over to the new Racer-X headquarters for a cook-out, even Jamie, who was MIA for the race was there! Good fun and I'm looking forward to a fun summer racing season. 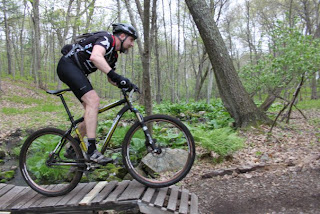