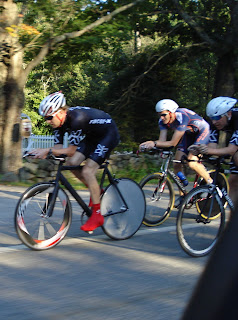 Throwing together a last minute Team Time Trial squad was easy. Finishing intact - not so easy. Jamie and I teamed up with two seasoned time trial friends on the Velo de Mer team - Shawn Gavin and Scott Carrier. These guys make going fast look, well - easy. Jamie and Scott are the very epitome of tall, skinny, ass-kicking cyclists. Shawn is too - just not as tall, but holy christ his engine is the strongest of anyone's I get to ride with. If, that is - you call sucking wheel "riding with"...

With no time to warm up, strategize, or otherwise sort things out - we were off, heading north on Route 1A out of the Hamilton / Wenham high school, in lovely Essex County, MA. Shawn on the front, Scott next, myself, and Jamie anchoring the rear. I felt as though I looked like the odd man out - somehow similar to that of a rat in a boa constrictors body - you know, the big fat lump in the middle of a sleek reptilian body, partially digested but still large. And lumpy..

Anyhow - despite the lack of warm up, heading off the line at just-below redline pace was a good warm up. JUST hard enough without too much pain. The first stretch of road had a nice tailwind - so we blew up the road even while conserving some energy. Shawn dug in for a solid, long, hard pull, then Scott for a more human but plenty fast pull, then me for a micro-pull, then Jamie. I think we had all of 1 rotation prior to making the first turn onto Rte. 133 heading east, on a more open - and now hot - 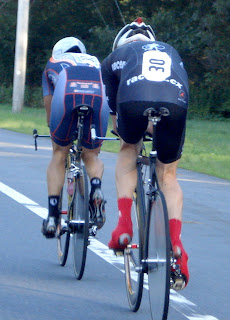 Somewhere in the first minute or two after turning, we came detached on the Rte. 133 section - Jamie fell off the pace line - but Shawn was right there to work with him and get back up onto Scott and I's wheel. It took maybe 60-75 seconds, but like a freight train Shawn came up and around, depositing Jamie on my wheel - and went right to the front and just about blew us all apart with a monster pull, especially after bringing Jamie up the road. Where the hell that power comes from I do not know. We eased back into a rotation, but alas, Jamie was being chased by demons this fine summer evening and had to contend with them - without suffering WITH us, but all on his own. Ouch. I felt my fate may be similar - but vowed to go down swinging. A teams time is marked when the third rider of the team crosses the line - so those guys would have to wait for me, or my time - to see what our result would ultimately be.

A pattern emerged - one where Shawn would pull 50%-60% of the time, then Scott would pull for 20%-30% of the time, and I'd make up the rest in a rather anemic and underpowered way. Nearing the last section of false-f 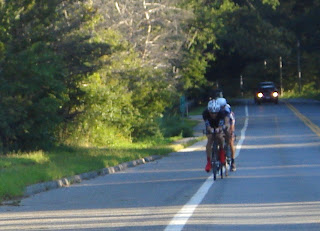 lat climbing rollers, I wisely sat out (1) rotation to save the last bit of gas for one last push over the last climb and down the screaming fast descent to the finish. The three of us blew by the timing squad (thanks gang!) and it was done. Holy shit that hurt. I felt fortunate to have timed the absolute depletion of all energy reserves spot-on, but lamented the fact Jamie was still out there fighting his way in. He seemed fine later, while we were downloading stories and details of our attempt - and he was definitely off; obvious by the fact he was getting ready to ride home... after riding / racing to get to the TT in the first place! Sick. Puppy.


The final TT / TTT marks the end of the great ECV sponsored training series, which means Wednesday evening will now start shifting to cyclocross training / hell. I'm simply not ready to *gulp* practice getting OFF my bike, dammit. Nevermind this serious 'muffin top' physique if one not conducive to the ultimate 45 minute throw-down effort called 'cross racing. 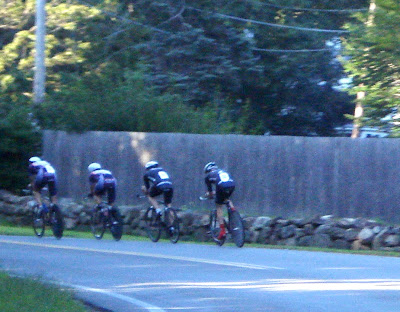