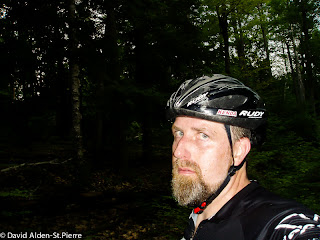 I'm not sure why I thought this 100K MTB race would be a good idea. I don't remember that last time I have put that kind of miles in on the mountain bike (I don't think I've even gone that far on the road bike this year). I guess last year at the Wild Cat Epic 100, and the Vermont 30, but that was a year ago...

And I *think,* if I recall, last year I had done that thing where you ride your bike lots and lots in order to prepare for an event... I think it's called "training." Yeah, training. I didn't really do much of that this year. Oh well, what's the worst that can happen, right?

I pretty much underestimated everything about this event, from the distance from home, to the pain I would endure; I definitely got more than I bargained for. 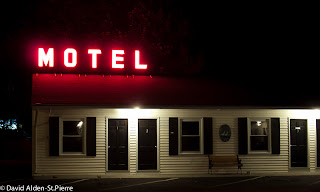 I WAS happy to get my car back, the day before leaving for the race. The rental cars I've had have not been working well for me. It's amazing how accustomed to the Element's features I've become... it truly works so well for a life with dogs and bikes. Anyway, aside from issues that will get sorted out later, the car looks almost new. I do look forward to getting the new AC pump... 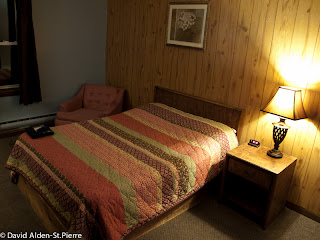 I originally thought the race was only about an hour or so away, but then again, I didn't do ANY research into the race details until Friday. D'oh! Turns out the race was closer to 2 hours away, and with a 6:15am mandatory rider's meeting, I booked a last minute hotel in Milford, NH. The hotel itself was a bit creepy on the outside, and the decor on the inside was... retro... but it was cheap, clean, comfortable, and close. No complaints!

At 5:15am, I was loading my stuff into my car when I realized that I couldn't find the key to the lock that I had used to lock my bike in my car. I took all of my bags out, emptied them in the room--multiple times--when I finally found the key 20 minutes later on the ground. It had actually bounced under the car. WTF? 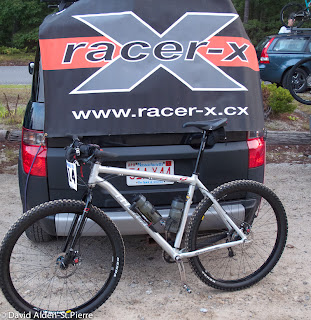 Anyway, with the ability to access my bike secured, I made the drive to the race venue and completed my preparations. Unlike other events like this that I've done, I was planning on relying heavily on the aid stations for fuel, rather than carrying my own. I wanted to be as unencumbered as possible. I even used a seat back strapped to my handlebar (in addition to one on the seat), to carry tools and tubes.

Fellow Racer-X'er Pete-G (no relation to Kenny-G, that I know of), was also in attendance, but I never saw him after the start. Well, until I rolled in at the finish, when it appears that he had time to shower, change, clean his bike, learn a foreign language and perhaps carve a scrimshaw whale tooth. 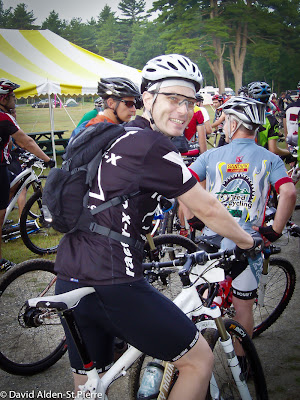 I was staged with the rest of the Clydesdales at the back, along with the SS'ers, the sole tandem duo, and riders doing the 25M course. Towering above us all was the Clydesdale I battled at the Big Ring Rumpus. I was hoping for redemption today, but instead, it was I who was castigated. 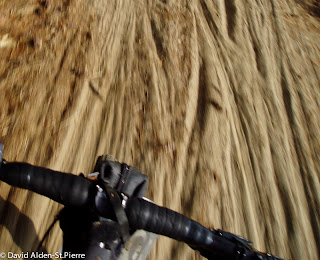 The course starts out fairly flat and fast. Dare I say, fun. We were warned not to push too hard on the first 20 miles because it gets tougher towards the end. I heeded these words (not that it helped), so I mostly cruised and kept my pace below the red zone. We hit paved roads, dirt roads, train tracks, rail crossings and at about the 8 mile mark there was an evil 500ft climb up a power-line trail. And then at about mile 18, we hit this mile or two section of sand. It just sucked the energy out of my legs, but right when I had recovered, at about mile 21, we hit a wall, and went up about 800ft in two miles. 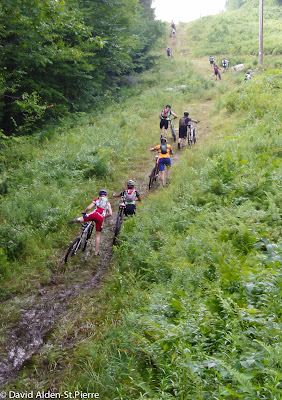 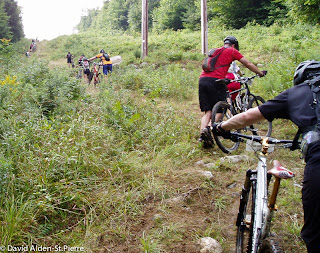 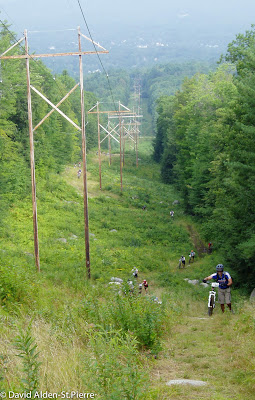 I stopped at the aid station at mile 25, topped of my fluids, and took off. I recall hitting one of the fast downhills after the aid station... I hopped a log but my front wheel landed in a rut. I was going fast and completely off balance... I don't know how I pulled it, but my left leg went out, I pushed off a rock, and essentially fast-planted (see below) to get back on the right trajectory. It was one of the gnarliest "saves" I've ever had. 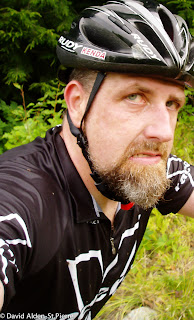 Back on course, I kept moving along and I was feeling pretty decent. I was popping my Endurolytes, taking a GU every hour, and trying to stay hydrated.

But it was hot. And humid. And hot. Normally, the heat and humidity don't bother me too much, but going on about 4-hours in, I was starting to feel it. I can't actually recall EVER sweating as much as I did. I mean, the sweat was literally pouring out of me. It was like I was a sponge and was being squeezed. Seeing how much fluid I was losing, I tried to push the oral liquids, but if I drank too much, I could just feel a belly full of water and sports drink sloshing around. I needed an IV. Part of my mind started to recall rates of gastric emptying, intestinal absorption rates, and I was even thinking about renal physiology, not that any of that would help... 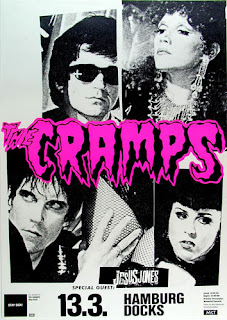 From this point on, the remainder of the race was simply a matter of keeping up with the forward movement. I wouldn't stop, but just kept plodding along. I was really in excruciating pain, but I didn't want to stop. I probably walked AT LEAST 5 miles, but most likely much more. I had no choice. I tried pedaling through the cramps, and sometimes this work, sometimes not. The cramps were my constant companion for the last few hours, and the ONLY way I could get any relief was by cooling myself by dumping cold water on my head. With limited water supplies and the heat, this relief was short lived and had to be repeated as often as possible. 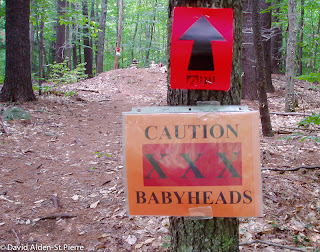 So does that mean I didn't have any fun? Nah, I still enjoyed it. Although the section with the baby-heads was pretty technical, and oddly, fear inspiring. Luckily, I made it through unscathed.

But the cramps were brutal.

And adding to my misery was my choice in bicycle components. I like rigid bikes, and I honestly think the 29'er wheels roll over most obstacles well enough to avoid using suspension. I do have a couple of 29'er forks floating around that I'll use here and there as needed, but overall, I prefer the rigid fork. 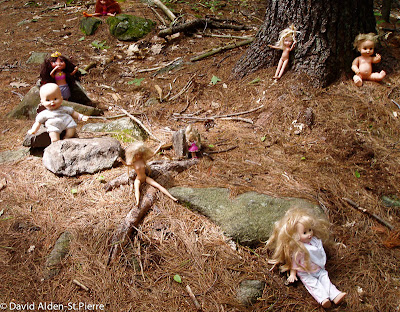 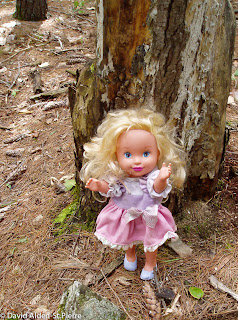 Well, the rigid fork was fine for the first hour, the second hour, and the third hour. I didn't mind it too much on the fourth hour, but as the hours dragged on, and I was struggling, the rigid fork became a bit too abusive. So, in addition to legs of agony, my arms and shoulders were starting to fatigue. I was even getting a headache. Yeah, next time, for an event this long, the bouncy fork goes on.

Some of my "friends" will give me crap for using gears, and it's true, I would rather have ridden SS. But, I'm able to admit that I'm simply not man enough to do so. I got passed by plenty of SS riders and I tried to give "mad props" when I could. If I wasn't wheezing or something. I will say, as a nod to my fellow SS brethren, while my bike did have a 1x9 drivetrain, I swear, I only used one gear at a time.

The last ten miles seemed to take forever, which is a shame, because the last ten miles was comprised of some good singletrack. Trails that under normal circumstances I would have enjoyed, but on this day, every root, rock, mud patch or slight hill was torture. 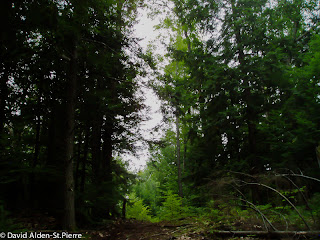 I did get some relief towards the end in the form of a torrential downpour. Seriously, it felt great, helped to quell my cramping (by cooling me down), and I was able to put out some actually effort in the last couple of miles. Which is good, because near the end I got passed by a couple of people, one of which in my class.

After 7+ hours on the bike (my actual time was much longer, because my GPS would stop recording while I was stopped at water stations, etc), I was NOT going to get passed in the last mile. I was able to keep the cramps at bay long enough to pull ahead on a climb, and stay ahead. The cramps came back in a BIG way just before the finish, and I nearly coasted the very last section--which was entirely flat, around a running track, but I kept my position, and, against all odd, came in 3rd in my class. 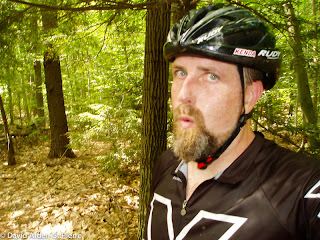 I never was able to get the giant, he came in 2nd, but I'm sure we'll meet again.

Until then, I've been working on repleting my essential nutrients. Yep, I got my bacon cheeseburger on my way home, yep, I've been drinking like fluids are going out of style, and the day AFTER the race, I literally could NOT eat enough salt. I was craving salt like you can't imagine. Everything I ate looked powder coated, but it was all delicious NaCl. Salt, salt, salt. Mmmmm.....

Anyway, to summarize, it was a long race, I had some fun, I sweat more than I believed possible, I had hours of cramps, the rigid fork was a mistake for an event this long, and I had a day of binge salt ingestion. Can't wait for 'cross season!