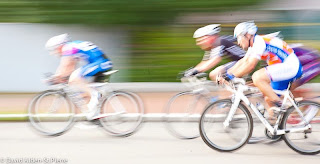 In preparation for the crazy-fast race last night, I worked hard to be as not-ready as is possible. I hadn't ridden much these last 5-6 days, I was up late the night before working on the car (new exhaust manifold & hardware) and had all the requisite kinks and aches from the home-mechanic under/over car gymnastics - and so on. Not making excuses, but interesting to point out that some weeks rock, and some roll....
On to the report. Jamie (the closest thing on the racer-x squad to a roadie-pro) had said not to worry about my decidedly un-pro pre-race regimen, but to follow three key instructions:

ive the first 18 minutes was indeed a large part of the battle. In those first 18 minutes, there were two relatively minor crashes (I could hear the carbon crunching behind me) and I quickly learned how to save a ton of energy by cornering efficiently. This would be key to surviving the next / last 22-24 minutes of this roughly 40 minute crit. With a good start position and decent jockeying near the front half of the pack, I was feeling a bit on the rivet - and took it one lap at a time. The .7 mile loop was a boot-shaped killer - from the start / finish it made a hard right, then left, then right - onto the backside straight-away.

Then after achieving Mach 1, we slammed into a 90 degree right-hander onto the drag-race section complete with pot-holes and rough spots of patching (though in astounding show of municipal 'get 'er done' Beverly got a huge hole paved and completed JUST prior to the race). Sweeping into the 2nd to last turn, speeds topped out again in preparation for this last turn - a moderately sharp right onto the finishing 100 meters on Cabot Street - the lovely downtown Beverly main street. I rode these first 18 minutes hard, to keep up - but as conservatively as possible - not knowing when it get truly ferocious, and having no idea how my legs would hold up. Every acceleration seemed to hurt.

2.) Make sure you move up PRIOR to pack primes.

I guess I did this - though it was hard to tell when they were calling out Primes (say "preems") to this uber-rookie, as Jamie was my real-time coach out on the back-side. Yelling things like "get out of the wind" or "move up - you're too far back" or "stop sucking ass Glen!" (I made that one up). At times, mid-way through the race, I was near the front and always surprised to see the back of the pace car. Last year, racing in the P/1/2/3 field - my view of the car came quickly - as it was on my wheel, honking and urging me off the course within the first 18 minutes! That was decidedly NOT fun. So when I got too close to the front, I'd ease off enough to get some riders ahead of me - then hop on in and ride wheels. No idea when / what laps the primes were on - but at some point a group of 6-8 guys shot off the 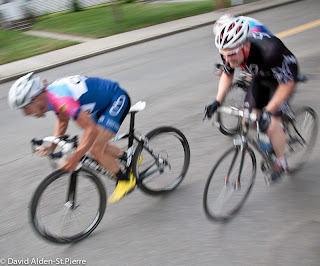 front to contest one, I believe. We caught back up a half a lap later...


3.) Get OTF (off-the-front) once and you'll be a legend to the Racer-X crowd forever.

I assume Jamie had noted this in jest - as there was little chance that I'd actually try it - as i was JUST hanging in there, and opted for the somewhat conservative tactic to simply finish the race with the lead group. I did get my butt in the Salem News article about the race - a shot from the start of the Masters field, and a shot from the kids parade lap, where I rode around with my little guy who got to rock it in the kids events with Tim Johnson.

As the race wound down, the last 8 laps were a flash. With 2-3 laps to go I was too far back, with 1 to go I was placed pretty well, passed a few guys while setting up for that last corner - getting up to 15th or 16th place on that last straight-away, then cornered clean and fast - passing a few guys at the end and grabbing 12th place in the 'bunch (of old guys) sprint'.

Racing in downtown Beverly is great - lot's of spectators, closed roads, and fantastic kids events. Having done it these last two years, I can safely say it will be on the annual calendar as long as I can keep pedaling. Thanks to Paul Boudreau and the whole ECV gang for a great job and some fun times. Thanks also to Racer-X team mates Dave and Jamie for all their cheers and photo's - and my dad for wrangling Victor while I attempted aerobic-based bulimia, er - I mean criterium style racing. 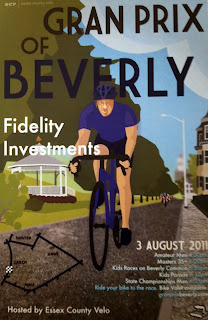