A combination of burnout and injury derailed my 'cross season, to be sure - but this fall I've had some really fun mtbike rides. This past weekend I went out in search of the Bay Circuit Trail to see how far I could get - and how far it went. I switched plans at the last second, as the Southern Branch of the Northern half - that passes through Appleton Farms - has a no-bikes policy. Boo.
I caught a ride to a trail point in Hamilton and headed out. This first stretch of trail was mainly mellow two-track with little technical challenge - but loaded with scenic areas. I gradually worked my way up behind Pingree School and into Bradley Palmer State Park. With so many trails in the park, way-finding the BCT was a little tricky here and there - especially a large open field section - but with a little back-tracking I always regained the route. As I crossed the Ipswich River, I 'knew' where I was going now - as I've ridden Willowdale a ton.

Uh-huh; no WAY would I get off track here, right? Well, I was going the right way but wanted to double check - so I back tracked, made a wrong turn, and headed off to Ipswich. Whoops! Back I went and re-gained my initial, correct track. Once headed north-west in Willowdale, i was on a roll. Popping out on Rte. 1 and heading into some really choice trails, I was officially having fun. Not that I'm biased, as a local - but the Topsfield portions were great! Techy single track, really remote feel 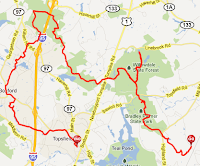 at times, and some nice bridges / structures.

Into Boxford, I felt as though I was making progress on my journey. Likely not able to take the time to get all the way over to Harold Parker - I figured I'd ride until I hit a road crossing that looked familiar, then head back for home. The problem is, it just kept getting more fun! I was impressed at the old bridge over I-95, as it was obviously built with the highway originally - but then never used, as if they intended an interchange but it never came to be. Great! A dedicated non-motorized bridge to keep the flow of the BCT nice. Once west of I-95, the trail takes a hard left back into deep woods in the Georgetown / Rowley State Forest. Again - not the most technical terrain, though at times it was - but always fun to see JUST far enough ahead to the next trail marker kept things engaging.

It got rather kooky in Boxford (no surprise) as it went on-road / off-road a lot. I came across a Boy Scout camp set-up on the trail, in a nice open space - but they blocked the trail entirely (without knowing it). The creepy guy in lycra finally stopped circling the kids and asked if anyone could tell where the trail went, noting it was marked with white dollar-bill sized blazes. One kid spoke up and pointed me in the right direction. Ah! Right past those tents and fire pits. Got it. This little stretch was great - but then the trail popped out on Dana Lane - a swanky residential road / cul-de-sac. Thankfully I had the 'trail description' that said yes, continue through the end of the cul-de-sac, onto what looked like a driveway, the turn into the woods through a hole in a wall (!).

It worked, and sweet 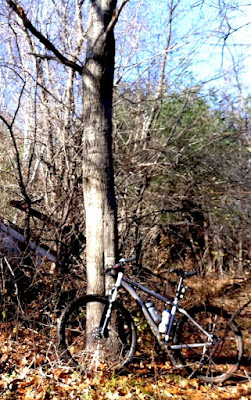 single track was found again. I finaly split from the BCT at Fish Brook - along Lockwood Lane - and headed for home. Next, I'd like to try riding from home here, through Willowdale, through the trail areas I rode last weekend - but forge ahead to Harold Parker, as the ride Dave and I did there last week was GREAT - especially the BCT sections. Ultimately I'd like to ride the whole north shore 'piece' and then start exploring the southern arc next year. Maybe one day, early / mid-summer - try and navigate most all of the route.

Anyone else up for that kind of adventure?
Posted by Glen Gollrad at 1:50 PM