Where is Glen (who cares)? 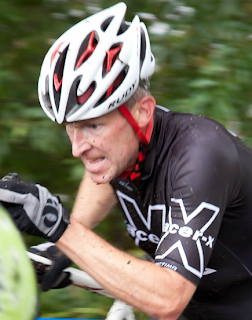 Building off a great 2010 'cross season and a decent summer of riding this year, I planned to conquer the Masters field(s) this season, all over New England. Hell, once dialed I figured on trying to take my A Game to a MABRA race or two and show THEM how I roll. Oh yeah - look the f_ck out! No sooner did I set that ship to sea - ready to conquer and take no prisoners - she started taking on water. Fast.

Race 1: Sucker Brook 'Cross - Auburn, NH; Last year, I was already on good form for this fun race - hell, I was on such good form I raced both the M35+ race and the CAT3 race as well. My plan was to roll up to the 2011 edition and save it all for one race - the M35+ event, and get to know my peers I'd be facing this season. Arrive at the venue with Jamie, time it perfect so as to be able to pre-ride between earlier races and all. We hit a warm up lap and BAM. While crossing a small, non-technical wooden bridge structure with a trace of moisture on it - I washed out and SLAMMED my knee, thigh and shoulder.

Oh great! I mangled my shifter / brake lever too. I hobble and wobble back to the car, stop by registration the way (shameless in my bloody and muddy KHS get-up) and get my bib number. That crash let just about all the wind out of my sails, but I figured "hey, I got the first crash of the season out of the way - that ought to do it for the fall" and went on my merry way. Fixed the bike, changed into my race kit and headed for the start line. Raced the race - felt meh, at best - and was surprised by the very small field. Good: Hopped up / rode the big log off-camber step up every lap, demoralized a lot of less technically capable riders (they told me so!). Bad: Realizing that even without the crash I was not in good shape. At all.

Race(s) 2a and 2b: Midnight Ride of Cross - Lancaster, MA; Feeling a little gimpy still - I wanted to get a race or two in prior to Gloucester, and the mid-week event sounded right. I got to the event just in time to line up with the SingleSpeed gang, on my true SS CX bike (geared bike at the ready for the main event later) - and was shocked and dismayed that most of the bikes were geared set-ups with a zip tie on the shifter lever... this felt like more of a let down than it should have, but it just seemed so dirty, so impure - I did not like it. At all. And said so - noting how lame it was to anyone that'd listen.

Off we go - spinning like fools on the fun straight away to grass they started us on. Seemed like aside from a few freaky fast leaders - I was OK. Holding my own the first two laps in the front 10 or so, I felt the front wheel losing air fast - and before I could register this fact, I rode right by the pit area and 100 feet later was running with the bike. The course did feature a 2-sided pit, but I was on the much, much bigger backside of the lap covering 3/4's of the course before the next pit entrance. Better yet, in my haste to get to the SS start, I left my geared bike bike well away from the actual pit area. After a few hours, it seems - I'm finally huffing and puffing into the pit, at last - and ask the referee if it's ok to leave my bike, with the flat - and run to get my spare. He just gives me a weird look and nods, and off I go. I came back to the pit with the geared bike, pull the front wheel off, install it and hook up the front brake cable hanger wire. Er, I mean try to hook the brake back up.
WTF? In the low-light night race / pit, I could not get the front brake working, so off I went - one brake, one gear, and one lap down. I finish he race and limp back to the car with my deflated motivation - and that other, deflated front wheel - to begin the process of changing a flat in the dark. And registering for the 'real' race. And getting dressed again, and new bib number on. Legs were toast, hands hurt from changing a way too tight tire on that flat - perfect for racing the silly fast Master group in 15 minutes! Not.

Race(s) 3&4: Gran Prix of Gloucester, aka New England Worlds; With both bikes back in action as proper, geared CX race bikes - it was starting to feel like the season was finally going to get underway here. Gloucester is the one race I've done every year since moving back east - and I've had (4) awesome races here - from warm, fast, grassy days tickling a podium spot - to solid top-20 finishes in soul-sucking cold, wind, and rain - this year felt like it was just right. Cool and damp - but not cold and wet.

Well, what can I say... my body was not happy, my A-Game was pulling another no-show, and flats, mechanicals, and a face-plant in the sand on day 2 conspired to put a real damper on the racing fun. If it weren't for the stellar, unflappable cheering section out there - I'd have bagged day 2 for sure, grabbing a DNF and departing with my tail between my legs.

I did get some excellent pit-area bike-swap practice on Day 1 - thanks Jamie! Bike and Body just did not 'work right'. Best moment by far was seeing Dana and Victor on course, cheering away - just for me. Highlights (lowlights?) included:

On day 1 I did out-sprint some dude at the very last second, on the line to hold onto glorious 26th place. 5 more feet and he would have had me - but this day - I GOT HIM!!!

Races 5&6: Providence Festival of Cyclocross, Providence, R.I.; You know what? To hell with this race - and this report. That's how it felt / how I feel about 'cross this year. 'They' (the Providence promoter / course designers) added some more contrived douchey-sections and that's just how it felt. I felt like crap, the courses were not inspiring, and I just couldn't find my groove. To boot, on a ridiculous off-camber high speed chicane to gravel, I just about lost it - 6 Million Dollar Man landing style

- but suffered only a majorly strained right thumb, that still hurts.

After that insanely hot, frustrating weekend of racing - I all but retired for the season, taking many weeks off here to eat, work, and heal. I'm finally posting up as the only thing that has felt worse than doing so poorly, and feeling so lame - was not posting up here to share the joy. After a stellar day out on the mountainbike, with Dave - once again I feel like I like cycling more than not, and suppose I'll continue to ride... I think I'm done racing 'cross this year, at least until my knee, shoulder, and thumb feel solid again. We NEED Wednesday night Worlds again, starting the first week of August; sand, hills, sprints, etc...

Next year, I will re-read this post and remember to start actually training sometime prior to lining up for a race. And to run more, a lot more. And to be more positive, a better husband, and generally a swell guy and not the cranky asshole I feel like this fall. My feet are cold, and I need a beer, so I'll see you all later.