What a day. My head was clogged with snot, I had a horrible night's sleep, but, because I love 'cross, and I love racing, I made the drive out to Sterling for day 2 of the Baystate Cyclocross race weekend (I worked on Saturday).

You can re-live the race along with me with the following video, but before you watch, I need to say a few things. First, the aforementioned snot was working against me, and, well, you'll hear an excessive amount of throat clearing. I sound like a pig grunting. I suggest you turn the volume down. Next, as I'll discuss in a little more depth below, I was racing in a pair of slip-on sneakers and borrowed platform pedals. My mental checklist gave me an epic fail, and I drove all the way to the race without my cycling shoes. And finally, as you will see, it was a bit damp during the race, and by the end of it, the camera lens was wet and fogged up. Not the best pictures, but, you, the viewer, get what you pay for.

How the day unfolded... 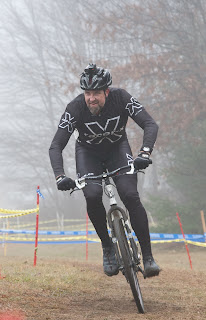 As mentioned, I've been feeling a bit crappy over the past couple of days. Sinus pressure, sore throat, and just generally "blah." But, I sucked down some DayQuil & coffeets and despite only getting a few hours of sleep, I was still motivated to race.

The dogs were a little confused as to why there was so much activity at 5am, but I also plucked my wife out of the warm bed. I threw some tea her way and said we're leaving in 30 minutes. When I went out to load the car, I was a bit surprised to see how thick the fog was, and how cold it was. Wasn't it fairly mild the day before?

Anyway, we made the drive and Jay Curry drafted me the whole way. He did warn me that my bike was in danger of falling off the roof rack, but otherwise, he was able to conserve precious energy... energy he used to beat me in the race, but I'm getting ahead of myself.

Once at the venue, I signed in, got my number, and started readying my gear... helmet, jersey, shorts, arm & leg warmers, shoes.... shoes... shit. I forgot my shoes.

With the countdown to the race start getting close to zero, I made a desperate plea for the impossible--"anyone out there have an extra pair of cycling shoes with Egg Beater cleats, size 46?" 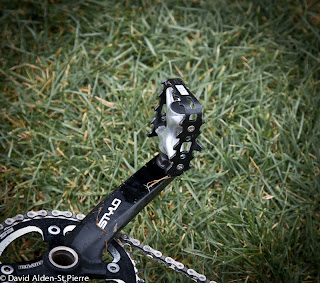 I did the next best thing... I borrowed a pair of platform pedals from Shimano's neutral support. No cages/straps, and with a pair of flimsy slip on sneakers, I lined up at the start, ready to do battle.

Anyway, somehow I snagged a front row start and when the gun went off, I was only a two riders behind the leader... the leader who happened to be team-mate, Rob Bousquet! Rob was killing it! He and I were 1&4, then 1&3 respectively for a while, but all good things must come to an end. Rob had some problems with tubeless tire eructaion and ultimately had to pull out. My bike worked well, and aside from the fact that I felt like I was going to pop off my pedals any time the trail got rough, all was good. You never really realize what a great "connection" you have on your bike with clipless pedals, until you have to ride without them. Fortunately, I've got many years of BMX background, but it was still super sketchy.  Turns and off-camber sections were tricky too as I was hitting the pedals on the ground quite a bit.

Aside from that, it was an easy race... essentially non-technical. One rider did however go down on one of the wet downhill sections, and from what people were describing, sounds like he earned a pretty impressive ankle fracture dislocation. Whoever you are, I hope you recover quickly!

I held on for 20th out of 54 starters (I think), which, all things considered, isnt' too bad. I still haven't trained AT ALL this season, so it seems to be working for me as my results seem to be a little better than they were last year. Pass the Dogfishhead please. 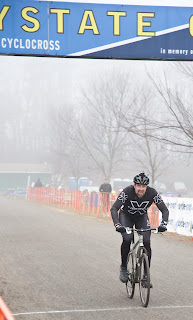 All in all, it was a fun day. I'm looking forward to the Ice Weasels!

By the way... check back to this site. Jean took about 200 pics, so I need to go through them and they WILL be posted soon.
Posted by David Alden at 4:58 PM