Zwift - Zwifting my ass off this winter 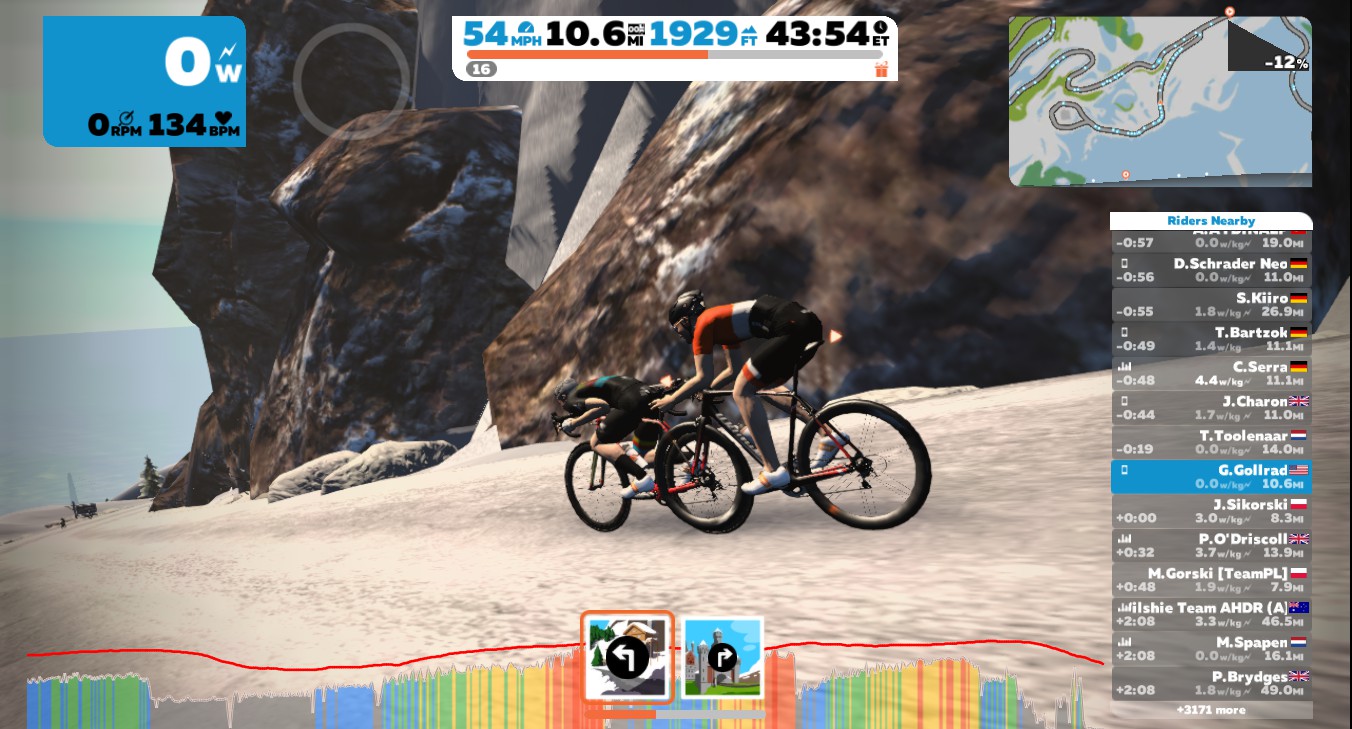 Think ‘Connected Exercise’ is (or is NOT) for you?


Interactive eSports are exploding, interconnecting athletes from around the world in instant, virtual environments. "WTF are ‘eSports’ anyhow” you may be thinking… I’ll not explain the topic broadly, but by the time you finish reading this - you’ll understand it from my personal point of view. There are a number of platforms and philosophies out there, and the one I was interested in doing a deep dive on was Zwift. Six months ago I had never heard of it. Four months ago friend and teammate Glenn S. was posting rides from exotic places like London and Richmond, VA. Other Strava friends were posting similar virtual rides posting legitimate mileage, elevation, and hours in the saddle. Reviewing the various program modes within Zwift, it made sense; unstructured riding in their virtual world(s), structured training rides, group rides with or without structure, and most challenging - actual racing. Others include TrainerRoad, Rouvy, BKool, Sufferfest, etc... 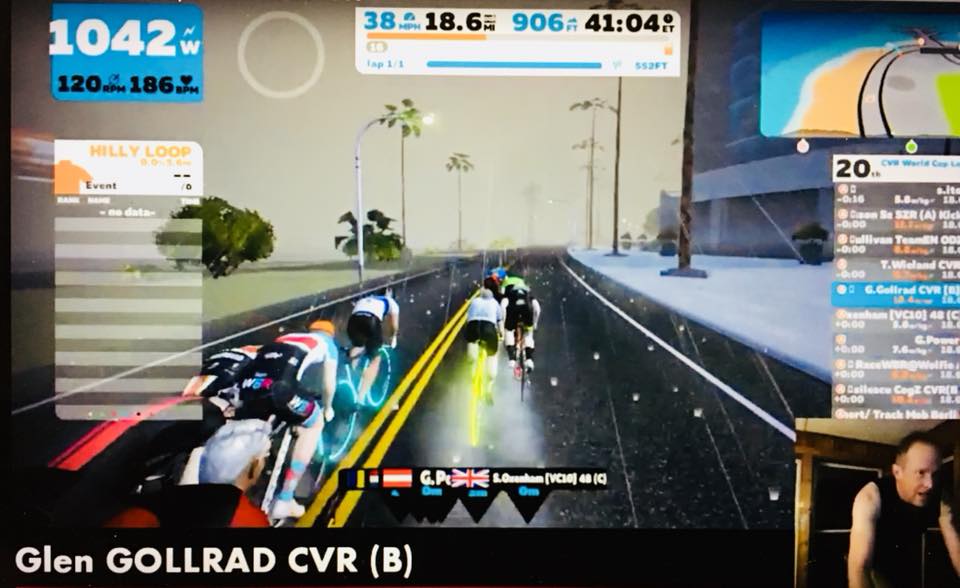 YouTubing some basics, I got the fundamentals of what it was about and knew that with my BlueTooth LE (BLE) mobile device, an on-bike BLE power meter that captured cadence, speed, and wattage (the latter being most critical), a nice set of rollers (Inside Ride e-Motion), and a good WiFi connection I had the basic tools to try out some virtual riding. Bonus (and cruel honesty check) is a BLE enable household scale that updates my rider profile with real time weight data, which is helpful for platforms like Zwift that calculate your “Power to Weight Ratio”, which I’ll get into below (more on ‘weight doping’ later). Zwift can run in many modes, with many options; direct from an iOS device - nothing else needed, direct from a BLE enabled laptop (MacBook Pro, i.e.) on a laptop or desktop PC with a mobile device acting as the “connection” via Mobile Link app from you and your bike, to the computer (or Apple TV as well). The faster the video card and the faster the internet connection, the sharper and smoother the virtual world gets. I have run it equally successfully on a really low-end PC laptop, a wicked fast gaming laptop (while live streaming a screen capture and my real-life suffering), a MacBook Pro, and right from my iPhone - plugged into a TV via HDMI adapter. 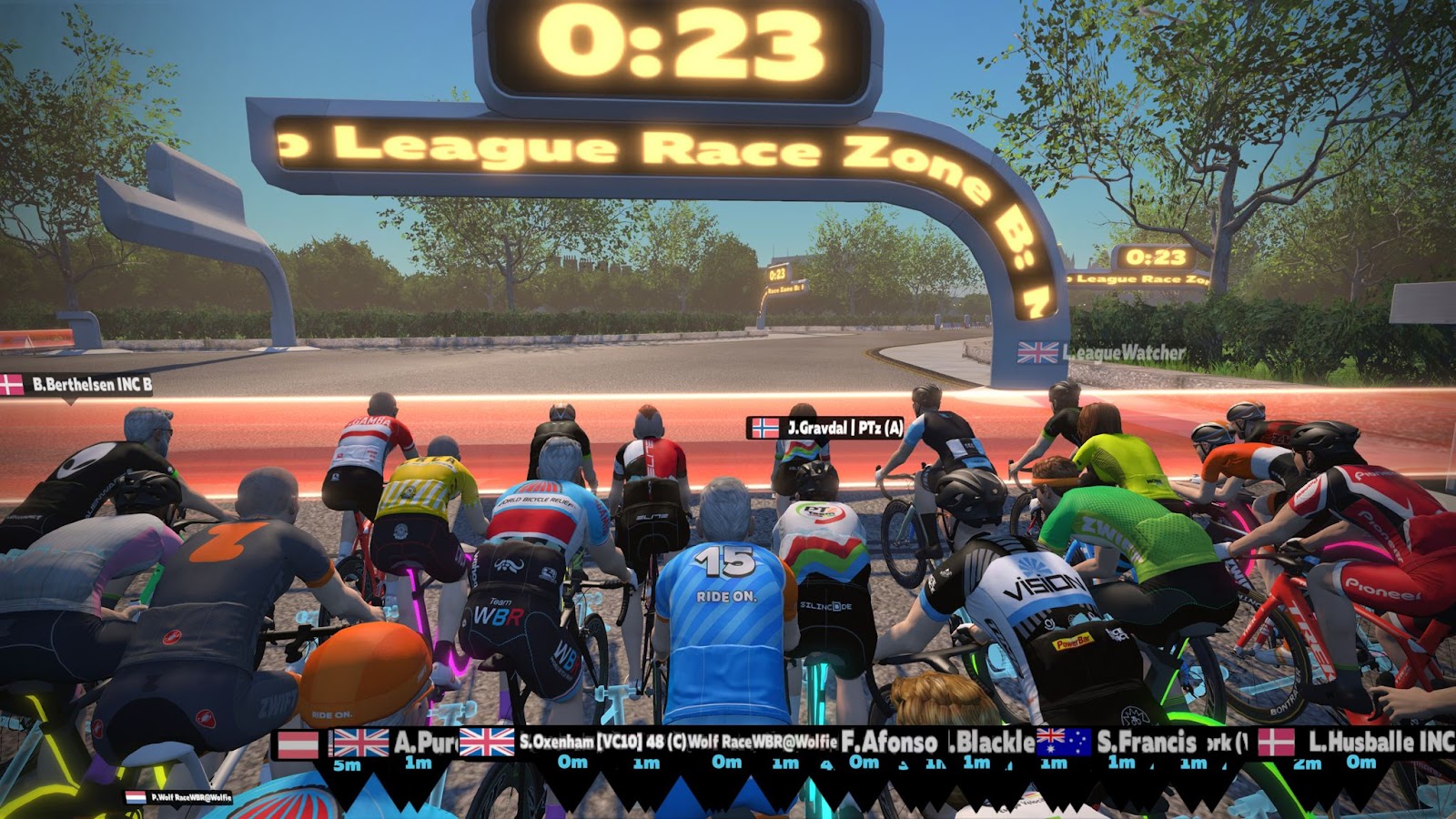 Power
Power is the key - and needs to be communicated to the virtual environment platform. Three basic categories for power are generally described here:

·        Interpolated (Estimates power) - Software interprets speed sensor data Zwift calls this zPower. This is an estimate using the speed and cadence sensors (tons out there) and an Ant+ dongle, or BLE and a trainer (rollers or stationary) and algorithms within the software to estimate Watts.
·        Power Meter (Actual power) - As the description implies, a component on your bike measuring power in Watts, through any number of systems. There are crank, crank arm, spindle, wheel, and pedal based systems out there that span a large cost range. I use this system; a rollers, a bike with a PowerTap BLE hub, and an iPhone to collect and transmit the data to a laptop.
·        Smart Trainer (Actual power + smart resistance) - Perhaps the ultimate in virtual training, smart trainers not only measure power, but automatically adjust resistance based on the terrain in the virtual world. Climbing Alp d’Huez? You will feel it! There are trainers that ‘vibrate’ to simulate rough road, as well as systems that you can connect your fork to that raise and lower the front of the bike to simulate positive and negative pitch. I’ll not attempt to describe all the systems out there – as folks like DC Rainmaker and others have done it very well, and I do not currently have one. Look for my upcoming article about an attempted ‘hack’ at my Inside Ride eMotion Rollers, where I’ll attempt to retrofit their sweet new Smart Resistance Unit - a specially modified Elite QUBO unit that bolts onto the new rollers (but not the older models) right out of the box.

Power data plus your weight data is the great equalizer in virtual riding (as it is in real world riding too, but less important in a group ride or race). This metric is referred to as your “Power to Weight” ratio – measured in Watts per Kilogram (w/kg). Relaying that info in real-time to the virtual environment allows folks of wildly varying body types and weights and capabilities to ride together in groups – or to keep them honest in races. Jargon aside, this w/kg number is what Zwift uses within the virtual environment to set your speed relative to their courses, and relative to all the other riders on the platform. When you get set up, log in, and begin riding – you’ll see yourself and other nearby Zwifters in a list – displaying their name, their w/kg real-time info, and the type of data collection interface they’re using. If you pedal along at 2w/kg then other folks pedaling at 2w/kg are going about the same speed as you are. If they’re cranking out 200 watts but weight 100kg they’ll be travelling at the same speed as someone pushing out 100 watts that weighs 50kg. Power to Weight. Understand it, own it. There are subtle variations, like when drafting, climbing, or descending – and even some difference in equipment selection (again, more later). But basically, it will feel / seem pretty intuitive within a few minutes once you are underway. 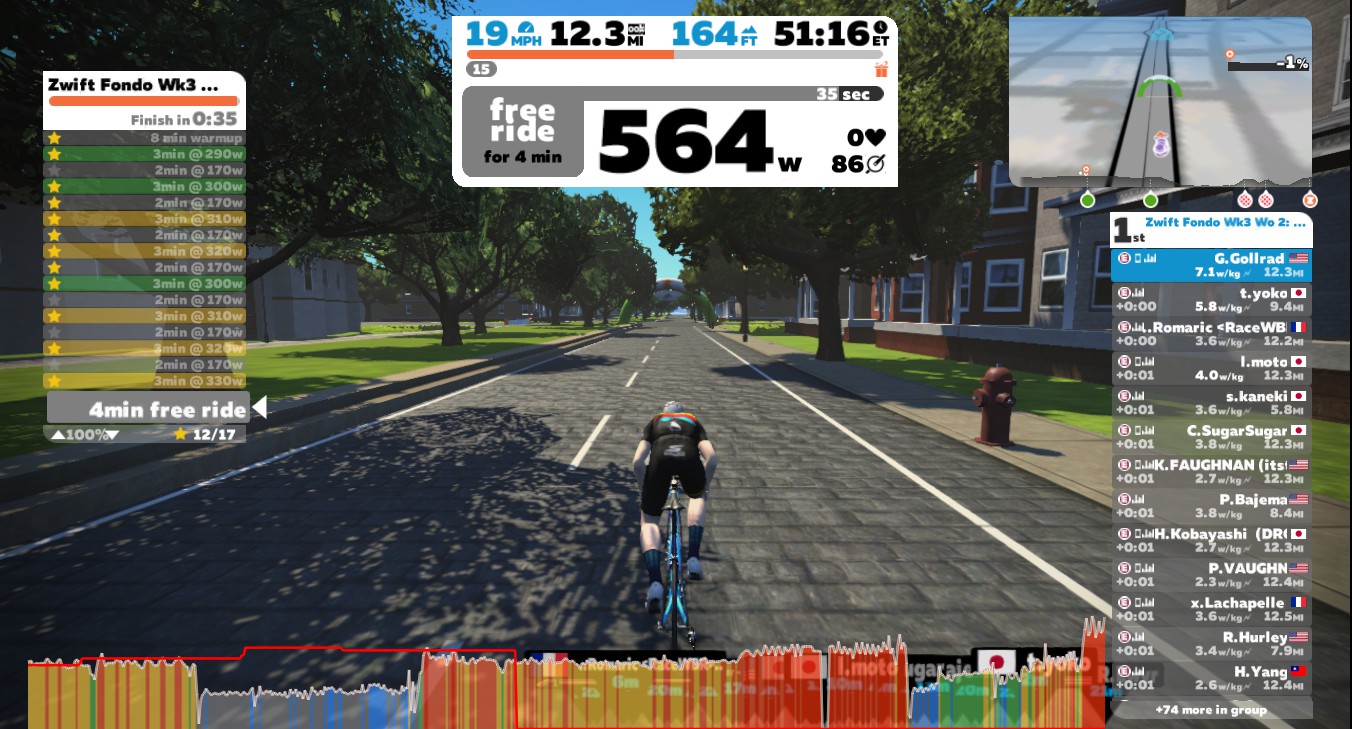 So - knowing all that, let’s get back to that “weight doping” I mentioned. WTF is weight doping? Simple, really - if the key to the races and rides in Zwift is POWER, then the more more Watts per Kilogram you produce, the ‘faster’ you go on the virtual courses. Putting out 240w and weighing 120 kg’s = 2w/kg or a fairly conversational pace for most. Putting out 240w and weighing in at 60 kg’s = a power to weight ratio of 4w/kg - or a solid expert level effort and moving quite quickly on the virtual terrain. Take a relatively big guy like me at 80kg - 82kg (180 lbs) with an FTP of about 340w, you can see how the weight becomes a significant variable. If I get down to 68 kg’s - I’d be pushing an FTP to weight ratio of 5w / kg - or seriously freakin’ fast (like CAT1/2 Road / Pro mountainbiker). So you can see that raw wattage is a nearly useless number; it’s the functional threshold power divided by weight in kilograms. That wattage number means absolutely ZERO when not coupled with weight.

Simply put the higher your FTP in w/kg number is = the faster you go in real life, and in Zwift. It is easy to cheat that in platforms like Zwift by putting in an artificially lower weight. If you need to do that, you need to find a different hobby. If you can actually crank out over 5 w/kg at threshold, start soliciting for a pro contract! If you “appear” to be able to put that kind of power out, and try and race in any of the organized sanctioned races in Zwift - you will be scrutinized for abnormally high power to weight ratios. The series I’ve been participating in (CVR World Cup League) requires a Strava account, a ZwiftPower account, and that racers wear HR monitors. These are all to help assess racers and to be sure top placers are legit. CVR puts on real world live tournaments where racers can win serious cash - so they are careful to screen for cheaters. Zwift has its own anti-doping administrative branch - known as ZADA, or Zwift Anti-Doping Agency.