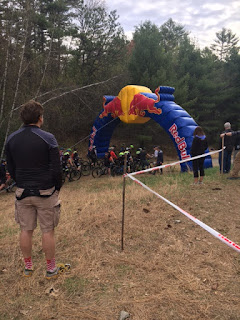 The first quarter mile or so was a fire road and the start was pretty fast, really remained me of a cyclocross race.  I was able to get myself up to 3rd position pretty quickly.  It was pretty obvious that there was a divide in ability as there was a group of 5 or so off the front pretty early on.  I was in 3rd place going into the first section of singletrack.  It was really fast, no tech to really speak of other than a moderately narrow bridge (Saul, you wouldn’t have liked it.)  Onto the next connecting fire road, I decided to push the pace and tried to put the other guys under pressure.  I took over the lead and only two guys were able to go with me.  The second section of singletrack, was a moderate climb, again no real tech.  We shelled off the 3rd place guy and it was just me and one guy from State9 Racing.  The ‘big climb’ of the race started at about mile 3, and was on a fire road, I was expecting that to be on singletrack.  I had made a decision that if the other guy went to take the lead I wouldn’t fight it and let him do the work for a while.  He did in fact make the pass and in retrospect I probably should have worked harder to keep the lead.  I think I was influenced by my road racing background where having the other guy do work is often a good idea.

The problem came on the decent…The guy I was riding with was from State9 Racing…the team that put on the race.  As such, it seemed like he knew the descent and I didn’t, he was able to open up a lead, I think mostly due to knowing the lines.  We got off the fire road descent, and I was probably 5 seconds down.  We then went into a singletrack descent that he really put some time into me on.  I ended up in that awkward ‘no man’s land’ where there wasn’t anyone really chasing me, but I had too much gap to really have a shot at making up with only about a mile to go.  In the last 200 meters or so they had a ‘pro-line’ jump and a ‘b-line grass loop.’  The jump was somewhere between the two jumps at Willowdale in height (for those who are familiar).  I wimped out and took the b-line which was a few seconds longer, but I figured I had 2nd sewn up as long as I didn’t crash.  Crossed the line 36 seconds behind the winner and about a minute ahead of 3rd. 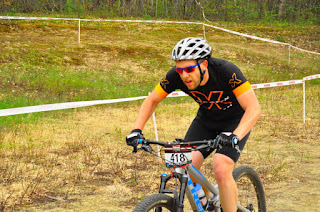 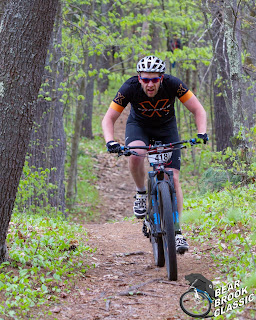 My only criticism was the podium ceremony, or rather the timing of it.  They didn’t do it until probably an hour and 15 minutes after the race finished.  So we were just hanging around doing nothing.  Good problem to have I suppose, but most other races I’ve been at they do them much faster. 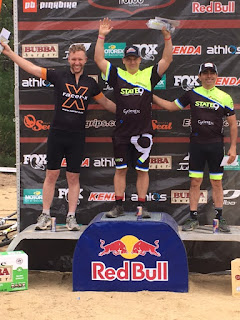 All in all, it was a great race, very fast course and a good venue.  It would be a good first time race course for a beginner as it wasn’t too technical and there was a fair amount of double track and fire road so it wouldn't be too intimidating.  Next up for me is the Killington Stage Race over Memorial Day Weekend.
Posted by Jeff at 11:00 AM