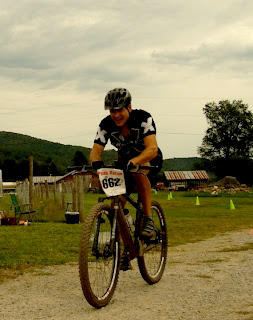 You know the cliche, "never bring a knife to a gun fight," well that's sort of what I did at the VT30 (aka Pittsfield 666...aka Pittsfield 6 hour endurance bike race) this past weekend! I was a sport level rider, masquerading as an elite racer!

Here's the deal...I love single speed riding...even more so since I switched to a fully rigid bike last season! I love the simplicity and the organic experience if offers on the trail. I do occasionally suffer, maybe a bit more than occasionally, but am always better for it. The problem is..."true" single speed riders are of the elite/expert type that are looking to "up the ante" in challenging themselves and displaying their raw physical prowess!

These guys/gals do more races in a season than I've done in total. I did my first race in '06 on a geared hard-tail and finished mid-pack as a novice. My second and final race that season was on a single-speed in the expert division, and I haven't strayed from the single-speed since! Issue is, the Vt30 this past weekend was only my 12th race ever. This hardly makes me qualified to line up with the aforementioned single-speeders!?!? It has never been more evident either...6 of the 8 racers were bonified successful elite racers with major credentials.

On the surface, I had a very successful race...I did the number of laps (4) that I had wanted to and had a better average time (1:15/lap) than I had expected. Tallied in at ~40 miles with just under 6000ft of climbing in 5:02 (4:52 riding time). I had time to do a 5th lap, but it wouldn't have changed my finishing position and the "hurt" cost would have been high. The main objective of the season is the SM100 in two weeks, and recovery lately has been slow, so keeping training/racing "damage" to minimum is crucial.

But, on closer inspection...I was 7 out of 8 with an average lap pace 3-9 minutes slower than the other 6 riders. These results suggest that I am indeed an impostor...a "never-was" pretending to be a "wanna-be" posing as a "has-been!?!?" It's all good...I love my bike & I love to ride!!!

Shout out to all the fellow Racer-X's who represented this weekend and to my wife, who once again brought home the gold...proving that not all of the SS's in our house are impostors!?!? Also to Jason & the rest of the VT30 crew for a great course and event. The atmosphere is awesome and it is definitely an under-appreciated race...do this next year if you can!