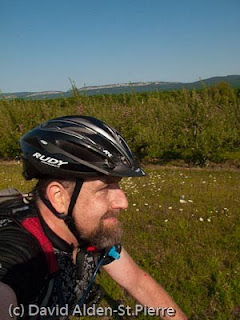 Peppy. Chipper. Zippy. No one would have used those words to describe how I felt on the morning of Day 2 of the Wildcat Epic 100 MTB stage race. I did, however, feel ready. Ready to ride and to squeeze out whatever remaining adenosine triphosphate my little mitochondria could generate.
My morning started by checking out of the Super 8, grabbing some pre-race coffee at Starbucks, and waiting for Pete--A.K.A. "Sprinkles," at the parking lot. Most people looked about the same way I felt, tired, but looking forward to another fun day on the bike.


There was another pre-race meeting where 50 miles of trail facts and warnings were described. Seriously, there's now way I'm going to remember, "when you pass the ice cream stand you'll turn down what looks like a driveway, keep going down to your right, then look for a trail on your right, cross the gravel road and head back into the woods on a short uphill and look again to your right, and then..." You get the idea. I heard "blah, blah, blah, get off your bike when you cross the paved roads." Got it. 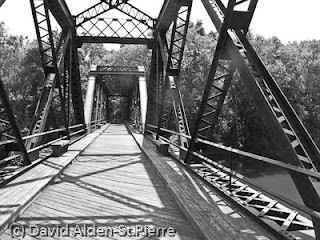 The course on day two was VERY different than day one. We again started with a neutral, rolling start through town with police blocking traffic. The pace was a little more than "neutral," in my opinion, but I wasn't redlined. We turned off the road and on to a crushed stone/gravel rail trail. We were all still in a paceline formation, and like day one, we were going fast.

We used the rail trail to head south, out of town, to get to some huge apple orchards and farms. Then, things got a little dicey. We raced through fields and on farm "roads," and the deep grass hid the ruts, rocks and irrigation pipes. It wasn't bad, but it kept you on your toes. Having done many cyclocross races through farm fields, it was familiar territory. 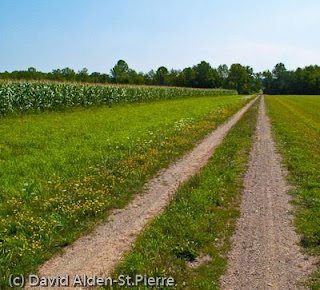 I was well off the main leader's group by this point, but I was with a group of guys that were keeping chase. I was with Sprinkles, a guy named Tom (from CT) and another guy named Sandro (from NY) and a few other riders. I'm not sure what happened, but by the time we hit the road, it was just Tom, Sandro and myself in a 3-man chase group. At one point, I was starting to feel like I needed to ease my pace a bit, and I asked Tom to just PLEASE pass me and get it over with. He refused and threatened to trackstand if I stopped. Afraid that I'd cramp and sieze up if I trackstanded too, I continued. Someday, I'll find Tom and challenge him to a trackstand competition to the death! 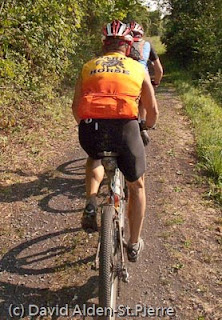 Anyway, Sandro, Tom and I formed a paceline and worked together to take the road and rail trail back north of town to some more singletrack trails. It was fast and fun. I used some of my time at the back of the paceline to sit up and take some photos...

Oh, and by the way, I mentioned that one of the things that DID register with me at the pre-race meeting was that we were required to dismount on all road crossings (I'm NOT complaining--it's for our safety). Well, there were, I think, 876 road crossings. Maybe that's an exaggeration... maybe not. In any event, I've got all of my cyclocross dismount & mounting practice done for the year!

Despite our efforts, we were not able to catch anyone ahead of us. We could sometimes catch a glimpse of a rider ahead, but he was always just far enough (and fast enough), that we couldn't bridge up. 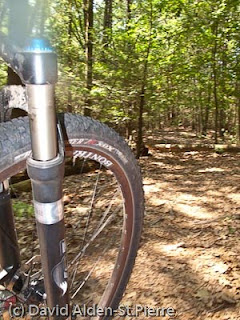 We eventually made our way to an area known as Williams Lake which has hosted local mountain bike races in the past. Here's where some mountain bike skills were needed. Tight singletrack, technical rocky sections, short steep up and down hills, and "the Cave." Oh yeah, THIS was mountain biking. I would have really enjoyed this section if I hadn't have been so tired... In Williams Lake, our three man group was finally split up. Sandro turned on the little motor I suspect he had hidden in his bottom bracket, and Tom slowed down a bit to avoid death by rocks. I was somewhere in the middle, and did the last 15 miles or so alone.

Williams Lake was fun, but on the way back towards town, we had to do a S-T-E-E-P hike-a-bike up a hill (wall?) that was probably 7 miles long. Okay, not really, but maybe 100ft? And did I mention that it was steep? Did I mention that every step was quad and hamstring cramping threat? Oh... it was evil. 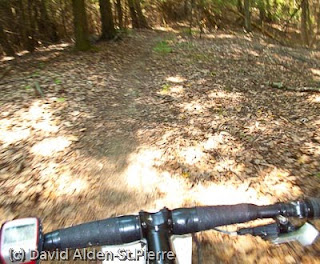 From there, it was more of a mix of fun single track, rail trail, and paved roads to take us back in to New Paltz and to the finish line.

It was another fast day, and I finished in under 4hrs. Boo-ya! Tom came in just after me, and Sprinkles a couple of minutes after that.

Of course, that meant it was once again beer & burger time!

I washed up, fueled the body, and hit the road. 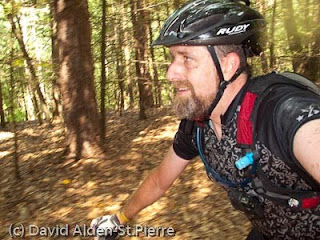 I think I came in about 15th again, and I'll be checking online today to find official stage and overall results. Not that it matters much.

All in all, the race was 100% fun, and I'm definitely going to be back next year!