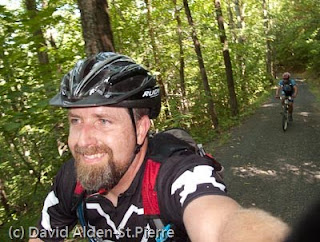 I'm sitting here at a Starbucks reflecting on my day... Today was Day 1 of the Wildcat Epic 100 mountain bike race, a two day stage race, 50 miles each day, starting and ending in New Paltz, NY. The words that are coming to mind as I reflect are "fast," "fun," "awesome," and "coffee." The last, well, because, that's what I'm drinking.

This is the first year of the race, and while I'm only half done as I write this, I'm pretty confident I'll be back. 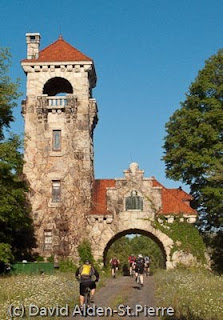 Many mountain bikers will not like the course. It's not technical, so far it's almost been exclusively on fire-roads, and if you're a strong road rider with even minimal mtb skills, you could kill it. I'm not a strong roadie, but I DO like being on my bike and going fast--both happened today.

As a side note, the course is so non-technical, cyclocross bikes are officially banned from the race. I'm glad I checked on that because I almost brought the cx machine... Another thing about the course, and it pains me to say this, it's NOT a good course for a singlespeed. I DID bring my SS, just in case something gave me the inkling to ditch the gears, but there's not doubt about it, this is a course for gears. In fact, I run a 1x9, which I think is excessive, and I was wishing for a big ring. More on that later. 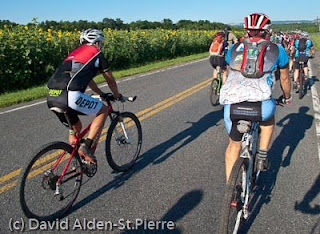 Anyway, 57 riders rolled out from the start line on a 50-mile mountain bike adventure. The first mile and a half was a neutral start as we had an escort through town while police blocked traffic.

Once the course started heading uphill, the race was on. By looking at the course's elevation profile, I expected the first 20 miles to be brutal--it was essentially all up hill. Not "20 miles of uphills," which could be interpreted as many hills to climb in the first 20 miles, but rather a 20-mile uphill (with a couple of small plateaus). That's how the elevation looked, and that's what I mentally prepared myself for. Fellow Racer-X'er, Pete Gallhager dropped me as soon as the trail started heading up, as I wanted to sit in and ride conservatively. 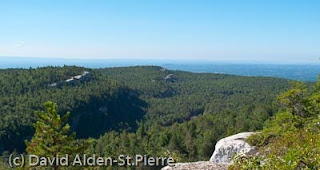 We did climb for several miles, but the climbs were fast! In fact, overall, I probably spent about half of the race in a tucked and aero position. A few days ago, on a lark, I was contemplating putting a set of aero bars on the bike... that actually wouldn't have been a bad idea! I did take some old handlebar tape and wrap the bars on either side of my stem and I'm glad I did.

I had set a mental goal of finishing in 5hrs, with a secondary goal of really just wanting to finish in under 6hrs. Imagine my surprise when I realized that a 4hr finish was possible... 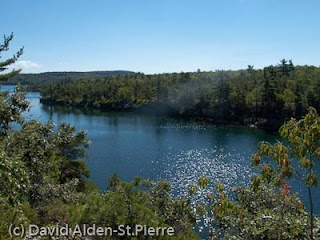 But back to the course. In a nutshell, we rolled through the Mohonk Preserve to Minnewaska State Park, around Lake Awosting and back north though the Mohonk Preserve, back into New Paltz. The views were amazing, and I HAD to snap a few pics. Actually, if I hadn't been racing, I'd probably have a hundred photos to sort through. Overall, the course was just fast and fun. It was pretty cool to be in a mountain bike race to have so much speed for almost the whole race. Don't get me wrong, I LOVE singletrack (and my singlespeed), but in most mountain bike races, the speeds are on the lower side, and you can be putting your heart and soul into the pedals at times for 3-mph.

Here, I was tucked, aero, and crankin' 30-mph at times. Loose turns were "interesting," and you had to keep an eye out for the trail markers. I'd have to say that the trails were exceptionally marked, although, I think EVERYONE took a wrong turn at one time or another. My mistake was at about mile 36ish. I took a right when I should have taken a left and I didn't realize until I was at the bottom of a very long, steep hill. Isn't that always the way? Other than that, which I take responsibility for, there were hundreds of pink ribbons clipped to trees over the course of the 50 miles. There were so many markers, that if I didn't see one for a while--even if I was on a trail with no side trail options, I started to doubt myself. I had some moments of doubt at a couple of intersections too, but there's no question that the race organizers and their helpers, were out there marking up a storm. 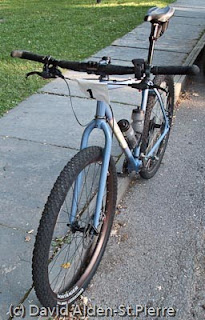 My bike remainded intact, and my fueling plan appeared to work--no cramps, no bonk. Although, I will admit, I was quite thankful to see Endurlytes at the aid-stations--I had forgetten mine (I could hear Jean's voice already if I had had cramping problems). Oh, by the way, see the number on my bike? Yeah, some races give the number "1" to a series points leader or previous year's winner, or something like that. Here, the numbers were given out alphabetically by last name. A=1. Oh, the irony...

So, as I said, the course was F-A-S-T. I was cranking my 32x12 as best I could and at times I could see some riders pulling away. If I HAD run my beloved SS, I'd probably still be on the course. Oh well. I was thinking about running the SS on Day 2 (it's in my car after all), but tomorrow's course does have some extended time on a rail-trail and at least 5 miles on the road. Does it sound like I'm making lots of excuses for riding gears? I am. I've betrayed my brethren. I've sinned. I will repent (at the VT 30 in two weeks). 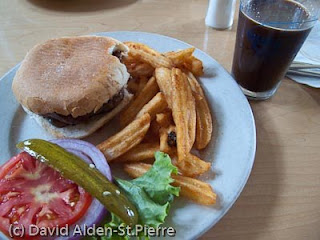 A fast, fun course, perfect weather, no mechanical problems, and no physical problems? Hell yeah! I didn't push too hard (I don't think--my legs might think differently), as I've still got another 50 miles tomorrow, but I definitely pushed the pedals the whole race. I lost a few spots when I got lost, but that happened to everyone. I ended up finishing in 4:13. As of my writing, I don't know my official finishing spot, but I *think* I was somewhere around 15th. Out of 57? I'll take it. I somehow ended up coming in ahead of Pete, but he rolled through shortly after I did. And that meant it was beer & burger time! 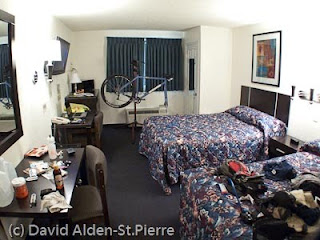 Last night I had to make the 4hr drive to New Paltz, NY RIGHT after work, and didn't roll in to my Super 8 until about 11pm, and didn't fall asleep until just after mid-night... I plan on going to bed early tonight. Stay tuned for details on Day 2! 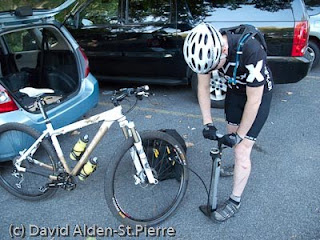 Pete, pumping up pre-race... Like I said, Pete was up ahead of me for a while, and the only way I could see where he was was to look for the white glow shining through the trees...
Posted by David Alden at 8:56 PM