PART I:
In a better late than never attempt to get ready, somehow, for 'cross season, I'm piling on as much volume and racing as I can early on here. First up was an odd-ball course in a fun race down in Brockton on Saturday - the Travis City Cycles CX race. Mixed bag of terrain, in that there were paved sections - both park trails and roads. There were flowy single track sections in the woods.
Then there was one grassy chicane type section. This race
would be the race I thought I'd feel good at, but proved not to be the case. Start was fine, especially with only a few of us racing - including Mark McCormack. He flew off the front right off, and stayed there. After some first lap jockeying, I settled in in 3rd place - but felt like it'd be unlikely to hold. I tried, but after 30 minutes, my right quad started locking up - an absolute rarity in races for me. Anytime I stood up it hurt, so i sat back down. 2 guys slipped by, including a recently downgraded pro - so in my first outing in the venerable 35+ Masters group, it was a decent day. Fitness must be a ways off, as cramps have never been an issue except when very out of shape. Better keep working then! Like the next day...

PART II:
Quad Cross in Bedford, MA was a much bigger race. This race I assumed I'd be trashed from the day before, but felt pretty good at warm up. Swung by J-Rocks pad on the way to pick up the only other cross racing New Mexican transplant on the Racer X Pro Squad. He convinced me to race this crazy Masters CAT in the first place, so he'd better be there! It is an odd assortment of weekend warriors and semi- retired super elite. I'm obviously in the former category, but was impressed with the depth in the field. On the pre-ride lap JUST prior to lining up and starting, my bike was making a unsettling noise at the cranks... turns out a chainring bolt had sheared off and my chain keeper was bent to crap!

I shot into the neutral pit area to plead for help. The mechanic got right to it - and after searching all 17 tool and parts boxes, some twice -he found a bolt. Once snugged up and off the stand, i could hear the Masters 35+ Race being prepped for launch and sprinted back to the start, just in time to cue up in the very back.... Off we went and things felt fine, thankfully. Now i just had to try and pass the 50 other racers ahead of me! Eh. I figured the days task would be to ride clean lines, keep working the re-mount technique, and work efficiently. While I never quite caught all those guys ahead of me, I did pass a few folks each and every lap, including a few in the last half of the last lap. The best part was the cheering sections - both my little guy and his grandpa, and Jamies cute ladies were all out on course. 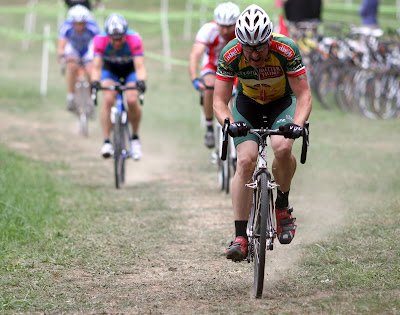 By Gloucester I might be in half as good a shape as last year, and provided a half-decent start position, I'll work those long sprint start workouts and stay a little closer to the front. Yup, that's my plan. Who else is in?
Posted by Glen Gollrad at 1:25 PM