When one hot, hard, fast race ain't enough...
Week 3 of the 2010 'Cross season saw the Racer-X duo of Jamie and I headed for southern NH, Destination Sucker Brook. Not sure if there was a brook - or if it sucked. There was a LOT of dust, and it was a good fast power course that suited Jamie and I well. We lined up for the 35+ Masters race at 11am and took off with a tight group of 35 or so fast effin racers. I had a decent start (I'll let Jamie fill in the details of his race with his report) and settled in mid-pack somewhere, waiting for the first lap jitters to calm down. The frontside was open, grassy, and all power. Found some decent lines and rode them pretty well most laps, and once through this grassy frontside, the race headed out into the woods on a nasty gravelly road section into a moon dust hard left. Somewhere in here I whacked a rock and felt the tell-tale squirmy rear end. 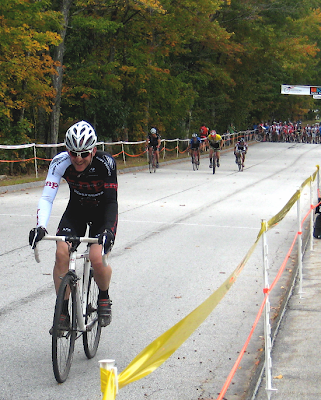 Pic by Beth and Violet

As we wound through the woods (oooh! THAT had to hurt, mr. try to hop the log and do a FULL somersault / front flip!) it got messy, dusty, and soft. Clean lines were harder to come by, so riding smart was key. Pop out of the trees and shoot into a deep, soft, sand pit with (2) chicanes in it. It was possible to ride to the first, but then faster and safer to dismount and boogie on foot to the end. Once out - we hit the pavement that took us through some turns and onto the big start / finish stretch. At that point, my rear tire was totally flat, so I limped around the corner onto the other loose gravel stretch over to the pit area. First time I ever had my very own pit bike at the ready and man! That was cool.

Rode the rest of the race tempo - not losing ground, and perhaps gaining a spot here and there. The front group stayed there, the rear guard faded - and I was stuck in the middle somewhere. At the end of the race, I did pass 4-5 guys on the backside, and cruised across the finish happy to be DONE. For this race - one of two this fine day...


...Swap out rear wheels and dump pit bike back in the pit, beg Jamie to repair the flat, have some water, sip some Hammer Gel, and zip off to the start - where once AGAIN everyone is staged up already. The CAT3 race was immediately after the 35+ one we had just raced, but jeezus - what's with the damned crappy start positions! With 90 seconds to start, I jump onto the woods to relieve myself, and literally re-mount to start racing. Truly no where to go but up, in this giant field of 75 or so racers. It was massively dusty out on the course now, and the wind was picking up. The first lap was fast, furious, and ridiculous. There were wholesale flusterclucks everywhere - and somehow I made up some ground going around a lot of them.

By the 3rd lap or so, things were sorting out - and anywhere it opened up on the faster power sections, I reeled in 1-2 guys here and there. Let me note that passing is a big mental battle on top of the physical one. My two methods are thus: Blow by as fast as possible to prevent the possibility of someone jumping in behind, or to save just enough energy while on on someone else's wheel to then stand up, accelerate, pass, and dig deep to get a "gap". Make the gap big enough fast enough, and that seems to be the end of it. I must have done it more than a few times, as I ended up clawing my way to within a minute of the winner - scoring 7th place by the end. 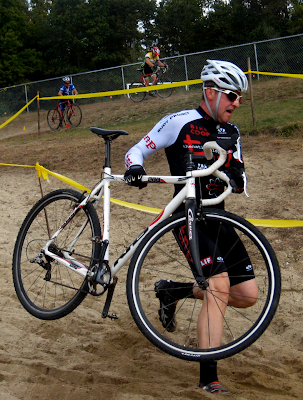 Pic by Beth and Violet

Checked with the officials that they had yet another Glen Bib Number SNAFU squared away (they did - thanks Alan Atwood and his crew) and hit the road. Next stop - New England Worlds, aka Gran Prix of Gloucester next week.
Posted by Glen Gollrad at 10:02 PM