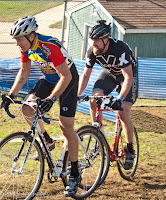 I started my 2010 Campaign for Cyclocross Mediocrity this past Saturday at the Gran Prix of Gloucester, one of the largest ‘cross races in New England. 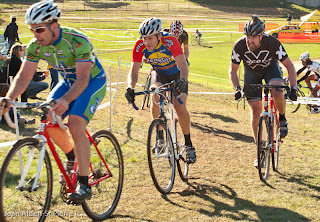 And then there’s me. And Jamie and Glen (who race with the fast guys), and Rob and Andy—two guys I convinced, cajoled, berated and coaxed into trying their hand at this crazy cyclocross thing, but they did it on singlespeeds. I’ll let them tell their own tales of victory and defeat.

This is my chance to a-“meh”-ze you with my unexceptional athletic performance. 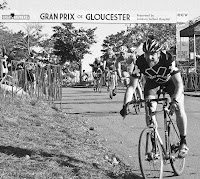 I lined up in about 74th position (according to the staging statistics at crossresults.com), out of the 125 registered racers. Not ideal, but you take the cards you’re dealt. Starting that far back, I really had only one way to go, and that’s forward. Knowing that the competition would be fierce and that my fitness would be semi-average, my overall goal was to simply finish higher than I started. Not that I had delusions of a strong finish, I will say that the start was great for the first row, and chaos for the rest of us. It was a slightly downhill start that veered off on to an off-camber trail section with a few tight turns. Perfect for the front of the pack to leave the rest of the masses in a bottle-neck of bedlam. For me, I just wanted to stay upright, and move forward. 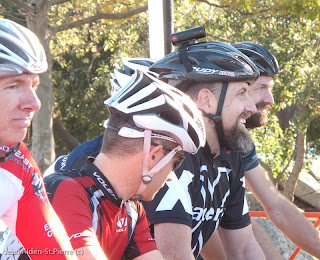 After clearing that section, the course opened up with typical cyclocross chicanery. My first of two falls (twice as many as all of last year’s cx season), was when I simply couldn’t unclip when I went to dismount and run with the bike. I fell to my side with a resounding thud. I haven’t fallen because of an unclip malfunction in years. It was fun. But that wasn’t the “good” crash. A few minutes later another rider and I locked bars and we were both thrown to the ground. Sounds dramatic, but we really just kind of slid down to the grass. The problem, for me, was that my bars/stem were cocked to the side about 20-degrees. Hmmmm… Not enough to FORCE me to the pits to do a bike switch, but enough to make sprinting and taking tight turns *interesting.* 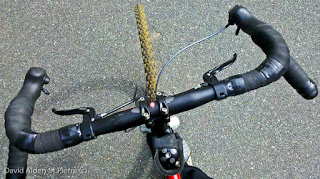 I decided to finish the race out with my left-ward lean.

The remainder of the race was pretty much lots of pedaling, wheezing, gasping and more pedaling.

It was great to have some cheerleaders—most importantly, Jean, and of course, Jamie, Glen, Andy, Maggie, and Renee. Thanks y’all! And another thanks to Jean for capturing some of my suffering on pixels. 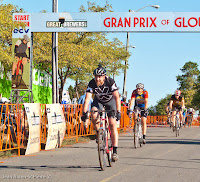 And speaking of pixels, I sacrificed some aerodynamics to wear a helmet camera. I finally got it aimed correctly so that it was just filming the ground, but at some point the mount came a bit loose, so there’s more jiggling than in a fat girl jumping-jack contest. Check it out here (also, there should be an “AudioSwap” to put some music in, to replace the clicking of the loose camera mount, but it seems to be taking forever, as in more than 12hrs… YouTube says it’s still in progress…):

My efforts on Day One were worth 54th place. Please do your own golf clap.

Next up, Night Weasels!
Posted by David Alden at 9:49 AM