As the cyclocross season is in full swing, there can be multiple races every weekend. Stronger riders will race both Saturday and Sunday, while losers like me usually pick one day. This past weekend, I was stuck because I wanted to attend both the race in Portland, ME, my old stomping grounds (as in, I was stomping the books and studying all the time), AND the race in Lancaster, MA. What to do, what to do? Initially, a merry band of fools had planned on racing in Maine, so I figured that would be the day. I pre-registered, then the plan fell apart, and soon I was the only one planning on head downeast. I was thinking about forfeiting my race entry, skipping the solo drive to Maine, and instead doing the closer race in MA, but I was still undecided. Then Mother Nature intervened. 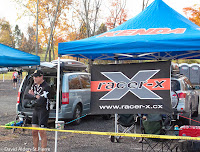 For the first time that I'm aware of, a race was canceled preemptively because of predicted rain. No, not a hurricane, tornado, or lightening storm; not locusts, earthquakes or fire and brimstone; rain. The back story is that we were expecting to get a few days of HEAVY rain and the potential damage to the race venue, which is actually a beautiful park in Portland, was quite high. Rather than destroy the park, the race was canceled. I can deal with that, AND it made my weekend's plans easier. I was racing Sunday in Lancaster, MA.

It was me, Rob Bousquet, Renee Bousquet in her virgin CX race, Andy Nook, and Glen Gollrad. Five X'ers against the world. 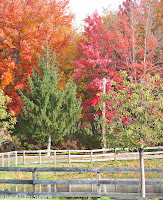 The drive out to Lancaster was beautiful and the backdrop for the race was vibrant fall colors. Stuff to really make one love autumn in New England.

I arrived in enough time to set up our team tent with Rob and Andy, get suited up, and watch Andy take off for his 2nd 'cross race ever, and his first race on a new (to him) bike. He looked good on his first lap, but I'll let him tell you what happened after that…

After the first race was over, I took off for my patented 4 minutes of mild warming up. I previewed about 1/4 of the course, and that was about all I needed. I guess I could be like many of the other races, visualizing which line I'm going to take on the "technical" sections (hey, some of that grass is wet…), while I'm spinning on my stationary trainer, but that's not me.

Anyway, I assumed my starting spot near the mid/back of the pack, and soon the race began. The course was pretty fun, good tight turning sections which I love because that's where I can pass other racers. There was one set of barriers, plenty of hairpin turns, one packed down sandy section and then the "fly over." 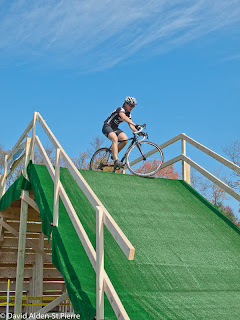 The fly over is a feature that makes an appearance at some 'cross races, and it's essentially a steep stair case up with a deck at the top and roll in back to the ground. The deck is actually a bridge that allows the course to go under the fly over (hence the name). It's kind of cool, but I personally don't think it belongs in a race. It's certainly not a difficult obstacle, but I've seen plenty of riders face plant on wet roots, so why intentionally add a feature that could potentially injure someone? I saw a couple of people crash, and for an amateur racer heading out for a fun weekend race, it's no fun to come home with a broken wrist or broken collar bone or whatever. Yeah, I know, crashes happen in races, but it's one thing to crash because of an accident and another to crash because of a contrived, man-made course feature. Personally, I think the fly-over could have been an option, but there should have also been an optional route around the bridge, but one that would have been a few seconds longer. Something like that could have easily been done with a tight, taped, chicane. That's just my opinion, and we can leave it at that.

I've rolled in on steeper, higher, and scarier ramps than this, so it was all fun for me.

I don't have an tales of triumph or woe, I simply pedaled as fast as I could for 40 minutes, and came in 38th out of 76. Smack dab in the middle. My quest for mediocrity continues!

As an interesting side note, the elevation profile looks like a telemetry tracing of someone with bradycardia and low voltage QRS complexes... I'm not sure if I see P waves...