Ahem. So - never did get that race report up for the MRC race a few weeks ago - but it was an uneventful performance, except that I raced the super-bad-ass 1/2/3 race, which puts the pedal to the metal for a whopping (by 'cross standards - long) 1 hour. Speaking of pedals....
... Well, never mind. A flat tire and a broken pedal made it technical, let's say.

On to better days! Today was perfect cool fall weather. Dry and sunny, but windy and chilly. The race being on an orchard was a treat, so the whole family piled into the car and off we went. In the "what race category should I race in today" internal dialog, I chose the Masters 35+ 1/2/3 race, mainly to race with James and the other older guy hammers.

Start went great - especially since it was a relatively small field of 20 or so - until a minute in on the fast dirt descent I blew the u-turn at the bottom and had to run the long scrabble back up. In the process I went from 5th or 6th place to damned near last. Once recovered, I started the now predictable ritual of finding a wheel to get on, sitting on it for a moment, assess the "passability" and then, hopefully - execute a morale crushing blow by accelerating by the sorry chump(s) and immediately snapping that 'elastic band'.
Yeah... in reality, it was a lot more slow motion, as the field spread out pretty fast. The grassy chicanes in and out of all those apple trees got more slippery as the race wore on - and I found it hard too make consistent turns. Too much air in the front tire and too little in the rear. I should have run slicker tires with more aggressive side knobs, as the tiny Michelin Mud knobbies were slow on the flats and power stretches, and not sticky, at all - on the off camber grass and dirt. The main problem, however - was me. 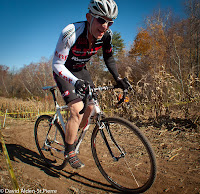 Mid-way through the race, sitting somewhere in the top ten, I rode a lap with two other guys. We'd pass the occasional casualty but otherwise stuck together. With one lap to go, I went by them and powered where it counted - quickly getting enough room toi ease off and ride smart to the end.
Oops! Who put those mushed up apples on the inside of that turn? I went down so fast on a corner, under a tree - that both feet were still clipped in! This was a first for me... as I wriggled like a fish out of water, I frantically got unclipped, upright, and on my way again - but now my chaser was MUCH closer. Doh! Thankfully there was but 1/3rd of a lap left at the end here, and I figured I could hold him off. I did, dismounted and booked it through the barriers section, and was done.
Dave's Awesome Costume Race video:

Not sure of official results, but it felt like 5th or 6th place. The best part was seeing Dave on course as a car crash victim - then heckling my sorry ass, as usual, as well as my little guy clanging the cowbells and absolutely screaming for me to GO GO GO!!! Unfortunately, Jamie was on the sidelines too - turns out a group of Euro 'Cross Thugs took him out on a secluded part of the course, way out in the trees... It's a shame, as Mr. Ryan-White is riding mighty strong lately, and will be doing some damage once he can shake the demons of ill will here. In the meantime, I'll struggle to keep up with him during our workouts - which are carving, shaping, and making a not-so-shabby 'cross racer out of me.

Still a bit of a spaz at times, and still am weary in some corners - but am feeling much better running with the bike, and much better on power sections.
Can't wait to see some more pix - and to hear some other stories! I jumped at the keyboard time while my little dyanmo of a cheering section naps, and my support-crew wife is out running errands. Bikes are cleaned and prepped for the upcoming big-time races. 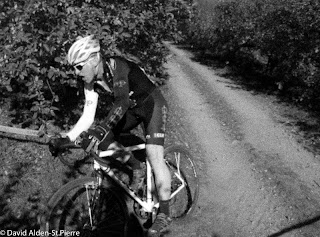 Happy Halloween everyone!
Posted by Glen Gollrad at 2:42 PM