We interrupt this lazy off-season to bring you a cyclocross race. 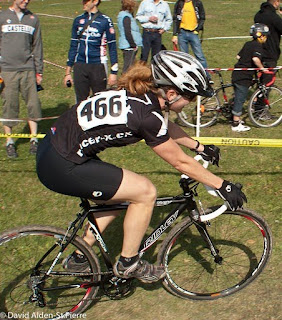 After the SM100 I was done, cooked, kaput. I wanted to forget about all things bike related and just drink, eat and be merry with fall festivities. My indulgence and gluttony was in full swing when Rob tried his first cyclocross race in Gloucester. At the time, I was totally content to have a beer and cowbell in hand and cheer on from the sidelines. As I watched the race, I could see the pain and anguish in the faces of my fellow teammates as they suffered through the course followed by the unmistakable twinkle in their eyes at the finish and accomplishment of surviving. Then came the post-race camaraderie when they shared war stories and talked about the carnage. I quickly realized...I was jealous.

Fast forward to a few weeks later and I'm lined up at the back of a pack of women/girls aged 14 and up to get my piece of that twinkle and camaraderie. 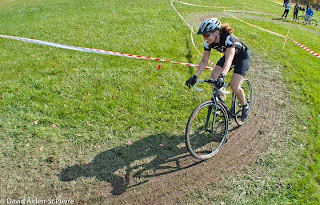 With about 15 whole minutes of practice under my belt on a new bike with gears, I was off and racing. I really had no clue what I was doing and it was evident. I was a disaster at the barriers and the run up, but at least I could pedal and smile doing it. Thankfully, my mountain bike skills paid off and I passed a good chunk of girls early on through some turns and "technical" spots. 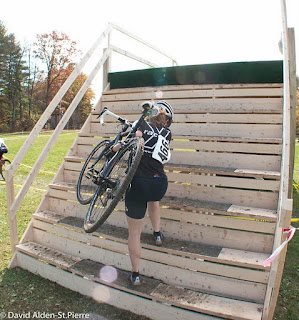 I found a good spot in the pack and pressed on. I suffered, sucked wind, and cursed through the rest of the race, but I managed to barely fend off a girl on the attack at the end and finish in 10th place. Considering my lack of fitness and training at the time, I was pretty damn happy.
This CX racing might be just the catalyst I need to get me motivated for training and biking again...right after I finish this cider donut I got on the way home.
Thanks to Dave for the pics...I couldn't get any of ours to load!
Posted by Renee at 8:44 AM