It's been a few years since I hurt like I did this past Sunday in Warwick, RI. In fact, I haven't been so completely thrashed without waking up in an ambulance (which happened at Snowmass, CO in 2004). The same wicked fast Masters 35+ group lined up - about 50 of us all told, and tried to stay warm on this very windy, very cold morning. I dug deeper than I have all year this blustery fall morning - and paid the price.

The drive down was again, unremarkable - in that it took 90 minutes and went smooth. I felt good; rested, fed just right, caffeination was going well, and just generally felt solid - for lack of a better word. Got to the venue and felt the cold breeze right away. I added thermal tights over the race kit, embrocation, and leg warmers - and headed out to pre-ride the Day 2 course. Oooooh! It was shorter, and faster - but had 2 long, sandy sections that were absolutely not rideable, plus a set of barriers on a steep grassy hill. Ouch. One sand section had a soft, steep, loose run-up, the other was recycled from day 1 - an abrupt off-camber 90 degree turn onto the beach... except they gave us a little more grassy area to try and set up a run for the sand. I still couldn't ride it - but so it goes. Otherwise it was similarly fast, smooth, and wide-open. And cold. And hard.

Head back to the car, set up the trainer, and start spinning the legs out with 45 minutes to go to race time. In the sun, out of the wind, the weather felt just fine. When clouds would blow by and the wind picked up - it felt cold on a stationary trainer! Oh boy, this would be a challenge to layer correctly; warmer gloves, leg warmers on, tights off, long sleeve base layer on, short sleeve one off, and so on. Just when the hell did racing get so complicated in regards to wardrobe? I'm old, and seem increasingly challenged in the thermal department. My hands are always cold - but somehow I'm always to hot when racing... WTF?

Got ready to roll down to the start and rode slowly, trying to avoid any headwind by hiding behind trees and pedaling at a walking pace. Watch the end of the 45+ Master race and spin around the paved area around the start - and moseyed over to the staging area. Turns out I moved 1 row forward this day - so now I can see all those red, white, and blue kits on the front - as well as the black and red kits on the mob of Bikeman guys. Today the start went up the same paved hill, but then took a hard right into the woods. I've found that the strategy that works, for me - is too work a little harder and stay on the outside of the turns in the start melee. Bam! Off we go - as predicted we take off like a fucking bullet. Again, my start is as good as I can get - clipped in, accelerate, up-shift, GO-GO-GO! Into the woods I am immediately in great position and am fighting hard the whole first lap to keep it. The Masters CAT is amazing at how fast we go off the line - and how damned fast it stays the whole race. My plan was to survive a lap or two and re-assess pace - but in the meantime, kill it to stay with the guys I'm with. It just so happens that I'm with the beginning of the official 'chase group', behind the stars-and-stripes group. We had 5-6 guys absolutely throwing down, riding smooth, and accelerating out of every turn - and man! On the pavement these guys hit the afterburners.

Laps 1 and 2 go like that. I dug to stick the wheel of a skinny fast Bikeman guy (same guy from yesterday - a little shaky in the technical stuff, but holy christ, FAST everywhere else). It was a blistering, dizzying race at that point. I got some crap in my left eye - but it wasn't too bad - but there was never a second to try and adjust / clear it. At the base of the first sandy run-up I dismounted and shouldered the bike as smooth as can be, boogied up and around the climb, remounted (in too big a gear, however) and tried to close the small gap up to Mr. Bikeman and KA-BOOM!!!! 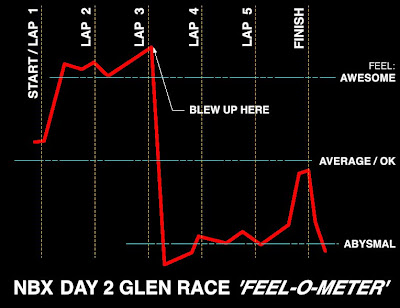 Trying to pedal the bike all of a sudden seemed really, really hard. Hell - focusing on the course was really hard. Not hurling the little food / water in my system was really, really hard. When you here Paul Sherwin and Phil Liggett talk about "hitting the wall", "cracking", "having a bit of an off-day...", "popped", and so on - that was me. All systems shutting down - no matter what my brain tried to get my body to do, it would not work. No response. System Protection Mode seemed to be activated and required I soft-pedal and try not to crash into a tree or other course obstacle. Amazingly, this was very hard all of a sudden. It felt oddly similar to when I suffered an Atrial Fibrillation years ago, where nothing feels right - just, well - wrong. I go through this next lap at 1/2 speed, barely able to hold the bars straight - and start to assess the damage. Within 30 seconds, 6-8 guys blew by me like I was going backwards. I can't / don't respond. Another 30 seconds and 2-3 more guys come around and I grab a wheel. I can just hold it. I settle in here for a lap. In fact, it feels so good to take it easy I hold this pace for another lap...

...Finally, on the bell lap / last lap, a little bit of a fire has returned to the boiler room. One of the two guys I had been "actively recovering" with, and myself - take off. More accurately, he tried - and while the other fella fell back - I was able to ride with him. On the sandy run-up I run past him as he tries to re-mount too early and bogs down in some sand, in too big a gear. Whew! I absolutely crush it (well, it felt like I did - but was probably 150 watts...) and accelerate towards the barriers ahead, and just about crash trying to dismount and run WAY too fast - but survive, re-mount and GO! I said GO!!! Huh. Shit - he's still right there. With half a lap to go, once again in a race I feel like I've tactically blown it - as he's on my wheel and I'm destroying myself getting around the course. After the second-to-last hairpin turn, I stand up and punch it. I open up a little bit of a gap. Flying through the last hairpin turn off the dirt and onto pavement - there's a tiny gap still there, so I stand up and start sprinting about 200 meters out. At last - I snapped the 'elastic' as he can't stay with me. Yes, I won the sprint for 21st place, dammit - don't try and stop me.

I grab my jacket and head for the car - still trying to not vomit and now wondering what the hell is wrong with my left eye, as it's blurry and wet from the tears issuing forth, trying to flush the debris out. Off the bike, it starts feeling better - as does sitting down in a warm car. I see the CAT3 Race take off - 100+ racers strong, and it looked nuts. Glad to be a spectator now, though given the abuse I put myself through in the Masters group, I waiver for a moment - nostalgically thinking of riding at the front of the group, having fun, in contention... but then shake the thought, as I'd never be able to have tested 'what I got' like I did this weekend in the CAT3 races. What I've got is an alarming loss of fitness - but after racing these short hard races, then taking the days in between 'easy' have simply left me devoid of sustainable top-end punch, and has obliterated any endurance I had. One more race in two weeks, then a long post-poned "off-season". That will last for 4 weeks - then? Time to build for 2011! Onward and upward, right? Hell if I ever feel as poorly as I did this day - and will adjust training / recovery next year accordingly. Back-to-back 'block intervals' will make a late-season return, as will an earlier start to Jamie's 'cross base-camp / skills / intervals weekly workouts.
Posted by Glen Gollrad at 10:25 AM