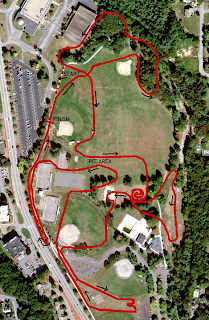 I forgot how down-and-out Fitchburg, MA can look in places, as it did on the way to the venue where the first annual New England Regional Cyclocross Championship races were held. The venue itself was fun and quite scenic, and the vibe was anything but down-and-out; a park setting and a course that was fast but took skills as well, complete with a 'crop circle' - or circle of death. Yes - I got dizzy, but no - I did not die! As a CAT2 I was made to race up in the elite group, not with my 2010 peers, in CAT3. This was good. I like pain and suffering - and was excited to try racing with bona-fide pro's. On the start line, I had second thoughts.... Why did that upgrade go through so fast, anyhow...?
It was cold, and racing at 2:30 meant it would get colder as the race went on. All 60 minutes of it. With about 25 starters, it was a small field, but packed some serious punch. Justin Lindine (11th at Nationals last week!!!) Adam Myerson, Manny Goguen, Kurt Perham, Johhny Bold, Brian Wilichoski (Cyclocross World.com - yes, friend and grassroots team mate of Timmy J.), and more. All names I know, or have hear in contention in the biggest races in the country. Who the hell am I, anyhow? After a minute, I set the goal of not getting lapped. Twice.

Bam! Off we go, and small field or not, the pace was insane. I grouped up pretty quick, much like 2 weeks ago in Warwick - with the initial chase group. It looked like 4 guys were off the front from the gun; Lindine, Myerson, Wilichoski, and Perham. 3-5 of us guys yo-yo'ed a few laps, then I cracked. Again. Just like Warwick. Again. Both quads refused to work properly, and again, standing and actually pedaling was not an option. Again. Late season lack of fitness. Late season fatigue. Late season laziness.
What has happened? More on that later in this post...

Again I found myself falling off the pace, and AGAIN off the back of the race quicker than a pile of lead bricks in a perfect vacuum. All I know is about 6-8 minutes into this twilight-zone, I started coming out of my mid-race crackage, and could hear folks cheering for some guy behind me - though obviously getting closer - that "last place wasn't good enough". Yikes! I hoped my debut would be a little less awful, but at least it appeared I'd not get lapped. I hooked up with another straggler - a term I hesitate to use as this guy in a WheelWorks kit was turning the screws hard - but alas, we were bringing up the rear. I rode his wheel for a lap, then came around and pulled for most of a lap - then with 1 to go, he came around as we started it and I knew if he kept up his pace the best I could do was hang on. No amount of crack cocaine, speed, or clenbuterol would fire up a sprint in my sorry ass if he simply kept the pace he was riding. Hell - I felt lucky to stay on his wheel, and frankly relieved - especially in the two headwind sections.
THAT is the face of pain - despite the stylish black/white/red skinsuit: 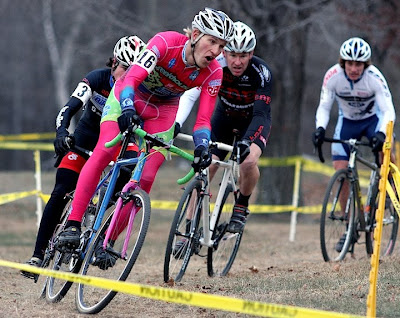 photo by: Peter A. Banach / SmugMug
We spun out the lap - and twice he stood up and mashed a couple of attempted attacks to no avail, as I was glued to his wheel like an old threadbare tubular tire. In the last 300-400 meters I entertained the notion of trying to come around - but when we hit the last 100m I knew it'd be impossible and stuck his wheel right across the line.
Again I felt nauseous and dizzy at the finish line. Again I cracked mid-race. This 'cross season has been interesting in that I think I've pushed the envelope in terms of race-day effort / output versus training and prep. Let me re-phrase that; I've been doing JACK SHIT for training these last 4-6 weeks, and have paid dearly at the races. 3 weekends in a row a few weeks ago, and no training / recovery between weekends left me trashed. Throw in all those external stressors in life, a little cold and subsequent antibiotic regiment (thanks Dave!), and then the holiday wind-up - and presto! Race fitness seems like a fleeting, tertiary concern at best.

I'll tell you how I washed out at the end of this 'cross season: I dropped the ball and discarded the Wednesday Night Workouts. Jamie had designed a fantastic series of interval workouts that were honing and sharpening my fitness and skills on the cross bike - building on decent endurance and a little late-season pop (ala the Beverly and Salem Crits in August). Even on weeks when I had raced the weekend prior, and was racing the upcoming weekends - those 'hot laps' workouts really seemed to be forging a solid base to launch good race form from. A few easier spins before and after balanced things out well. Ah well, I tried, but couldn't muster the consistency needed the last few weeks of the season to finish strong. While I'm rambling, I must admit that my (1) race I rode a tubular wheelset made an impression. The chattery gravel or grassy courses are where they seem key to riding smoother and faster - with a hell of a lot less lower back, neck, and arm/shoulder fatigue. Must hustle in 2011 and get a starter tubular wheelset.

In the big picture, the 2010 'cross season was awesome. A number of big race top-tens, a few podiums, and my first big win. Better yet were the events where we had a number of Racer-(c)X'ers out there too - as I have some great memories of cheering, heckling, and bell-ringing. Hell - this was also my debut year on a rigid, singlespeed, 29" wheel mountainbike too - and that was cathartic. Throw in an atypically dry and warm late spring, summer, and fall - and presto! One superb season of riding - from Tour of Battenkill through to this past weekend; from grassy chicanes to Gloucester and good friends new and old - it just doesn't get any better.
Have a great holiday and off season all, and look out 2011!