News flash! Rumblings of an internal upset among the 4 Racer-X Time Trial nuts. er - team: Dave not only knocked ONE SECOND off his time from the previous effort, out on the lovely training TT race loop t 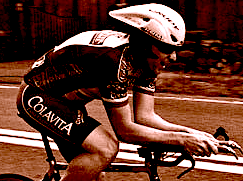 hrough Hamilton - but finished way out ahead of a lot of the field, and our very own J-Rock / Jamie-Skinny-Fast. WTF you say? How can that be? Well, it was a wee bit rainy out there, and while I saw it as an opportunity to race AND get a free bike wash - J-Rock and Roll was afraid to get a little road grime on his TT rocket machine. No matter what he says, I'm kidnapping his disk rear / 80mm deep front wheelset next week, as he keeps SAYING he'll show up, but has a quiver of excuses to shoot at the target: a measly 12.5 mile ride... though maybe he's short some entry fee loot as I keep dodging my IOU I have out with him.

What's $100 between friends? Anyhow - just as they got everyone through registration, the rain picked up a bit - becoming a steady downpour for the first 10 minutes of the race. It reminded me very much of the hard working messenger days in NYC - those warm summer rainy afternoons where the streets were not only cooled down - but cleaned off, and felt FAST! Someone noted that there was less friction / rolling resistance on a wet road, and I still have that idea in my mind when I'm actually riding in the rain. I could have done without he 4" deep puddle formed in a low spot right at the start of Western Ave - as well as the genius bustin' a 17-point "U Turn" right after - forcing me to nearly stop.

Did I mention the course, while laden with quite a challenging variety of sections - is open to traffic - so there is always the chance for automobile interference at the turns, at the start, at the finish - or any number of the 6,482 intersections along the way. It is Massachusettes after all - a state not known for it's sparse population nor for it's friendly drivers. As long as one can accept that fact, get zeroed in on the proper mental / zen state - it's a snap. It's damned fun absolutely hammering all-out for the entire time it takes; from the blistering fast 22:36 time of a national champion - to the more sedate amateur numbers tickling upwards of 40 something minutes for the same loop.

I can safely say that after the (2) Team Time Trials last year - that the Individual version is awesome as well. Indeed, add yet another discipline to the collection of bicycle racing pursuits I've fallen for. What can I say? I'm a sucker for just about any pedal powered two wheeled racing format! I do need to get that dang single speed out for another race or two before Hampshire 100 - so let's see what's out there guys and gals!
Posted by Glen Gollrad at 6:51 PM