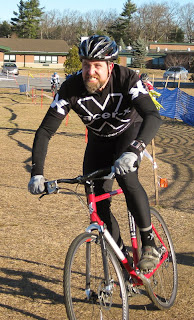 So another race is in the bag. In the history books. In the toy box. In the cheese filled balloon. Or whatever. It was cold, it was early, and it was fun. I felt better than I did last week, but still lacking some oomph. I've ordered some oomph online, but with the holidays, I won't probably won't have it until later this year. Then there's some potential compatibility issues and I'm not sure if I'm going to have to upgrade the whole system. With my performance circling the drain, I've decided to focus on something that I have a bit more control over, and I'm just going to focus on looking good. And damn, I nailed that.

The race started with a "parade lap" around the running track. I hate parades. After the parade loop, we took a hard hairpin left turn up a few stairs, then the racing began. 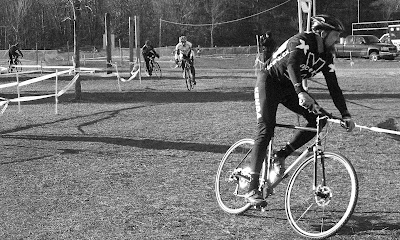 Personally, I enjoyed the course. It had fast sections, tight sections, and even a quick spin in the woods. Some super slippery run-ups and good up hill and down hill rounded out the loop. I know where my strengths are, and where my weaknesses are. I can handle my bike around tight, off-camber, frosty and dew covered turns, but I can't seem to hold my spot on the power sections. I did my best to pass my fellow racers while they were slip, sliding away, but I'd get passed when the course opened up. Damn. Gotta spend some time in the pain cave working on that sustained power...

I even got past by some delinquent singlespeeder. Stupid hippie, ever heard of a razor?

Anyway, after four laps of fun and frolic, it was over.

29th out of 51. I got to race with Rob and Mike. I got to get yelled at by Jamie, Glen and Renee. I got to have a hot chocolate. I looked good. All in all, a good day.
The ice weasels, they awaken from their slumber, and they demand blood...
Posted by David Alden at 5:55 PM