After a great race on Day 1 of Sterling, part of the Verge New England Cyclocross Championship Series - I was ready to test the legs on this cold morning, Day 2 of the weekend. I've had a good track record of doing a little better on day 2 of 2 day race weekends, but felt old and tired Sunday Morning. Perhaps it's because us amateur CAT3 folks get grouped with the 'elite juniors', like Nate Morse - who train on the heavy hitting C.L. Noonan / Corner Cycle squad - which happens to turn out whole families National Contenders, like the Keoughs! Or perhaps that I'm just old.

I knew as I warmed up it would be a little tougher than previous 2nd day efforts, so I took it down a notch. Todays group was filled with Verge Series elite contenders - not just the blistering fast kiddos. Names that have plagued me in the top of the CAT3 cross results all year, like Chandler Delinks (cyclocrossworld.com), Ryan White (crossresults.com / JRA Cycles), and Synjen Marocco (also of the C.L. Noonan / Corner Cycles team) were all there - and more on the muddy start track / grid. Chandler and I exchanged a few words (you and that Austin Pferd team mate kid / character - die in hell! (j/k)), as did fellow Colavita Racer Jason Moriarty - aka JayMo - and then Alan counted us down. 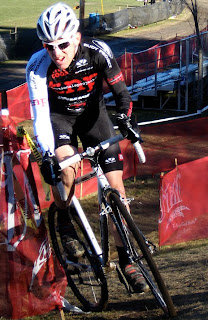 The whistle blew, I had a great start - clipping in, shifting, accelerating. By the time we came around the track, heading for the dismount / run-up, I was amongst the front 20 or so racers. Up the slippery steps, onto the tough off-camber re-mount we went. I hopped on, clipped in and steered upish hillish, to avoid the deadly concrete wall / drop off 100 feet ahead. There was a clip, crunch, and then a red flash to my right as Chandler somehow managed to clip in and flip over. Hey - I was just kidding about that die in hell stuff; but see you later! I punched it and then saw crash #2 in as many seconds - 2 or 3 guys crashed off / down the drop and squarely blocked 80% of the course initiating a pile-up. Once again luck played a roll in my race - as well as my acute reaction time (self preservation) and mad skills (luck again) as I swerved JUST right of the mess and focused on 6 or 8 guys ahead. Nate Morse and Synjen among them, if I recall correctly. No sooner were things settling in when it was hollered over the P.A. that one of the victims in the crash was Austin Pferd - who just yesterday had ridden away with the victory. Hope he's alright; but see ya later!
Steep Climb = Grimace 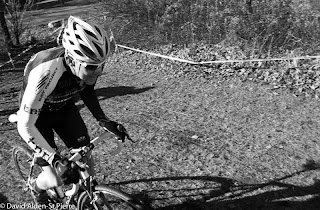 In the first 2 laps, I rode with this small group of Nate, Curtis, Synjen - and one other guy. Other guy (who went on to win - Toby Wells) pulled away, and Nate and I sat on Curtis's wheel. Then Nate went around. Then we were like that for a lap or so - Nate pulling, Curtis and I sucking, then POW! Curtis stood up and pulled away like his afterburner just got punched. I stuck Nate's wheel when he tried to respond - but then drifted back 10 bike lengths or so. I'd close at times - then drift back at others. That is how the rest of the race went, essentially. By the last lap, Ryan White was breathing down my neck - and in fact had been trying to close the gap for 3-4 laps, but I somehow held him off. Perhaps his was the broken chain out on course - or he flatted, or his pedal snapped off - not sure why he didn't reel me in and lay waste to my sad old butt. I'm curious to see the video from his bar-mounted camera.
That's Synjen, blue/yellow(?), and Ryan, - chasing me... please stop! 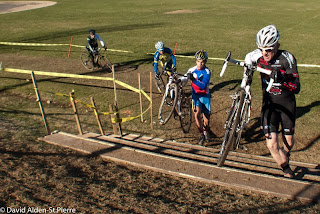 That's how we finished; Toby in 1st, Curtis in 2nd, Nate in 3rd, myself in 4th. Funny that most of the race was simply maintaining order by trying to ride clean through the gloopy "transformer section" (please dispose of that section next year, guys - it's useless and dangerous, especially since theres a huge filed right next to it) and to keep power up on faster sections, and to not slip and fall on the slippery run-ups / steps. I'm sure I didn't almost slip and fall from cracking up - as Dave was everywhere at once somehow - snapping photo's and heckling like a mad man. Good times when 4-5 team mates can get out and race / gossip together.
Pushing hard to stay away... (pic by Jamie) 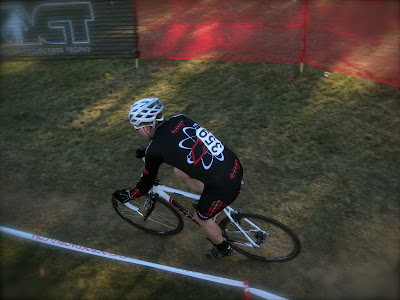 'Cross season is winding down fast - with another 1-2 weekend in Warwick coming up, then 2 weeks after will be the New England Championships in Fitchburg, MA. Then? Beer and blueberry pie training can start in earnest.