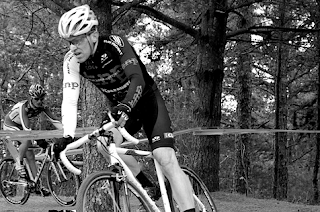 After 3 years of racing 'cross - I finally sprinted to a win. I have not been so worked over, cracked, cramped, ready to puke in a mighty long time. It felt, in a word - sublime. It takes a lot of work, as you all know - to train, balance life, family, work, money, responsibilities for us amateurs - and not that I do it to win, place or show - but shit! What a thrill.

After an OK start, from the back, no less - I started picking guys off, right away. I was going to turn myself inside out to NOT let the 15 year old phenom - Nate (?) get away so easily this fine, cool, cloudy day. After 1/2 a lap, it was him out front, and me - planted on his wheel. We opened up a good gap in the first 2 laps, working together. I had said something like "lets work together and see if we can stick it for the win", and that was the plan. Well, provided I had the gas in the tank and could ride my bike smart...

He obviously had lots of support - which was fun hearing all along the way, and kept us going. With 2 laps to go, we saw a flash of yellow shoe covers come up on our rear and now had THREE guys together with 1 lap to go. The 3 sand pits, just before the start / finish were deep and soft - and the previous lap I nearly lost it on Nate's wheel - so before the climb UP to the grassy fast stretch, just before the sand - I drilled it, passing Nate, cresting - and accelerated at those damned things. Whoosh, whoosh - whoosh. cleaned all three of them, sped through the U-Turn, and hit the pavement fast. The three of us were back together mid-way through this last lap - but no one came around me. I was a little worried I had blown it tactically, as I now dragged these guys around the whole course - including out in some exposed windy fast stretches, and was burning every match I had. I think I found an old pack under the back seat of the car - and started firing those off too! Mr. Yellow shoes said something about riding on my wheel and not contesting the sprint, but I've heard all sorts of tactical stories and misinformation out there before, and thought "thats cool, but I better give it everything anyhow..."

There was another fast stretch, past the pits - then we dove into the woods. Those guys bunched up on my wheel a bit, as I could not find a clean line - but still, they couldn't / wouldn't come by. At the base of this woodsy slip-n-slide section, we hit the nasty climb (behind the bleachers for those who know it) and I pounded my pedals for all I had - feeling the quads going fast. This was my move - and if I could survive it, crest it and stay fast, fly across the grassy curves and be first to the sand pits - AND ride those clean, I vowed to sprint for the win, or die trying.

Onto the grass, the klaxons were clanging in my ears - as I had hit the wall, and was running on emergency reserves now. I lined up one sand pit - whoosh! Done. Lined up the next - WHOOSH! Done.... the last one merited as much of an acceleration as one could muster - so I lined her up, and Whhhooooshhh - WHOA! That was close - almost clipped the tape & stakes. Onto the 100m of grass, into the U-Turn, and onto pavement - damn! The yellow-shoes guy was still there. I dug in, ready for anything, and wound up all I had - and HOLY. CHRIST. First across the line! Yellow Shoes, then the 15 year old rocket Nate. 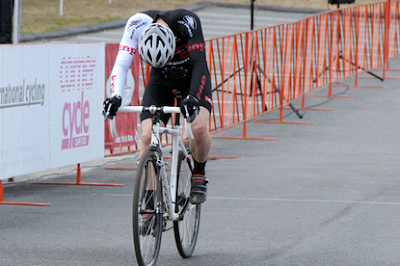 I'll finish the season as a CAT3 but I may now have the points needed to *gulp* upgrade to CAT2, then I can retire.