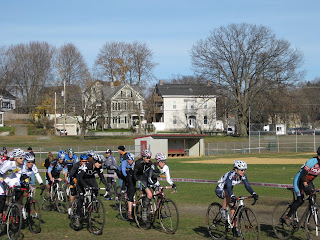 I'm still trying to get a feel for Cyclocross. I thought I pretty much had everything all figured out after my second race...GO HARD. That's it. Just find your pain cave and suffer as much as you possibly can. My opinion on this hasn't really changed much, but I do think there is a bit more strategy involved if you want to place.

After my fingers had sufficiently gone numb from waiting out in the cold for my 1:00 race, it was time to stage up. I had a decent race at Canton, getting 7th out of 42 in the 3/4, so my points put me in a fairly good position. Although I'm sure it was just my imagination, when I worked my way up to the front line of the 3/4 gals, I could almost see their necks craning around to check my number and whispering, "Who the hell is that?" I sort of felt like I was the out of place new girl in class that no knows or likes. Did I stink? Did I not have the right clothes on? Can't you see how cool my Racer-X jersey is?? I felt really pressured!!

With an adrenaline fueled start and the determination to prove that I belonged, I found myself taking the lead by the time we did a hook around the first tree. 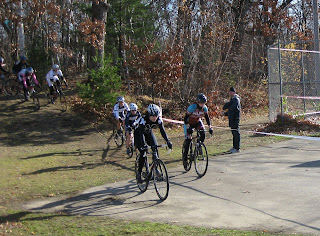 Needless to say, it didn't last long. What happened next was all a blurr. Probably because the spike in my heart rate had my brain and eyes starved for blood. There was a crash after the first barriers and my rear spokes ended up in a tangled mess with another girl's handle bars. Soon after I did a nice face plant in the dirt on one of the technical corners. I could just hear the girls laughing at me as they all blew by! "HA HA Racer-Xer...See?? You're not one of us after all!!" I tried to buck up and keep going, but it sucked all of the fight and wind right out of me. Rob was a true champ cheering me on and he kept me in the race long enough to fight my way back to 12th.

Many questions remain: Did I go out too hard? What happened at the barriers? What would have happened if I didn't crash...could I have kept it up? Am I passing in the right places? Is there a right place? Was that really a chicken wing elbow she stuck out at me when I passed her or was she just scratching something?

By the way, instead of a smile, I'll leave you with a picture of my kissy face. Really, I was trying to tell Rob that the reason I'm at the back of the pack was because of TWO (read the lips) crashes. 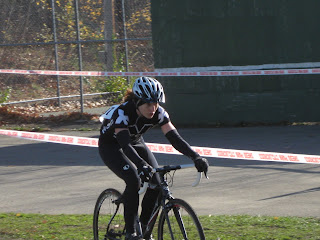