I'm coming back from a miserable race performance two weeks ago at Applecrest Farms, and if I hadn't have thought that I could have done any worse, I was wrong. I lined up at the start of the Master's Cat 1-4 race with nothing in the tank. My brain was writing checks that my legs couldn't cash. I had brought a rubber chicken to a gun fight.


First off, I could be criticized, and rightfully so, for not warming up or pre-riding the course. Next, one could also comment that my training, as of late, would actually be called "not training," in most circles. But, at least I can rule out being "over-trained" as a source of my lackluster riding.

On a positive note, it was AWESOME to show up and see another Racer-X jersey in the Cat 4 race--I hadn't expected to see Mike Lawless out there, so I was pretty pumped. When he crossed the line, finishing his first 'cross race ever, I hoped I could capitalize on his fatigue and lack of 'cross experience, so I yelled "go Mike, one more lap!" He didn't fall for it. Great to see you out there Mike--hopefully there will be more. 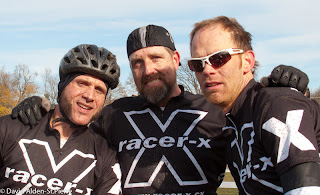 It was also SUPER cool to line up with so many fellow X-ers in the same race. I was with Jamie, Glen, Rob and Andy… Well, for a little while at least. Then all but Andy left me for dead.

I'll spare you the details of "my" race. Suffice it to say, I really, really, really wanted to drop out. Unfortunately, my bike was working fine. I even tempted the pinch flat fates by hopping the barriers on a couple of my laps, but, no pssssssssssssst for me. I rode, I suffered, I finished.

The course was pretty cool, with a good combination of fast sections, loose technical turns, and two meaty climbs. One climb had the added bonus of a waffle passer outer. With no syrup, they were quite dry.

Despite my anemic performance, I had a good time. My lovely wife was there to witness my athletic prowess, it was great to see Dave McCrimmon and the aforementioned racers, and plenty of other fellow 'crossers.

Several hours later--and after a beer and some food, I'm psychologically ready to think about the next one. Sterling, charge up that defibrillator, here I come... 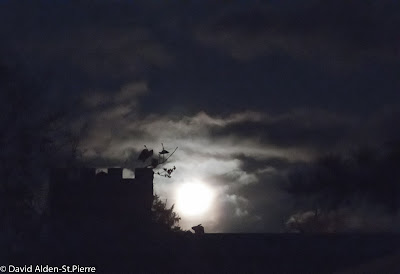