So much for the fabulous crossresults.com rankings - where I've worked through some good results and usually am granted a decent start position... no, not in the Verge Series - where I've not done ANY of the races this year. Mid/back of the pack start position among the hooligans, degenerates, and singlespeeders (just kidding;)) was where I'd be - and would be working VERY hard to catch the elite end of this CAT3 / Junior Expert group. Can't everyone agree on a rankings system? No matter...

Great start concept - a big 1/4 mile running track where we did a full lap, then peeled off to the huge slippery run-up. Off we went. Of course, given the twitchy, over-eager, under-skilled and very excited mix of racers in our field (of 97 racers) - half way around this parade lap there was a MASSIVE, bone crunching, bike smashing pile-up that seemed to start to my left, just ahead - and amazingly took out everyone around me. I had to dodge (1) cart wheeling fellow to my right, (2) tumbling / sliding guys just ahead, and a fierce swerve to my left. I ended up sort of pinned against an infield chain-link fence - but was unscathed. Of course, the lead 35 or so guys were disappearing fast! No where to go but up... right? God knows what the hell was happening behind me - but I decided to not look.

With 45 minutes of racing ahead, I plotted the attacks methodically and steadily. The wind was howling, so on exposed stretches I'd sit on wheels or groups and wait to pounce. This was going great, and I was feeling better about 3 laps in, as the traffic thinned out. I must have been about a minute back from the front few fellas, now sitting in the top 15 (according to the onlookers / various cheering sections - though these cheering sections were always cheering for the guy just ahead, or just behind me) and was finding good legs. The gaps were bigger now to jump across, so I tried to be careful and attempt said jumps with a tailwind.

With 3 laps to go, I was scratching the top ten and fell in with 3 fellas, who were riding fairly well and almost working together. I stuck with them until the huge run-up with 2 laps to go, ran-up faster than them, remounted and dropped the hammer. At the bottom of this section, I found 2 more guys - and one promptly went down, then executed a perfect full-course-blocking spread, with one foot clipped in and one hand on the bars - he honestly blocked the whole course! As soon as he was back on, we chuckled a bit. Then I went by - have a nice day (Note - post race banter with said fellow was fun).

What to do now? The leaders were still holding on to a decent gap - but what the hell, right? A guy can try to catch up. And so I did. What was cool this whole time was Richard Fries (?), the awesome announcer at these races - was egging me on, always noting my crappy ass start position and approving of the effort to fight my way up into contention. Something about the atmosphere and supportive vibe made for a fun day - even if I never could quite reel in those lead 5 guys. My 15 year old nemesis from last week, Nate Moorse - won the juniors within our group - and was just ahead of me. I told him I'd try and find - and hold - his wheel early on tomorrow, at Day 2.

Glen's astute 'cross observation of the day: More so than in some other groups, but always important - is the start position, and the off-the-line effort. I was buried in an 8 or 9 guy wide start grid, smack in the middle - and even without the pile-up would have had to kill it to get up front. Lesson? Well - kill it to get up front asap! That is the lesson. I'm excited to soon be retiring from this nutty CAT3 group, and upgrading to CAT2 - where I will likely get crushed - but will not be taken out trying to NOT get crushed! That my friends, sounds a lot safer to this old guy / daddy bike racer.

Waiting for clean-up and the next day: 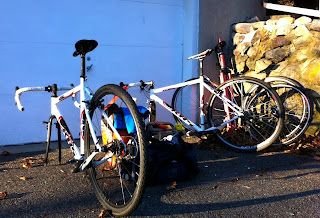