Jesus Christ on a bicycle.... that hurt. It was cold out, and I was strangely 'off' this past week, never feeling the pep like the week before. No less, family cheering section AND Racer-X crew were both out in full force, so let the game, er - race begin.


This was a fun course - it was long, but didn't feel that way (until the last 2 laps anyhow...) and mixed wide-open full-throttle sections with twisty grassy areas, and two wicked steep little climbs. Throw in some gravel, sidewalks, cowbells and an oddly wet and slick running track start/finish area, and that about sums it up. Why they hosed this fine gravel track down JUST prior to the start of our race is of some curiosity, as it made for a nasty grey grimy slick spray as we flew around at Mach 3 here. With a fabulous starting position, I had no excuses for surviving the first lap unharmed, so off we went, and I settled in with a sickly fast lead group of 6-8. 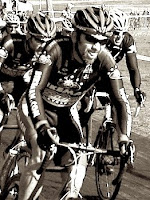 There were 3 bikeman.com guys KILLING it up front - and one of them pulled away from his two team mates and the rest of us, and was gone the whole race. The other two set a blistering pace anyhow, as did an Embrocation guy, and a few other dudes - and we slowly pulled away from the masses behind. It was an odd race, albeit fun - in that it had all Masters 35+ guys in there - from CAT4 to CAT1.

This is crazy - but how cool to line up with Jamie, Dave, Rob, and Andy? I was the rabbit out front, or the team worker bee setting them up tactically to be able to effectively "sit in" and let everyone else around them magically pull them around and around this powerful course and eventually up to our lead group, fresh and ready to sprint by us.

Well, that WAS the plan, right?

I gained a few spots, and at one point was likely in 4th or 5th place, but with 4 laps to go knew I would not have the legs to keep the pace up. To be more accurate, my legs were great, but the rest of me was having a hard time getting up and going. Must have been that oh-so-early start time of 9:45! I'm used to the late starts which perhaps messed with my mind/body readiness to race. No doubt my legs were cooked at the end - but they were not the limiter here. Eventually I caught the tallest dude on the course - riding a red flat bars and disk brake equipped contraption; I sat on his wheel for a moment, then came around hoping he'd stick to my wheel. He must have flatted or something.... poor bastard, er - Dave!

Finished up, regrouped with the family and headed to warmer climes, as they were all moaning and groaning for heat and food. Wound up 7th place, and see already that the Masters group(s) are the ones to hit for 2011/2012. With 2-3 more outings as a CAT3, I'll make the best fo the end of the season here - especially if I can clear this lung crusty nose stuffing cold crap. Next up: 2 Days of Sterling this weekend, the Warwick RI (at least 1 day), and then... the NEw England CX Championships mid-December.

Who else is rallying for a strong end of the year here? Remember, come March - this time period will seem like eons prior - and any lost / missed opportunity will hurt a lot worse then... so let's suck it up and kick some booty! 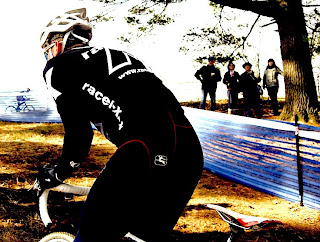